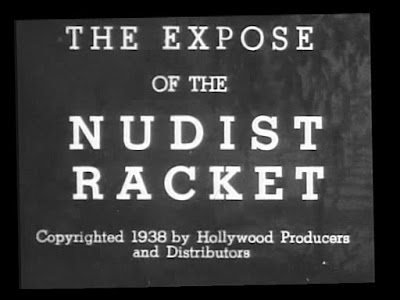 "Up until it was removed from the Internet Archives, and thus no longer embedded in our blog, Nightmare at Elm Manor (now accepted as a 1961 release), our Short Film of the Month for April 2014, a wonderfully kitsch, dreamy horror short, was undoubtedly the most breast-heavy short film found on a wasted life. (And what breasts they were, too: those of the all-around beautiful June Palmer [1 Aug 1940 – 6 Jan 2004] at the age of 21.) B&W and vintage and oddly atmospheric, the short film is surprisingly innocent and fun for revealing so much cheesecake. But then, age often takes the "sordid" out of once "seedy" films — see, for example, our innocent Short Film of the Month for June 2012, Unexpected Experience of Two Girl Hitch-Hikers (USA, 1940s, director unknown).

This month's Short Film of the Month, likewise vintage and definitely more ridiculous and odd than sleazy, gives Nightmare at Elm Manor a run for the money when it comes to breastage, despite being over two decades older than the June Palmer nudie-cutie short. Expose of the Nudist Racket is an early sexploitation "documentary" from the road show circuit, and as such an early forerunner of everything from the shockumenatries of the 60s & 70s (see R.I.P.: Gualtiero Jacopetti) to the white-coaters that paved the way for hardcore porn, not to mention the generally more demure (as in: no frontal nudity and men in shorts) feature-length nudist colony films that preceded the days of the feature length nudie-cuties of Russ Meyers and others. (See any given R.I.P. entries to the left on H.G. Lewis, Harry Novak and Harry Reems, as well as the entries on Babe of Yesteryear Gigi Darlene [Part I, II, III ,IV and V].) 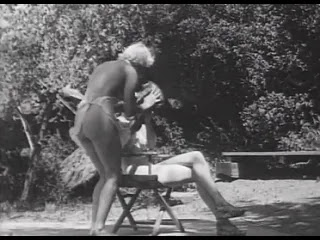 While nudism (or naturism) was around earlier in this or that form, modern nudism (or naturism), as an organized movement, "officially" began around 1929 when the German immigrant Kurt Barthel, "the father of the modern United States nudist movement", first founded the American League for Physical Culture (today the American Association for Nude Recreation) and then, in 1932, the first nudist camp of the United States, Sky Farm,* in New Jersey.** The uphill battle of the dedicated made for good press, and nudist documentaries of the less than sincere sort were soon to follow — for example: This Naked Age (1932), Why Nudism (1933), Elysia (Valley of the Nude) (1933 / full film), or the absolutely ridiculous Nude Ranch (1940 / full film).
* Not that it is relevant, but long ago a cousin of ours was co-owner of Berkshire Vista, back when it was still Birch Acres. Beautiful nature, there.
** Go here for a history of nudism/naturism. 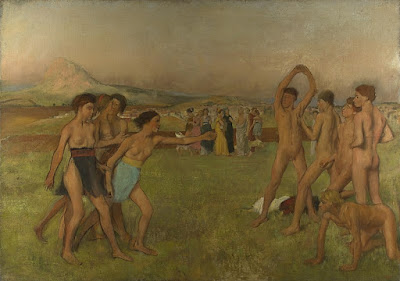 Young Spartans Exercising
by Edgar Degas (c. 1860)
Needless to say, most if not all such films were of sexploitation nature and made less to help the cause than to show naked people bounce around, and they were very much a staple of the road show circuit. Like this one, Expose of the Nudist Racket (incorrectly billed on the marquee in the picture below originally found at Reprobate Press as Nudist Racket Exposed), a ten-minute short lacking all directorial and writing credits produced and distributed by Hollywood Producers and Distributors. But it you don't have to be a rocket scientist to figure out who made the film: Hollywood Producers and Distributors was one of the firms founded by the great Dwain Esper (7 Oct 1894 – 18 Oct 1982) and his wife [Mollie] Hildagarde [Stadie] Esper (14 Jul 1895 – 21 Jul 1993), and Expose of the Nudist Racket also displays some obvious stylistic similarities to their exploitation product, most notably the dryly witty "square-up" (admonitory justification) that opens the film and the general tone of the voiceover. Thus, we are not going too far out on the limb to claim the unproven: Hildagarde probably wrote the film, but Dwain, a man (according to David F. Friedman) who had "balls of a life-size bronze stallion", surely directed it. 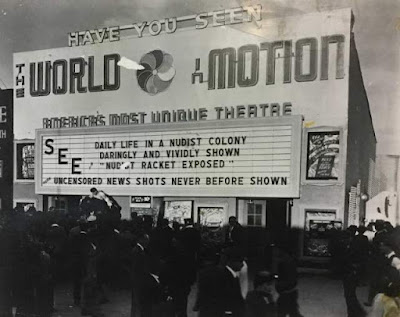 The Espers have been looked at before here at a wasted life. Their anti-masterpiece Maniac (1934) is a favorite of ours and even made it, after our first viewing, to our Ten Best in 2013 list. (2013 was a good year, film-viewing wise.) Likewise, some three years later, their 1937 short How to Undress in Front of Your Husband was presented as our Short Film of the Month for March 2016. When we stumbled on this short here, Expose of the Nudist Racket, "a vintage documentary look at the nudist lifestyle that is both enthusiastic and salacious [Reprobate Press]", we knew we had to make this fun, historic little piece of cinema trash a Short Film of the Month as well. 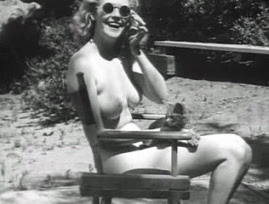 Unlike How to Undress, in which the names of those in front of the camera are known, the people seen in Expose of the Nudist Racket are to date (and will probably remain) unknown. What is notable, however, aside from the rare (even for today) flashes of full frontal nudity of both sexes,* is that but for one woman, the females showing their assets are substantially more attractive than those found in most "documentaries" featuring "real" nudists. (It should be noted that the men are surprisingly lithe and fit as well, with hardly a beer belly or saggy ass in sight.) This naturally gives speculation that the "nudists/ naturists" involved were less likely fans of the cause than wanna-be models or thespians, none of whom (as perhaps is to be expected) seem to have ever "made it". The singular exception to generally held contemporary standards of female beauty found in Expose of the Nudist Racket is, of course, the weight-challenged woman,** who is included specifically as the object of derision and laughter. We would tend to agree with Reprobate Press when they say, "[T]his once outrageous reel of film now seems rather charming and innocent — audiences now are more likely to be offended by the narrator's mockery of [the] overweight woman."
* Nudity, like all exploitation film staples, was no longer found in mainstream film at the time, as the Hayes Code had already been in effect since 1934.
** Was the PI wording good enough for you? 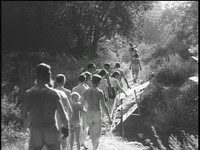