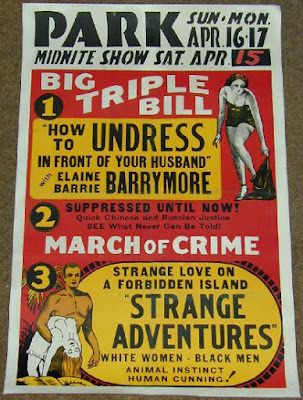 Poster thanks to The Cinema Masochist.

"I think this worry is about over, though. In a few moments, Trixie will fold up like a dump truck and call it a day. Yes, I was right. The dreadnought is about to drop anchor."
Narrator (Albert Van Antwerp) 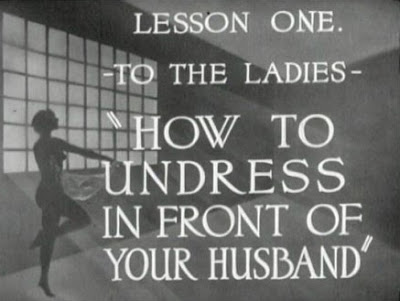 Another early "educational" blast from the past by those classic purveyors of road show sleaze, the great Dwain Esper (director) and his wife, Hildegarde Stadie ("adaptation"), the dynamic duo who also brought us one of our favorite "guilty pleasures", Maniac (1934). Maniac was one of the many movies we saw in 2013, and one of the select few that made it to our list of Ten Best in 2013. (And what a list it was, that year!) We even recommended this short here in our review of that slab of sublime celluloid trash, but we feel it time to finally present How to Undress in Front of Your Husband as our Film of the Month. Hard to believe that something this quaint was ever considered scandalous. It was made the same year as Esper & Stadie's other "educational" short How to Take a Bath, which, aside from supposedly featuring the same two leads, has entered the realm of the Lost Film (please check your attic).
Enjoy of Short Film of the Month for March 2016 —
How to Undress in Front of Your Husband:

As Dangerous Minds explains it, "The short film you’re about to take a look at is more than just a cheap, extraordinarily sexist exploitation film from 1937. Indeed, How to Undress in Front of Your Husband is most certainly that, but if you can put the stupidity of the attitudes expressed in the film aside momentarily, you’ll notice that it also happens to be surrounded by a bunch of weird, perhaps even interesting facts. Case in point: It involves the huckster distributer of  Reefer Madness (1936 / trailer / full film / remake [2005] trailer) and his salacious screen writing wife, the film bears a mysterious similarity to a LIFE magazine article featuring photos of ex-burlesque stripper, June St. Clair made in the same year, one of the lead characters (such as there are characters) is the fourth wife of John Barrymore and the other lead character was an ahead-of-her-time suffragette."
The wife of John Barrymore, his fourth and last, is of course Elaine Barrie (née Jacobs; 16 Jul 1915 — 1 Mar 2003); he was 37 years older and an alcoholic when they married. Her only known feature-film credit is Midnight (1939 / trailer), with her husband; later, she spent many years living as a "designer" on Haiti. 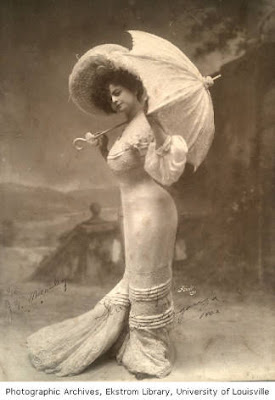 The other lead character, the full-figured "ahead-of-her-time suffragette" shown above, is Trixie Friganza (born Delia O'Callahan, 29 Nov 1870 — 27 Feb 1955), a one-time popular vaudevillian artist and stage actress who ended her years mostly forgotten and teaching at a convent school, which she also left all her worldly goods. According to Wikipedia, "During the height of her career, she used her fame to promote social, civic, and political issues of importance, such as self-love and the Suffragist movement." Friganza's appearance here is perhaps a bit sad, as it was in the twilight of her career (she was soon forced to retire due to health reasons), and while her (at the time politically incorrect) stage comedy act was built around her physical shortcomings, the film is more than degrading in its treatment of her, a woman who deserves more remembrance than she ever has received.
Trixie Friganza "sings"
The Girl from Honolulu:
Posted by Abraham at 11:02:00 AM