Okay, so this month's short is an advertisement. It's not like Christmas isn't a purely capitalist exercise nowadays, an event oriented alone towards emptying your pockets and making you think you're happy and you're life is good. And it's not like we haven't presented an advertisement as a Christmas short before, either: check out our short film for December 2018: Beauty of Horror – Christmas Claymation (USA, 2018). Advertisement. 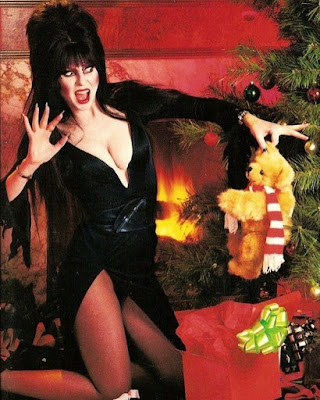 But like that claymation ad, this one here is special: it stars a claymation version one of our favorite wet dreams from the early eighties of the last century: Elvira, Mistress of the Dark. (Nowadays, when looking back, we wonder how we ever managed to get past that big hair, but then we see those haunting hills and we remember.)
Should you be one of the few, the rare, who don't know who Elvira is, well, Bloody Disgusting can fill you in: "[…] Elvira's Movie Macabre started in September of 1981 and ran for five seasons, launching the B-movie queen to pop culture icon status in short order. The first horror host to be syndicated nationally, Elvira's off-beat sense of humor, quick wit, and Valley girl persona complemented the B-horror movies featured in the episodes well. While she'd continue on to reign as the Queen of Halloween for decades with multiple movies, books, shows, music CDs, and more, Elvira eventually returned to Elvira's Movie Macabre for a revival in September of 2010. This time the films chosen were in public domain." 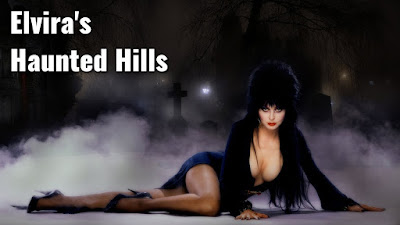 Aside from her presence on television, Elvira can be found in two highly entertaining movies, Elvira: Mistress of the Dark (1988 / trailer) and Elvira's Haunted Hills (2001 / trailer). When Elvira isn't being Elvira, she pretends to be the actress and model Cassandra Peterson, of The Working Girls (1974 / trailer below) and a lot of nude photographs featuring something called pubic hair…
Trailer to
The Working Girls (1974):
This month's "short film" originally ran as part of Elivra's 2010 Christmas screening of the perennial Christmas movie anti-classic, Santa Claus Conquers the Martians (1964 / trailer / full film), from director Nicholas Webster (24 July 1912 – 12 Aug 2006), whose other treasured cinematic anti-classic is the somewhat less wonderfully dreadful science fiction film Mission Mars (1968 / trailer). 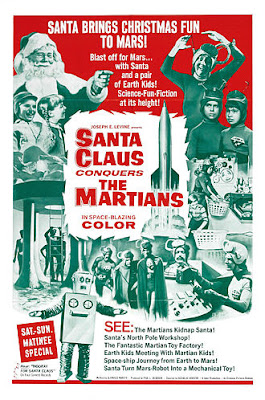 But to return to Webster's Santa Claus, that disasterpiece not only features the first known cinematic appearance of Mrs. Claus (played by Doris Rich [14 Aug 1901 – Feb 1980], it also features  the cinematic debut of that American cultural treasure known as Pia Zadora (of Fake Out a.k.a. Nevada Heat [1982 / trailer]) playing the little Martian lass named Girmar. ["In 2000, Zadora was nominated at the 20th Golden Raspberry Awards as Worst Actress of the Century, ultimately losing to Madonna." (Wikipedia)]
Pia Zadora & Jermaine Jackson (who?) —
When the Rain Begins to Fall (1983)
Bloody Disgusting points out that the wonderful little short way above is a Chiodo Bros. Production. "The Chiodo Brothers (Stephen, Charles & Edward Chiodo) are an American trio of sibling special effects artists specializing in clay modeling, creature creation, stop motion and animatronics. [Wikipedia]" Occasionally they also produce their own movies, with Stephen as the credited director: they are the creative power behind that classic cult film that is Killer Klowns from Outer Space (1988 / trailer) — for a long time a sequel, entitled The Return of the Killer Klowns from Outer Space in 3D, was trapped in pre-production hell, but it officially died when Disney took over 21st Century Fox — and the super kiddy-friendly, 40-min Christmas toddler flick at Netfux known as Alien Xmas (2020 / trailer). They also produced the following short for an episode of a popular TV series…
Oh Pruny Night
For further Christmas fun, check out these other season-themed Short Films of the Month:
December 2019: Oh Christmas Tree (USA)
Dec 2018: Beauty of Horror – Christmas Claymation (USA, 2018)
December 2017: Winter Stalker (USA, 2010)
December 2016: Santa (Greece, 2013)
December 2015: The Living Want Me Dead (USA, 2010)
December 2014: Father Christmas (Canada, 2011)
December 2013: A Very Zombie Holiday (2010)
December 2012: Treevenge
December 2010: X-Mess Detritus
Posted by Abraham at 11:34:00 AM