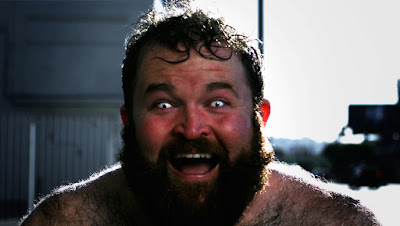 "Remember kids, synthetic drugs are all fun and games until somebody loses an ear."
Gizmodo


A short written and directed by Robert Boocheck, who was born 1 September 1976 and has a killer smile. (That's not him above; that's the main character of the short.)
To simply quote the bio — minor grammar fails and all — at the website to Honor Society, "a fully integrated production company telling stories with passion, bravery, and intelligence, no matter the style, technique, or medium": "Boocheck began his film career working for director Sam Raimi. He went on to direct music videos for seminal punk and indie bands such as Bad Religion and Death Cab for Cutie. His video work garnered a ton of acclaim and was even featured as an exhibit at the MOCA in Los Angeles. He has directed campaigns for major brands such as Google, State Farm, Toyota, and Ray Ban. […] He also has a segment in the popular cult horror anthology, The ABCs of Death 2 (2014 / trailer). Aside from all that fancy stuff, he's a Dad currently living in Brooklyn who makes street art in his spare time."
M Is for Masticate is actually Boocheck's segment in The ABCs of Death 2.
The ABCs anthology films each comprise a collection of 26 different shorts, one for each letter of the English alphabet, each by a different director, known and unknown. Both the first, The ABCs of Death (2012 / trailer), and the second, The ABCs of Death 2 (2014), involved a contest for the 26th director: Boocheck was the winner for ABCs 2. (Interestingly enough, albeit unintentionally, here at A Wasted Life we chose Lee Hardcastle's Ghost Burger (2013), the sequel to his winning short of the contest for the first ABCs film, T is for Toilet, as our Short Film of the Month for September 2016.)
A third anthology movie, The ABCs of Death 2.5 (2016 / trailer), has since been cobbled together from all the unused "M" submissions for the 26th segment of ABC 2.
Well shot and well edited, that and the on-the-spot sound do wonders to make this short film the little gem that it is. And while M Is for Masticate plays out like an arty zombie flick, it packs a nice little twist at the end that would have Sid Davis — see the Short Film of the Month for January 2017, Seduction of the Innocent (1961) as well as the one for for September 2013, Boys' Beware (1961) — proud. Enjoy.


M IS FOR MASTICATE from Robert Boocheck on Vimeo.