This amazing film by the Italian artist BLU is “an ambiguous animation painted on public walls” filmed in Buenos Aires (Brazil) and in Baden (Germany). An amazing technical and visual feat, the film comes across less as an animated film than as the documentation of a painting that never stops developing and changing – although more than one beautiful image is lost to the further development of the piece itself. BLU has a pretty interesting website that invites one to peruse and look around, but it supplies relatively concrete info about the man himself, who obviously gets around a lot as a street artist. Some fine examples of his murals – including the big one here in Berlin that I often go by when riding the subway – can be found here. 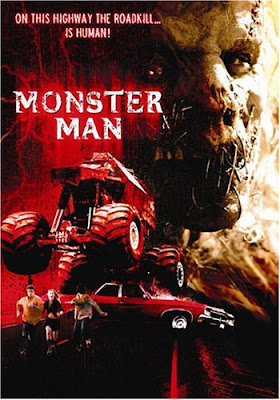 "Dude I think you just ate somebody."

Prior to Monster Man, director Michael Davis gained his experience by directing a variety of mostly lame and forgettable teen-exploitation sex comedies, namely Eight Days a Week (1997 / trailer), 100 Girls (2000 / trailer) and Girl Fever (2002 / trailer). Not exactly an auspicious past for a director to have when it comes to making a successful gore comedy, and, in fact, after roughly the first half-hour of Monster Man the viewer is pretty much convinced that Michael Davis definitely tackled the wrong genre for his fifth directorial attempt. But then, something unexpected happens! Monster Man becomes just the type of trash that makes for a fun beer-drenched night with the guys. And in no short order it becomes easy to understand how Davis then went on to make a much more tasteful but just as fun A-budget B-film like Shoot 'Em Up (2007 / trailer). 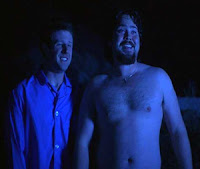 Much like his lame sex comedies, the lead males of Monster Man are geeks, the type of guys that you’d only invite to a party ‘cause you feel sorry for them. Adam (Eric Jungmann, last seen in Killer Pad [2008/ trailer]) is driving across country to the wedding of Betty-Ann, the great love that got away. Unbeknownst to him, is old bud Harley (Justin Urich, last seen in Lake Placid 2 [2007 / trailer]), an overweight and obnoxious loudmouth, has stowed away in the back seat. Buds being buds, after a lot of unfunny stuff they continue the journey together, during which they do and say a lot of other unfunny stuff which is meant to be funny – a running joke about a minor piece of trivia regarding the supposed true meaning of the name "Rosebud" as originally revealed by Gore Vidal in 1989 and repeated in The American Experience, a 1996 documentary, for example, is dragged out like a month of Sunday School lectures.

Things pick up, however, as of the rather tasteless scene combining roadkill with Harley’s dreaming that he's going down on non-waxed women; at that point, the film takes the right turn off the road straight into fine and unrepentant trash tastelessness and gore. And once the two dudes pick-up the unrealistically hot hitchhiker Sarah (Aimee Brooks, whose film debut at the age of 12 was Sorority House Massacre [1986 / trailer] and whose last film of note is The Mangler Reborn [2005 / trailer]) with her push-up bra and high-heel boots and the three then get lost on backroads populated only by amputated hillbillies, the film finally turns into something truly funny and hilariously gory.

OK, the film isn’t as consistently excessive in tastelessness and gore as, say, vintage Peter Jackson – basically his first three films: Bad Taste (1987 / trailer), Meet the Feebles (1989 / trailer) and the classic Braindead (1992 / trailer) – but once director Michael Davis introduces a monster truck driven by a monster man and finally tones down on the un-funny frat-house banter and ups the dosage of violence and blood, Monster Man achieves a consistent hilarity and vulgarity that truly saves the film. It’s just a shame that Aimee Brooks obviously had a no-nudity clause in her contract, for the film’s only sex scene never even gets her fully out of her clothes, much less her bra.

In short, Monster Man is an odd combination of frat boy road movie and psycho trucker film that veers off at the end into the territory of in-bred killer hillbillies, all the while serving up big portions of bad-taste humour and more than enough blood and gore. Much like a kettle of cold water on a hot stove, the flick takes awhile to get hot, but once it boils it boils. 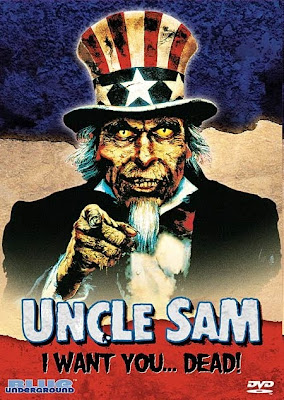 The concept itself – a homicidal Desert Storm trooper killed in action by friendly fire comes back from the dead to kill the unpatriotic (and anyone else he sees fit) during a July 4th celebration in his hometown – is rather nifty and should have been a perfect vehicle for some sublime social criticism, great slaughter and entertaining laughs, but even if the social criticism remains present due to the plot alone, the laughs also remain relatively few and both the narrative and the slaughter veers way too often into the dilettantish (a man who dies from a bee-bee gunshot in the head?). And the entire subplot of a wheelchair-bound boy with a sudden psychic connection to the marauding un-dead Uncle Sam pretty much manages to push the flick off the deep end into the realm of total crap, despite a number of above-average performances by most of the cast, a few inspired deaths and Lustig's smart directorial eye.

Uncle Sam opens in the Persian Gulf (California, actually) where the Sam Harper (David Fralick) sits dead in the burnt remains of his machine, which was shot down by friendly fire. Though dead, he undeads long enough to kill a few military men on-site as he quips "Don't be afraid, it's only friendly fire." Move forward a couple of months to some summertime California town where kids still attend school in July, Sam’s burnt and mummified body is returned to his family and his casket set up for mourning in the living room (they sure must have some damn good air freshener). Sam's nephew Jody Baker (Christopher Ogden), a definite future Republican and NRA member, is about the only person that misses the man and regrets his death, but in no time flat his scorched Uncle Sam (now played by the unrecognisable B-movie king William Smith) crawls forth from his casket to do his American duty of killing everyone who doesn’t meet his approval.

The scene in which he gains his Uncle Sam costume, taken from a peeping tom on stilts (the image left shows him in action), is probably the most surreally effective of the film (while the later death of a policeman is the most affective), but little of the film as a whole holds either water or the attention of the viewer. OK, perhaps the concept of 'holding water' is immaterial when talking of a film about a homicidal dead soldier that revives for no reason and then leaves a trial of bodies behind him, but why the psychic kid? And, really, an ornamental canon that still shoots real cannon balls? (That, seemingly, the average vet janitor with a gimp leg [the late, great Isaac Hayes] has a handful of.) And while we all know cars explode at the tap of a bumper, since when do houses explode when hit by a cannon ball?

Any film that makes the viewer glance at the DVD timer to see how much longer it’s going to go on is a failure, and Uncle Sam definitely causes one to do so. OK, there are worse films out there – anything starring Richard Grieco, for example, as Webs (2003) or Raiders of the Damned (2005), to name but two of his films, both amply demonstrate – but one has expectations when the names Larry Cohen and William Lustig head the credits. And with the exception of the fluid camera work – and a cast of interesting genre names (including Bo Hopkins, P.J. Soles and Robert Preston) – Uncle Sam really doesn’t fulfil any of them.
Posted by Abraham at 6:16:00 PM No comments: