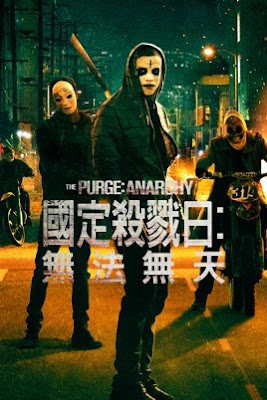 It is easy to see why the sequel to 2013's The Purge enjoys greater popularity than its predecessor. It's not because it's a better film — it's not, if you're looking for a movie with a message — but it is definitely a more traditional action cum horror movie of the hunt-the-human genre begun with, dunno, the first version of The Most Dangerous Game (1932 / complete film). Whereas the first Purge movie, one much more in the tradition of the home-invasion flick, still spent energy on the somewhat didactic exploration of the philosophical question of complacency and compliancy, The Purge: Anarchy, having the advantage of a pre-built context and world, might still offer a few superficial head-nods to one or the other unpunctuated semi-questions regarding guilt and morality, but is really far more interested in simply being a well-made survive-the-night action movie that follows a checklist of scenes. This time around, however, the narrative moves through the lower echelons of a society that is, perhaps, but a few goosesteps away from what America could easily become and, to an extent, already is.
Trailer to
The Purge: Anarchy
In Purge: Anarchy, instead of a well-to-do neoliberal family confronted by a system they make money from, we are given a variety of salt-of-the-earth individuals with just enough generic background story to allow us to find points of identification in them. We have the hardworking, single-mom Eva (Carmen Ejogo of It Comes at Night [2017 / trailer]) and her daughter Cali (Kielo Sanchez), the mom doomed to the minimum wage, ends-never-meet life familiar to so many in the US. First the two are confronted by the an unexpected Purge-related personal tragedy, and then by macho sexual entitlement, before the real reason (i.e., the governmental conspiracy to cull the lower classes) forces them onto the streets on Purge Night. Then we meet Shane (Zach Gilford of The Last Stand [2013 / trailer] and The Last Winter [2006 / trailer]) and Liz (Kiele Sanchez of A Perfect Getaway [2009 / trailer]), a young married couple on the brink of separation who, for some odd reason, are still underway two hours before lockdown and get stuck downtown when their sabotaged car breaks down. And finally, we meet Sergeant (Frank Grillo of Hell on the Border [2019 / trailer] and the Wes Craven car wreck known as My Soul to Take [2010 / trailer]), a former cop and man of some means who functions as movie's unbelievable dues-ex-machina character: he gets distracted from his personal mission of revenge, the killing of the drunk driver who killed his son, and ends up the unwilling leader of the motley group as they make their way through the murderous masses and insanities of the after hours. And as the five do plod onwards, people drop left and right around them, but the quintet proves harder to kill than you or we would probably be. 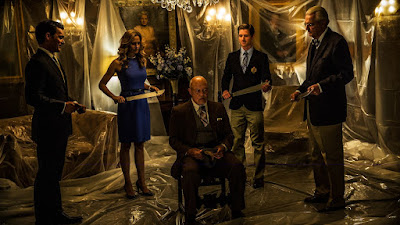 Good set pieces, horrifically fun costumes, (predictably) unpredictable twists and a lot of shooting propels the movie forward, keeping the viewer tensed and on the edge of the seat despite the occasional unsatisfying turn (like not seeing what happens to the Grand Dame [Judith McConnell of The Doll Squad (1973 / trailer), The Thirsty Dead (1973 / full movie) and The Brotherhood of Satan (1971 / trailer)] that Sergeant lets run). The end result: a tense film, a fun film, a mostly intellectually empty film that jettisons much of the first's message and offers well-made and well-timed entertainment following a familiar pattern… and a groaner of an ending meant to underscore the Sarge's own personal redemption. 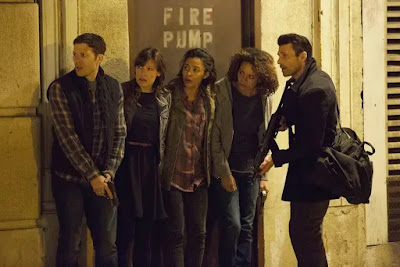 If there is a message to the movie, it might be that aside from the upper echelons feeding from the lower, all echelons are capable of being infected by such a moral and social rot that, in the end, the average person has little if any humanity left within them. After all, it is our right to be fuckwads, as per the Constitution. In Purge: Anarchy, it is not just the rich that are out to destroy the lower classes, the poor are cannibalizing themselves as well, with those that simply want to survive, to live, are at victim of both. The America shown in the movie, an America that is oddly familiar in so many ways, is a society and a nation that is too sick to ever be great [again], in part because it's a society and a nation that prefers to ignore its own illness. 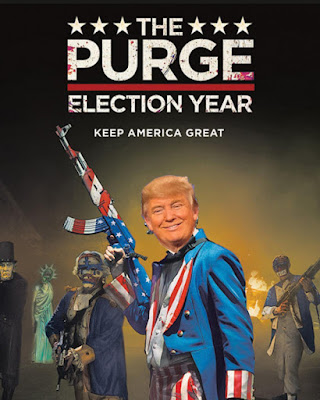