Among the selection of fine blogs we have listed under list of Blogs for Wasted Lives found at the [right] side of this blog is The Dwrayger Dungeon, otherwise seen on the list as 13. Coincidentally, that fine blog began the same year as this one, in 2007, and is still going strong — stronger than a wasted life, to be sure, going by the number of entries it has every year. Would positively give us size envy, were it not that our entries are invariably longer. That aside, the Dungeon's quickies tend to be fun if fluffy, often introduce us to fun stuff or remind us of fun stuff we've forgotten, and always entertain. Check that great blog out if you don't already know it. 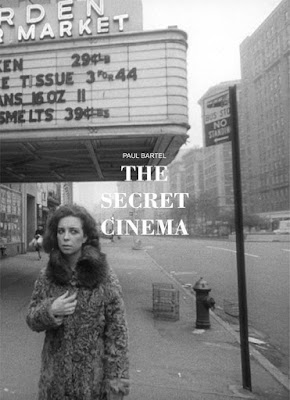 Next month, in February, our Short Film of the Month will take a look at something the Dungeon introduced us to, but this month, for January's Short Film of the Month, we want to take a look at a short film we saw long ago and the Dungeon reminded us about: the first film directed by Paul Bartel* (6 Aug 1938 – 13 May 13 2000) that made any waves, the low budget B&W short film from 1968, The Secret Cinema, "a paranoid delusional fantasy of self-referential cinema" that — to quote the ever quotable Steven Puchalski from his great book, Slimetime: A Guide to Sleazy, Mindless Movies — is also "a nightmarish, pitch-black chunk of nervous laughs" and "a wild, psycho trip of calculated mental sadism". 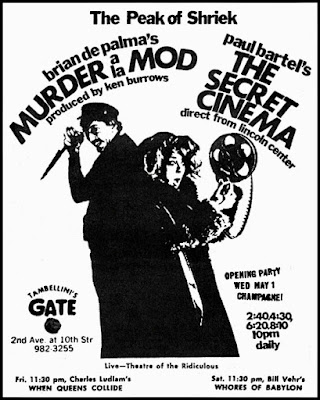 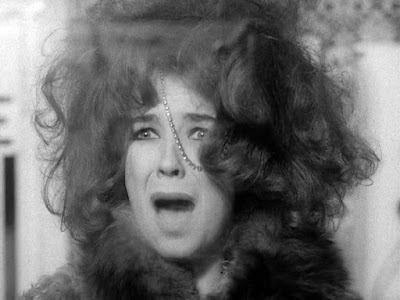 Over at All Movie, Hal Erickson has a plot description for The Secret Cinema that is a bit less blow-by-blow that that found at The Dwrayger Dungeon: "Almost 30 years before Peter Weir brought us The Truman Show (1998 / trailer), cinematic cult figure Paul Bartel [...] was the 30-year-old auteur of this half-hour film, a somewhat sleazy bit of surrealism on a similar subject. Amy Vane** plays [Jane,] a woman whose every move is recorded on film. She didn't ask for this scrutiny: the woman is the victim of a voyeuristic director (Barry Dennen [22 Feb 1938 – 26 Sept 2017] of Madhouse [1974 / trailer] and Jesus Christ Superstar*** [1973 / trailer]), who contrives to hide cameras wherever she goes and show the results in a theater. It is just as warped as it sounds, but it has its own peculiar appeal." 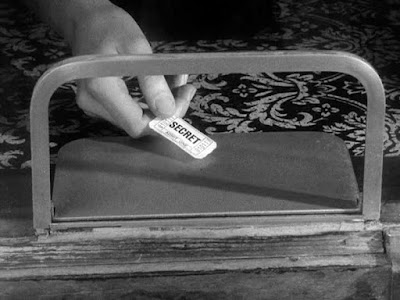 The Secret Cinema:
BTW: Bartel's follow-up film, the entertaining color short Naughty Nurse [1969], which Hal Erickson prudishly describes as "a 7-minute chunk of erotica that is best ignored", can be found twice at a wasted life: once in the meandering entry R.I.P.: Harry Reems, Part VII (1986-2013) (from 19 March 2014) and then again in the meandering entry R.I.P. Dick Miller, Part IV: 1974-76 (from 12 July 2019). Naughty Nurse, like this The Secret Cinema, features sexual twists that hardly shock nowadays but were rather risqué, if not outrageous, in their day. Considering the time The Secret Cinema was made, for example, it was probably positively shocking that Jane's boyfriend not only might infer at one point that he is gay but also appears to be having an affair with Jane's Afro-American best friend.***** 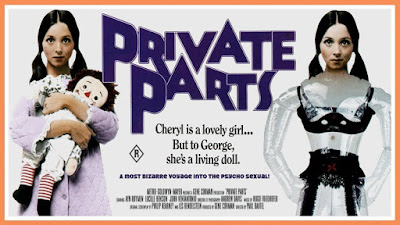 * Cult director and actor Paul Bartel, as you should know, was involved in a noteworthy film or two. His feature-length directorial debut Private Parts (1972 / poster above & trailer below) is a classic shocker, the type of film that just couldn't get made today, and well worth searching out. Death Race 2000 (1975 / trailer) is an exploitation classic, and while Lust in the Dust (1985) is far from perfect, it is fun enough. As an actor, he is some of the fish food in Piranha (1978) and appears in (among many flicks) the sorely underappreciated bodycounter Killer Party (1986 / trailer). He remade Secret Cinema in 1986 as an episode of Amazing Stories (1985-87 / German trailer), for which he also took on the role of the devious psychiatrist Dr. Shreck, Jane's shrink, the man behind the whole thing. The newer version, though good enough for a TV episode, is an argument for needlessness of remakes, and how sometimes the magic of a specific film simply cannot be replicated anew or improved upon.

Trailer to
Private Parts:
** Amy Vane, born in California around 1939, never appeared in another film. Over at Theater Sounds, back in 2005 they told a bit about her life: "Amy Vane-Goldbaum AMY VANE-GOLDBAUM is not eighty, yet, but she does vaguely remember life before the Second World War. She was a Theater, Radio/TV major at UCLA and apprenticed at the Laguna Beach Playhouse one summer. Ben Hecht sent her sandwiches. She worked as costume mistress and understudy for Theatre Group at UCLA under John Houseman. She went to New York City, of course, and became a puppeteer and starred in an early independent film called The Secret Cinema, directed by the late Paul Bartel. It was shown at the London and NYC film festivals in the late 60s and became a minor cult classic. She studied the Miesner Method with the late Jim Tuttle. She left the city for the country and got her Miesner Method straightened out by the very great Beverly Brumm in Ulster County, New York. She is now retired but for years produced and performed marionette plays as Herrick Marionettes and hand puppet plays as Vane & Co, for children, appearing in New York City frequently at the Lenny Suib Theatre up at the Asphalt Green and even once at the Fraunces Tavern." As late as 2017, she was obviously still alive, for she donated $200 to a Dan Savage Go Fund Me project pertaining to The Secret Cinema, and here it shows she was still kicking in 2018.
*** As Pontius Pilate he does the counting heard in the trailer to a film which features the big screen debut of the "iconic" Golden Age penis Paul Thomas as Peter. The movie — like the original stage production, actually — was and is of course in no way subliminally or overtly racist in its casting of its only truly visible Afro American cast member, Carl Anderson (27 Feb 1945 – 23 Feb 2004) in the film and Ben Vereen (of Gas-s-s-s [1970 / trailer]) in the original stage production, as the traitorous Judas.
**** Hans Solo shot first!
***** Stonewall only happened in 1969, and the Supreme Court case Loving vs. Virginia was only decided in 1967, up to which point "misegration" was still illegal in 16 states.
Posted by Abraham at 12:17:00 PM