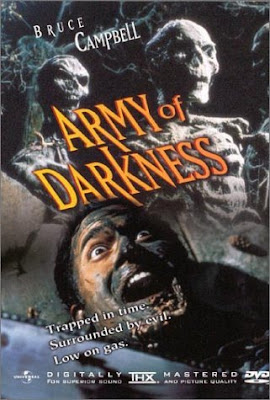 Oh woe is the evil called Hollywood. So much creativity has died in its shadow—given a chance, it seems that the favorite pastime of those that pull the strings in Tinsel Town is to suck the imaginative talent out of the brains of the truly inspired and replace it with spam. Director Sam Rami is a good example of this: Long before he got stuck in Marvel's increasingly inconsequential Spiderman franchise, he actually displayed a seemingly endless and exuberant creative vision... But then, nothing good lasts forever.
As an unknown low-budget horror filmmaker from the state of Michigan, Rami initially caused some big waves amongst horror fans (and attentive critics) with a flick entitled The Evil Dead (1981/trailer), a brilliant, supper-low-budget gore masterpiece that featured trees that rape and mashed-corn ooze and a lot of humor and carnage and some of the best camera work ever to be seen in the sordid movie theaters where the film initially ran.

By the time he decided, for reasons unknown, to become a "serious" filmmaker and Hollywood-game-player with A Simple Plan (1998) and the embarrassingly crappy (gag, puke) For the Love of the Game (1999), Rami had done a whole slew of imaginatively fun and surprising films—namely: Crimewave (1985/trailer), a uniquely weird comedy (written by the Coen Brothers) with a few second-rate and forgotten names (Bryon James and Louie Lasser, for example); Evil Dead II (1987/trailer), which was less a sequel than an inspired and bloodily hilarious remake; Darkman (1990/trailer), 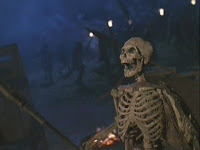 a fun but relatively inconsequential filmic comic book; The Quick & The Dead (1995/ trailer), a star-studded and campy homage to Spaghetti Westerns; and, three years prior to the last-mentioned film, Army of Darkness (1992/trailer), the third installment of his Evil Dead trilogy and an unabashed horror slapstick and paean of love to an uncountable number of popular films and film genres.
Army of Darkness more-or-less takes up where Evil Dead II ends. (Due to legal reasons, however, the prologue shown consists of re-shot footage instead of re-edited original scenes.) In short, having successfully defended himself against the evil dead in a back-woods log cabin, ordinary-Joe Ash (Bruce Campbell, in what should have been a career-making turn

1OK, it did help cement his reputation amongst genre enthusiasts, and it can hardly be said that he hasn’t had a viable career since then, but damn, the way he steals the film should have opened more doors than it obviously did at the time.