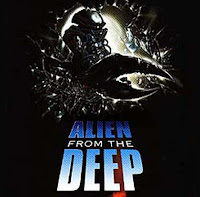 Also known as: Das Alien aus der tiefe (Germany) / Alien from the Deep (USA)
Anyone who has a bit more than a slight passing interest in Italo trash film knows the name "Anthony M. Dawson" as the most popular "international" pseudonym of the productive Italian (primarily trash) filmmaker Antonio Margheriti. Dawson/ Margheriti, who died of a heart attack on 04 November 2002, had probably some sixty films spanning the entire spectrum of popular genres to his credit by the time he went the way of the wind (horror, western, adventure, crime, science fiction, peplum – you name it, he made it). As to be expected when one has an output as prodigious as his, his films, which were from their innate nature already of the lower echelons, often varied in quality; nonetheless, his name graces some true Eurotrash "classics"– including such gothic favorites as La Vergine di Norimberga/The Virgin of Nuremburg (1963), the original Danza macabra/Castle of Blood (1964, w/Barbara Steele) and its more popular but indefinitely trashier remake with Klaus Kinski Nella stretta morsa del ragno/Web of the Spider (1971), the finely cheesy La Morte negli occhi del gatto/Seven Deaths in the Cat's Eye (1973) and the legendary Apocalypse domain/Cannibal Apocalypse (1980).

(Better films than this one, one and all.)
1989’s Alien degli abissi/Alien from the Deep was one of his last productions and is one of his least known – and not without reason. Despite having been written by Tito Carpi, a true master of Italo sleazy and trash – his "writing talents" helped bring some truly unadulterated and enjoyable Italo flotsam to the screen (including Enzo G. Castellari's Sinbad of the Seven Seas (1989)and Escape from the Bronx (1983), Joe D’Amato's Ladies' Doctor (1977) and The Pleasure Shop on 7th Avenue (1979), and Ruggero Deodato's Raiders of Atlantis (1983) and Jungle Holocaust (1977)) – Alien from the Deep is a rather uninteresting and pedestrian low-budget fusion of Sci-Fi monster flick and jungle action lightly peppered with an ecological message of some indefinable sort.

The film's title is of course an intentional reference to Ridley Scott’s much better Alien (1979), from which Margheriti's flick lifts a few minor details and ideas (including acid alien blood and gratuitous scenes of the heroine running around in their underwear, while the big showdown in Alien from the Deep is in turn actually a low-budget version of the final confrontation in James Cameron’s sequel, Aliens (1986)). But seeing that originality is not a trait one usually expects in Italian trash film, anyways, his sources are immaterial.
In Alien from the Deep, two environmentalists sneak onto some tropical island with a volcano because they have heard that the E-Chem plant isn't being run kosher. They get discovered as they videotape evidence that the plant is dumping atomic waste directly into the island’s active volcano, but whereas Lee the Cameraman (Robert Marius) gets caught, Jane the Heroine (Marina Giulia Cavalli) escapes into the jungle with all sorts of nasty mercenaries hot on her tail. For no apparent reason she is assisted by Bob,

a snake venom harvester on the island (Danile Bosch, in his second and only film after starring in the Italian art house hit Good Morning, Babylon (1987); currently he is bearded and a pastor at the Worldwide Church of God in Sardinia, Italy). To the anger of Colonel Kovacks, the big nasty who runs the plant (good old Charles Napier, whose acting hasn’t improved at all since the days he was one of Russ Meyers' coterie of regulars), they actually save Lee, but before they can leave the island an alien claw is drawn by the atomic waste to the location and kills Lee. See Jane run! See Bob run! Run, Jane, run! Run, Bob, run! One by one the alien kills the bad guys until its only Jane and Bob against the Colonel, but then he dies too so they can have a go at the alien; about this time we learn there is more to the alien than just a claw, but this doesn't make it any more convincing or scary. Do they manage to push the alien into the volcano and thus save the day? Well, what do you think?

Both Margheriti and Tito Carpi were seemingly on autopilot when they cobbled Alien from the Deep together, for the only thing the film truly excels in is its own mediocrity. Neither exciting nor very well made, it is also never becomes trashy or bad enough to transcend its innate mediocrity and become all that fun. In the end, the film is good for a laugh or two and also has some occasional (dated) gore but remains little more than a time waster... but there being so many better time wasters out there, there is really no reason to waste your time on it. Go for one of Margheriti’s earlier movies instead.
Posted by Abraham at 6:03:00 PM