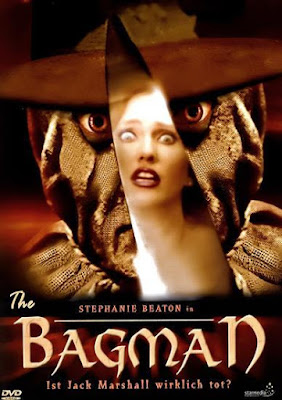 Long-time readers of a wasted life — Are there any aside from you, Mom? Oh, wait: you're dead, so there probably aren't any... — might possibly, doubtfully, remember an amazing flick that truly stunned us back in 2015, the "video nasty" (Not!) entitled Frozen Scream. Directed by a nobody named Frank Roach, the film was the first filmic baby of Renee Harmon (18 May 1927 – 26 Nov 2006), a spectacularly Teutonic-accented and untalented producer, scriptwriter, actor, whatever whose independent productions universally display a signature anti-style that reveals her to be a kind of cinema-obsessed Mrs. Miller.
Mrs. Miller sings
These Boots Are Made for Walking:
Back when we wrote about the memorable experience that is Frozen Scream, among other things we said that the movie "is one of those movies that is so bad, so incompetent, so unbelievably what-the-fuck that it makes most Ed Wood films look professional in comparison. One is tempted to simply write it off as 'what-were-they-thinking, oh-they-needed-a-tax-deduction' trash, but, in truth, although an unbelievably inept film, [Frozen Scream] displays an earnestness shared by all those involved that, regardless of the respective lack of talent, makes the viewer realize that the people involved in the project were probably truly serious about it." It is a sentiment we share with the shot-on-video bodycounter Bagman, a film that has a few similarities with the shot-on-film sci-fi horror, Frozen Scream. 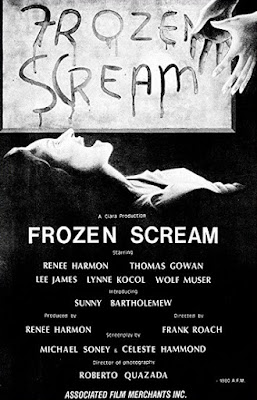 Like Frozen Scream, Bagman is the product of a mover-and-shaker female filmmaker, in this case the lower-echelon "Scream Queen" Stephanie Beaton who, much like Harmon, decided to make star projects for herself instead of just waiting for any role at all whenever luck would have it. (Luck is rare, as we all know.) Beaton, like Harmon, is arguably "buxom and attractive", and like Harmon she has her finger in every slice of the pie (script, production, acting, whatever) of her first self-produced project. (Frozen Scream was likewise Harmon's first project, but its reported budget of $20,000 probably exceeds The Bagman's by a ten or twenty thousand.) Like Harmon's, Beaton's home products did little to advance her movie career, which is perhaps why (like Harmon), Beaton's filmic presence pretty much ended after a few years.* 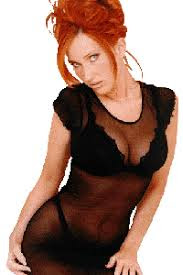 * Imdb rumor has it that Beaton might be returning to genre films soon with another shot-on-video, no-budget production entitled Beast (planned release date unknown). 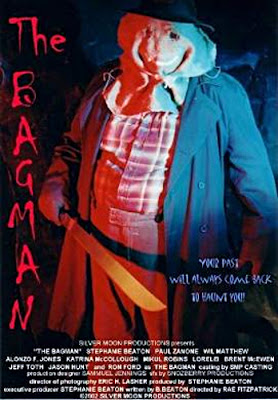 But whereas Frozen Scream's script quickly beams into bonkersville, The Bagman's bodycount narrative is predictably and boringly by-the-number — so much so that, unlike any other movie we have viewed to date (including Shark Week [2012] and Mega Shark vs Crocosaurus [2010]), it literally put us to sleep. Indeed, we missed whole swathes of the movie; not only that, but discussions held after the four-person group screening where we watched The Bagman revealed that all four of us drifted off at one point or another, enough so that not one of the seven deaths was caught by all four of us at the same time. 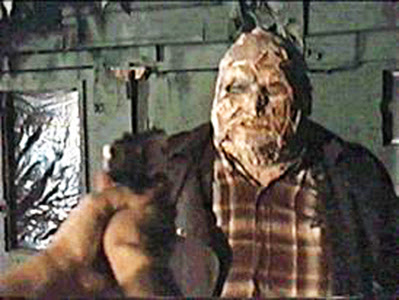 So, one thing for sure: the screening experience of The Bagman is memorable in a completely different way to that of Frozen Scream... regrettably, not in a way that would make it recommendable. 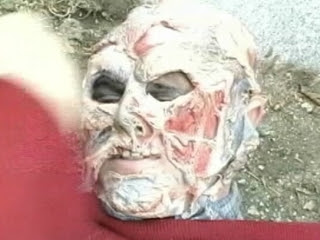 Like thousands of bodycounters before it, The Bagman plot concerns a group of people that cause a death that they keep secret but then, ten years later, seems to be at the heart of the serial demise of the members of the said group. Here, a unisex bunch of dick-ass classmates (including the token Afro-American, who, naturally, turns out to be the first to go as an adult) chase, harass, and then kill fellow student Jack Marshall, a badly-scarred youth whose ugly disfigurement is the result of a house fire that killed his parents.* But, wait! After covering his face with a burlap bag and drowning him and swearing themselves into secrecy, the body disappears almost in front of their eyes! (Not that any of them seem to notice or care.) 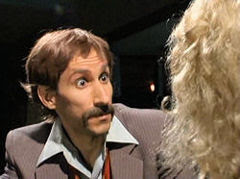 * "To be clear about how unsympathetic these characters are, they are picking on a kid who survived a fire that burned his house to the ground and killed both his parents. Yes, they're tormenting an orphaned, homeless kid with skin grafts. [Haunted Monkey Paw Island]" 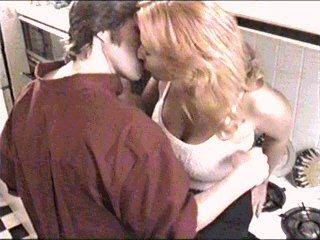 The whole introductory scene, an incompetently shot and acted reiteration of a generic, basic opening found in films, all undoubtedly better, ranging from before Homicidal (1961 / trailer) or [put title of your choice here] and up to well past Prom Night (1980 / trailer) or I Know What You Did Last Summer (1996 / trailer) or [put title of your choice here], is as "professional" and non-effective as the rest of the movie, which takes place ten years later. That part of the flick opens with an oddly laughable sex scene on a cooking stove during which final gal Sue Creswell (Stephanie Beaton) displays her bodaciously proportioned chesticles before turning harpy and breaking up with her loser artist boyfriend. This leads her to returning back to her hometown and reuniting with her frenemies and the sudden appearance of the Bagman (Ron Ford of Camp Blood [2000]), a fat guy wearing the same bag over his face that Marshall "died" wearing, and the ten-little-Indian progression of dead young adults plus doggy and white-trash lady that follows. 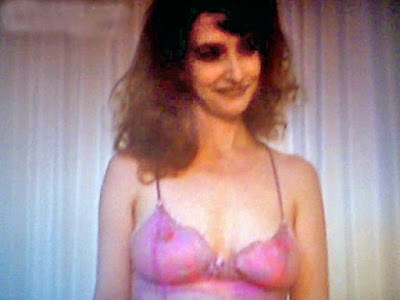 We awoke for a few deaths, including that of the doggy, but missed for example the double deed that followed the film's second sex scene (image of the bra-wearing female victim above), which we slept through. Nothing that we saw in The Bagman when awake was filmed in a way that evidenced directorial competence or creative aspirations, and the acting ranged from passable (the girl who bites the dust in the cemetery was OK) to jaw-droppingly horrible (some white guy who dies). Amidst it all, it must be said that Stephanie Beaton comes across the best: she never completely drops the thespian baton, even when she tips into camp, and at least for the scenes we caught between dozes she was as believable as a mildly talented local-TV actress, if somewhat fuller in figure. (Damn! What chesticles!) 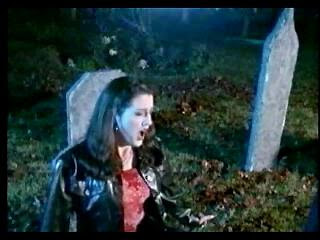 Here at a wasted life, we generally admire people who have a dream and try to follow it in hope of achieving their own real-life Horatio Alger story or simply because they, like a true outsider artist, have an unquenchable need for artistic production. Beaton definitely falls more into the former than the latter, and possibly as a result the movie, an obvious attempt to sustain or advance her dream vocation (i.e., an extremely paltry cinematic career), displays little true creative talent or any sort of artistic goal. Thus, while she is to be lauded for at least trying to attempt something, she did anything but make even a half-way decent purse from a sow's ear. But then, she also didn't make a worthwhile mess, either. The real problem, to return to what we wrote about Frozen Scream (see the second paragraph above), is that unlike Renee Harmon's first foray into creating a non-existent career, as cringingly horrible as The Bagman is, it isn't as entertaining as a cringingly horrible film should be. 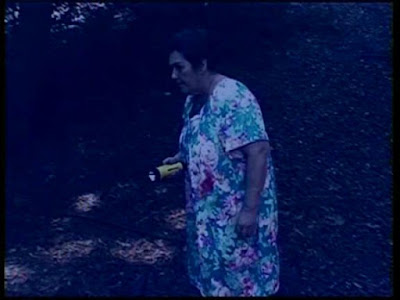 For us, it will remain in our memory as the film that put us asleep (something even Scent of a Woman [1992 / trailer] didn't do, but then we walked out on that one). That is not a memory that instigates a positive recommendation... 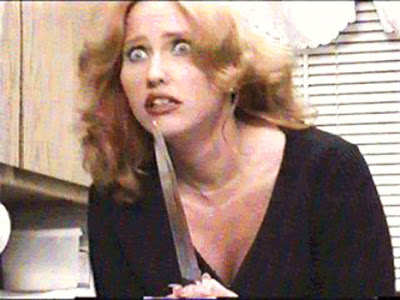 So, in other words: don't bother watching this mess… Hell, why even waste your time with the trailer (below)?
Interminably overlong trailer to The Bagman:
Posted by Abraham at 5:38:00 PM