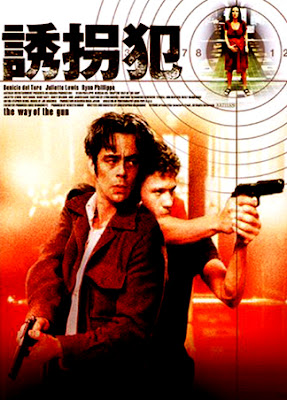 Supposedly a cult movie, which leaves us here at a wasted life wondering why. True, The Way of the Gun has more forced quirkiness and idiosyncratic characters and excessive violence and guns and secret agendas than the average pubescent has zits, but in the end the movie is only slightly more interesting and definitely a bigger mess than an exploding whitehead. (Which, actually, can on occasion be rather interesting, according to some people.)
The directorial debut of Christopher McQuarrie, whose career at the time had already somewhat stagnated despite his co-writing credit on the highly successful The Usual Suspects (1995 / trailer), The Way of the Gun, notwithstanding being a bit of a box-office bomb, must have been seen by the right people, for Brian "I didn't do it" Singer's favorite co-scribe now scribes for and directs no one less than that never-aging Hollywood institution who never slept with Chad Slater a.k.a. KyleBradford (below), Scientologist sunny boy Tom Cruise. 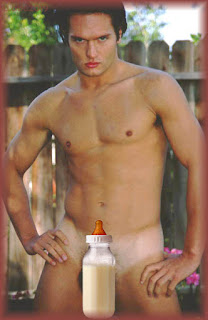 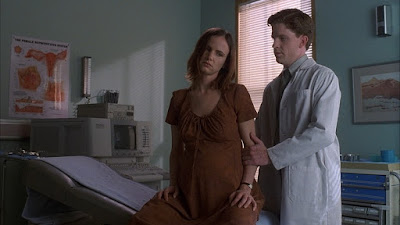 Christopher McQuarrie has gone on record that the final script for Way of the Gun is actually a watered-down version from his original idea, which evolved from the concept of a script featuring an unsympathetic leading man that no "cowardly [Hollywood] executive" would accept. An idea (possibly conscious, possibly subconscious) that actually raised its hand ever so slightly four years prior to Way of the Gun in the far more successful horror movie, From Dusk till Dawn (1996 / trailer).* But unluckily, while Juliette Lewis, who appears in both Dawn and Gun, is equally effective in both movies, neither Ryan Phillippe nor Benicio Del Toro (in Gun) has the charisma of George Clooney (in Dawn). As a result, though their characters might be just as psycho as Clooney's Seth Gecko — anyone remember how nonchalantly he torches the gas station attendant? — they really do remain unsympathetic assholes. Likability, or identification with the characters, is a problem that is hard to overcome in non-horror* anti-hero films that focus too much on all that which makes the heroes anti (see, for example, Álex de la Iglesia's Dance with the Devil [1997 / trailer]): one really doesn't give a flying fuck about what happens to the two leads, and only waits for their invertible death. (In the case of The Way of the Gun, the ending is nevertheless open enough that, had the movie been a hit, a sequel could have been an option.) 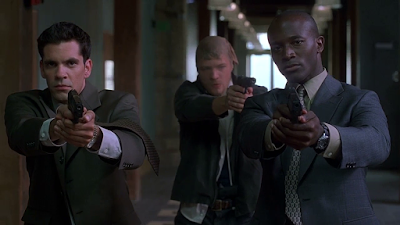 * Horror films, particularly body counters of the kind featuring anti-heroes of the likes of Freddy & Jason, are a completely different kettle of fish: as the whole point of the movies is the kills, one seldom dwells upon or cares about the unstoppable killer, thus even a child molester (like Freddy) can become an identification figure for the audience. 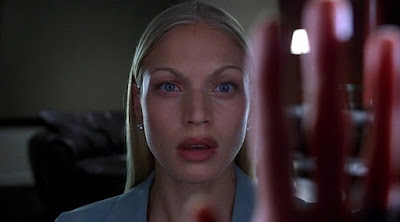 Way of the Gun is very much a western in contemporary clothes, a kind of buddy movie ala Butch Cassidy and Sundance Kid (1969 / trailer) but with dickhead buddies. The link to the earlier buddy western is most obvious twice in the movie: first by the last names of the two lead asswipes, Parker (Ryan Phillippe, of Franklyn [2008]) and Longbaugh (Benicio Del Toro, of Sin City [2005 / trailer]), which are the real family names of Butch and Sundance, and second by the final shootout, which uses the same location as the final shootout in the earlier Redford & Newman western. 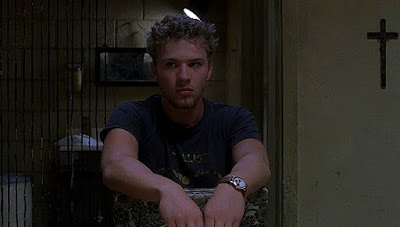 "Can I ask you something? Are you a faggot? See, you asked me if I was heterosexual; I asked you the same question, only I was clear about the answer I was looking for."
Parker (Ryan Phillippe) 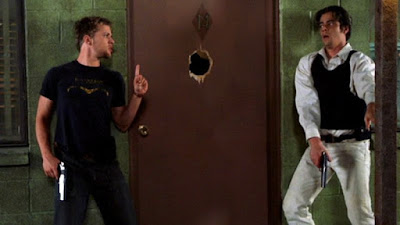 Interestingly enough, for all their obvious homophobia, Parker and Longbaugh of Gun come across like they would secretly like to lick each other's lollipop and cross pack fudge far more than most duets found in buddy films; it has something to do with the way, like old couples, they need not talk when they communicate, and how Longbaugh seems so jealous when Parker plays cards with the pregnant Robin (Juliette Lewis of Kalifornia [1993 / trailer], Romeo Is Bleeding [1993 / trailer], Metropia [2009 / trailer] and The 4th Floor [1999]). But, no, like so many closet cases — anyone remember Dennis Hastert? Ed Schrock? David Dreier? Larry Craig? — they would rather hate what they are than admit to what they crave…

Ode to Larry Craig:
But then, they hate more than just men-loving men: they hate everything and everyone, so let's skip the armchair psychology of the "why" behind them being shitheads and just accept that they are — as is amply displayed in the opening scene, in which the male anti-couple more or less start the fight, or the later scene at the sperm bank where they overhear all the info that leads to their decision to kidnap Robin, the surrogate mother for the child of gangster Hale Chidduck (Scott Wilson [29 Mar 1942 – 6 Oct 2018] of In Cold Blood [1967 / trailer]) and his trophy wife Francesca Chidduck (Kristin Lehman of Hemoglobin [1997 / trailer]), for a hefty ransom and a life ever after on easy street. The kidnapping, however, is definitely not a "brains kind of operation", as per Longbaugh, and just as they go south physically while on the run, everything goes south literally. 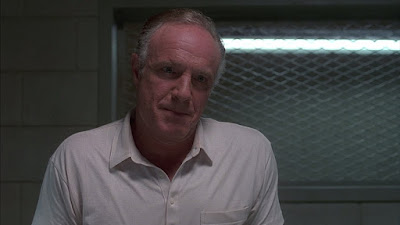 Way of the Gun is, as one might surmise by the title, a violent film. But oddly enough, for a violent film it has a lot of long sequences in which nothing really happens: people talk a lot, quirky personality traits are shown, and agendas and secrets and relationships get revealed — sometimes at an interminably snail-like pace — and then, BOOM! The bullets start flying again and the bodies dropping. Not that one really cares which bodies drop. 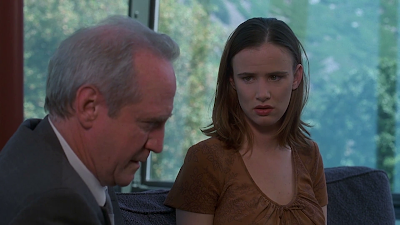 In general, the acting cannot really be faulted, as everyone manages to successfully reflect the one-side of their one-sided characters. Phillippe, for whatever reason, sports a truly ridiculous accent of the kind found in bad James Cagney movies, but everyone else in the film at least sounds like their accents are real. Juliette Lewis is great as the pregnant Robin, more than capable of convincing emoting and characterization, while her real-life father (Geoffrey Lewis [31 Jul 1935 – 7 Apr 2015] of Night of the Comet [1984], Lust in the Dust [1985], Moon of the Wolf [1972] and so much more) is an interesting and wryly funny loser of a tertiary character named Abner Mercer. James Caan, as the bagman Joe Sarno* — like everyone in the movie a man with a secret and personal stake in the kidnapping — steals the screen whenever he has to talk, but he loses some of his aura of believability during the final shootout, in which he comes across as a bit too old, out of shape, and (physically) slow. But then, the big final shootout is pretty much a washout anyway. 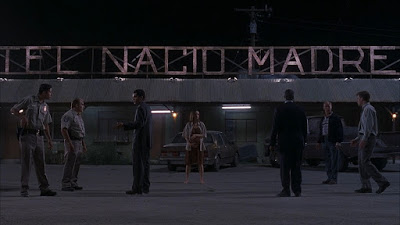 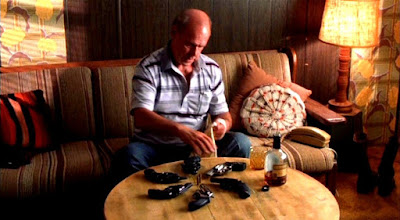 Midway in the movie, after Parker and Longbaugh kidnap Robin and the resulting gunfight ends up with the bodyguards Jeffers (Taye Diggs, of House on Haunted Hill [1999 / trailer] and Dylan Dog: Dead of Night [2010 / trailer]) and Obecks (Nicky Katt of Planet Terror [2007] and Riding the Bullet [2004]) in jail, Sarno shows up for the first time and, amidst all his patently well-written dialogue, gives Obecks a veiled warning by saying, "The only thing you can guess about a broken down old man is that he is a survivor." At the final shootout, Sarno arrives at the stereotypical Mexican bordello with a gaggle of "broken down old men", one and all fellow bagmen and, going by their ages, survivors. Over the course of the subsequent oddly anti-climactic climactic scene, however, one begins to wonder how any of them ever survived long enough to die at the poorly choreographed and lensed shootout. For being the climax of the movie, it drags and is neither visceral nor tense or involving, and surprises only in an idea involving old bottles... for that, however, the shootout still remains as sloppy and unsuccessfully over the top as to be expected from a final set piece of a bludgeoning movie as consciously hip and irritating and uneven as Way of the Gun. 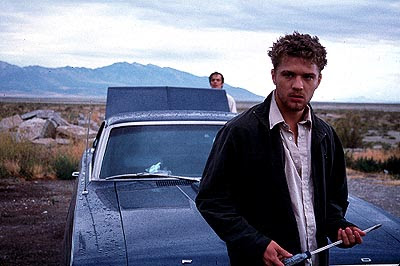 In any event, though we do find Phillippe far cuter than Chad Slater a.k.a. Kyle Bradford, we were not amused. You probably won't be either.
Posted by Abraham at 7:14:00 AM

Disagree with your review.Yes,characters are for the most part unsympathetic.But i thought it was a terrific thriller.

Would be interesting to know "why" you thought it terrific. The narrative? The way it's made? Because the leads are hot and macho?