Let's hear it for Tom & Jerry! 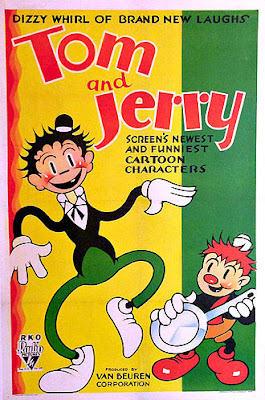 Obviously enough, we're not talking about everyone's favorite cat & mouse couple, the S&M friendenemies created by William Hanna and Joseph Barbera that entered the public consciousness in 1940 with the theatrical one-reel cartoon Puss Gets the Boot (full short) and has since become a permanent part of pop culture over the course of 161 animated shorts and diverse comic books, TV shows, direct-to-video or DVD releases and feature films. (They are due for yet another commercial revival in 2021 with the release of their new, feature-length live-action and cartoon mix film [trailer].) The Tom and Jerry we have in mind you have probably never heard of: we're talking about the long-forgotten cartoon bromancers Tom and Jerry, who were around almost a decade before the cat "Jasper" and the mouse "Jinx" (seen below from their debut short) stole their names. 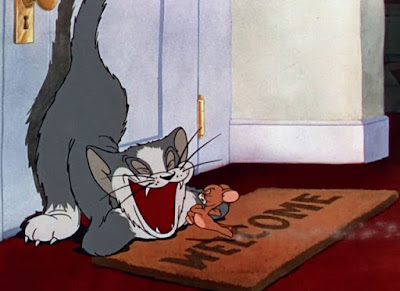 Between 1931 and 1933, the Van Beuren Studies released some 26 or 27 cartoon shorts of the vertically mismatched man couple — one (Tom) is tall, the other (Jerry) short — but the duo never achieved the popularity of such contemporaries as Mickey Mouse or Betty Boop and was eventually cancelled, some three years before the studio itself closed its doors for good. (The firm's namesake and owner, Amedee J. Van Beuren [10 July 1879 – 12 Nov 1938], died soon afterwards.) In the later 40s, after the Van Beuren film library was purchased by Leslie Winik's Official Films*, Tom and Jerry were renamed Dick and Larry so as to not be confused with the more-successful cat and mouse that stole their names. By now, November 2020, the entire Tom & Jerry / Dick & Larry library has long entered the public domain, so the shorts that still exist can generally to be found somewhere online.
* At the time, Official also purchased diverse Flip the Frog shorts, possibly including the one we present as our Short Film of the Month for February 2020, Room Runners (1932). The difference in the artistic level of the animation between Flip and Tom and Jerry is notable and noticeable, although Tom and Jerry are arguable a bit more surreal. 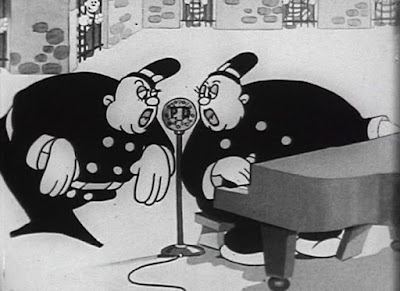 Cartoon Research points out that Tom & Jerry were originally a "Mutt and Jeff-like cat and dog pair" created by John Foster (27 Nov 1886 – 16 Feb 1959) and named Waffles and Don (see: The Haunted Ship [full short], released 4/27/1930, directed by Foster and Mannie Davis [23 Oct 1894 – Oct 1975]). After the artists George Stallings (9 Sept 1891 – 9 April 1963) and George Rufle (15 Feb 1901 – July 1974) joined the studios, they convinced Foster and Van Beuren Studios to change the duo into humans.
The first short to feature the two as humans is Wot a Night (1931 / full short), which we almost presented as a Short Film of the Month but decided not to because of an extended scene that just doesn't sit right anymore. (The title card below, to the Tom & Jerry concept that ended up being their Amos & Andy persiflage, 1932's Plane Dumb [full short], "arguably one of the most racist cartoons ever released", indicates what doesn't sit right in Wot a Night. In fact, the bit we dislike in Wot a Night is even revisited in Plane Dumb.) In Wot a Night, the duo are cab drivers, but their professions, when relevant, changes film to film — in this month's short film, for example, they are cops.

In any event, Magic Mummy is also the first Tom & Jerry cartoon we ever stumbled upon, which is another reason we chose it as the one to present as our Short Film of the Month this month.
In their article on Tom and Jerry, Cartoon Research also points out what makes the duo's cartoons, as primitive as they might be today, so appealing: "As the series progressed […] the films became increasingly bawdy, boozy and bizarre. Van Beuren was second only to Fleischer in depicting surreal, impossible feats on screen; Tom, Jerry, and their surroundings did it all. Inanimate objects came to life; two singers could share a single mouth. Old houses hid evil dancing skeletons; seas concealed fish rabbis dressed in spy-drag black. In Piano Tooners (1932 / full short]), Jerry flushes a humanized 'sour note' down the toilet. In A Swiss Trick (1931 / full short]), eating too much Swiss cheese causes our heroes to grow holes in their bodies." Other titles worth checking out include Pots and Pans (1932 / full short), Jolly Fish (1932 / full short), Tuba Tooter (1932 / full short) and Pencil Mania (1932 / full short). For a list and plot description of diverse Tom & Jerry cartoons, we suggest going to Dr Grob's Animation Review. 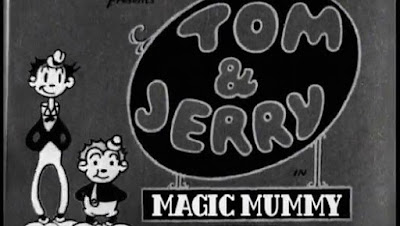 In 1933, Van Beuren, who seems to have been a bit of a hard-nosed dickhead of a businessman, "fired Foster and promoted Stallings to his position. Under Stallings, the Tom and Jerry series seemed to lose much of its earlier charm." Magic Mummy, originally released on 3 February 1933, is the last Tom & Jerry cartoon in which John Foster was involved. Enjoy.
Tom & Jerry in
Magic Mummy (USA, 1933):
Addendum: As indicated by the advertisement below, Cartoon Research made an interesting discovery: "Before the cat and mouse, before the humans and even before the cat and dog there seem to have been a man and a mule! While we know very, very little about these silent shorts from Arrow Films, the ad suggests that the heroes were animated puppets. It also suggests that a full series was released […]." Go here @ Cartoon Research for more info on that lost team.