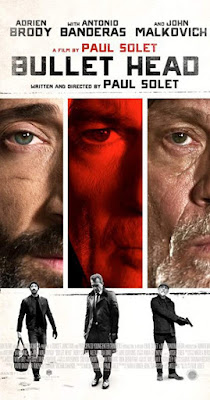 Long ago, in the day of the grindhouse, Bullet Head would probably have been one of those surprising little flicks that stand out amidst all the trash of the triple-feature of often unknown titles. (Yes, flicks with "name" actors were screened in skid-row theaters.) We caught the flick on Netfux, that contemporary interim storage facility for so many flicks that nobody has heard of — the grindhouse of today, but with less breast and blood and pushing of social norms. And as a feature-length film, Bullet Head is far more realistically reminiscent of, and true to, the low-budget genre flicks of yesteryear's flophouse theaters than, say, postmodern "grindhouse" fun ala Hobo with a Shotgun (2011) or Machete (2010 / trailer) or Planet Terror (2007), which are to a greater extent amusing, multi-violent persiflages than the real thing. But unlike, say, Tarantino's Death Proof (2007 / trailer), which very much copied the verbosity common to true grindhouse, for all the talking done in Bullet Head, the movie is never boring. It might be nothing new, but it is immensely watchable — like the best of the "real" product of yesterday's grindhouses.

Bullet Head is a low budget thriller with such a thin, run-of-a-mill plot that the movie should suck, but smart casting choices — namely, actors who can act well even in their sleep (and in obvious rent-paying jobs like this one) — decent direction, and an intelligently padded story make for a pleasantly quick-playing B-flick that isn't just fluff or action or stupidity or blood. The movie definitely won't win any awards, not even in Bulgaria, where it was shot, but it is nevertheless a watchable example of how sometimes an end product can be surprisingly better than it rightly should be… in this case, so much better that we here at a wasted life have added other flicks by director Paul Solet — for example, Grace (2009 / trailer), which he also wrote, and Dark Summer (2015 / trailer) — on our "Maybe Watch" list.

The core non-plot of Bullet Head sees three robbers on the run from a botched heist taking refuge in a (How creative!) deserted warehouse, a hiding place chosen by chance when the fourth robber, the escape car driver, dies bullet-riddled at the steering wheel. Of course, the building isn't as deserted as thought, but instead of ghosts (see Boo! [2005] or Death Tunnel [2005] for deserted buildings with ghosts) or zombies (see The Dead Hate the Living [2000]) or ghostly black magic (Dead Birds  [2004]), or even an unknown and seemingly unstoppable psycho (Botched [2007]), the three protagonists have to face off with a killer dog named not Cujo [1983 / trailer], but De Niro.* In between, everyone also talks a lot — a damn lot.

* Never once does the name "Bullet Head" appear anywhere in the movie, though one could well assume the title is a reference to the dog's name. But it isn't: one learns along the way, in a rather effective scene, that the dog's name is De Niro. We assume that the final title was chosen after the fact, when it was realized that a movie named "De Niro" might run into some legal issues…

The plot is one that fits on a napkin, basically, and is barely enough for an hour-long TV episode (with commercials). Screenwriter Solet stretches the narrative to a feature-film length by giving all four of the universally loquacious main characters — Stacey (Adrien Brody), junkie Gage (Rory Culkin), Walker (John Malikovich), and bad guy Blue (Antonio Banderas) — a flashback scene or two to tell a tale that fleshes them out as characters. The dog and its character, and most of the events that lead up to its blood thirst, penchant for violence, and absolute hate for humans, are shown less in flashback than in narrative times jumps, which also add a mildly intriguing structure to the main storyline. 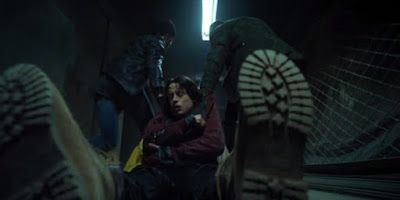 The human flashbacks, on the other hand, are entertaining filler of varying believability and force, but in the case of junkie Gage, the running-time-padding flashback manages to make the viewer understand and feel compassion, or at least pity, for a junkie loser — a stock character that is seldom if ever explained with empathy. Stacey's flashback is the most funny, almost like a contemporary O. Henry story, whereas Walker's tale doesn't hold much water (freshwater fish simply die too quickly in saltwater for the tale to have transpired as it does). 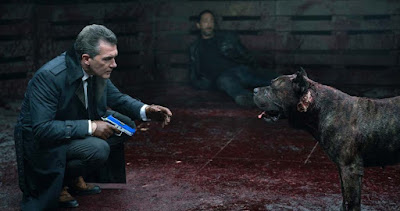 A good example of having your cake and eating it too, Bullet Head wallows in (mostly off-screen) dog-fighting and canine cruelty while taking a definite anti-dog fighting stance. But then, the movie, despite being a bullet- and body-filled one about a killer dog, seems very much a movie by dog lovers and for dog lovers (unlike, say, Rottweiler [2004]). Thus, it is not all that surprising that in the end love conquers the dog… at least for one character, who has a happy end.

But then again, maybe not: we here at a wasted life would argue that the final feel-good scene of the flick is less a "real" happy end than a final fantasy of someone dying. (What say you?)