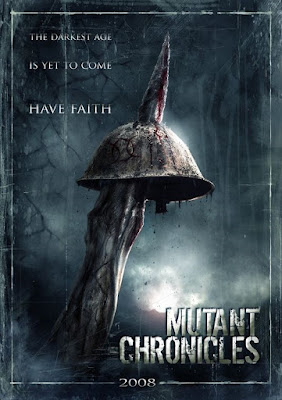 (Spoilers.) When we uncovered the unopened, plastic-wrapped, German/English-language DVD — "Exxklusive Sonderedition mit Dog Tag" [Exclusive Special Edition with Dog Tag] — to this assumedly obscure movie at the bottom of a pile of 50¢ DVDs at a thrift store on Mallorca, the title, headlining cast, and overall trashy look sang a Circe song that demanded we buy it. A quarter-of-a-year later we finally watched it, and what can we say: one should never trust Circe. And we should have left the DVD where we found it.

That the movie ever got a cinema release is almost unbelievable; what is not is that its cumulative gross in the USA was only $6820 — and that at a supposed budget of $25 million. OK, worldwide it may have finagled a bit more than 2 million, but that too is hardly a good return on the initial investment. (A career-killing flop, one might think, but director Simon Hunter, whose only prior feature-film directorial credit was the horror film Lighthouse [1999 / trailer], not only came back with a feel-good drama entitled Edie in 2017 (trailer), but seems to be currently working on a comic book-based vampire & zombie flick entitled Last Blood.)

In regards to where the 25 million was spent, the final product leaves one wondering. The cast surely could not have cost all that much, not even the noticeably slumming and disinterested John Malkovich, who shows up to ask for a paycheck. The special effects, maybe, though definitely not the CGI blood, which looks very much, well, like poorly rendered CGI blood. One can't help but wonder what good the 25 million could've done had it been used sensibly, like as a donation for worthy causes. 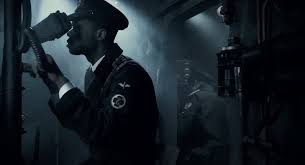 Visually, Mutant Chronicles is reminiscent of so many other green-screen-based movies ranging from Sky Captain and the World of Tomorrow (2004 / trailer) to Sin City (2005 / trailer), or The Spirit (2008 / trailer) to Sucker Punch (2011 / trailer), all of which are far more entertaining and interesting. It's aesthetics, in turn, are very much of the steampunk cum dieselpunk style found in Sky Captain, Sucker Punch, or even Dark City (1998 / trailer). So, though set in the 28th century, after the near incomprehensible introductory explanation ala David Lynch's Dune (1984 / trailer), which almost incomprehensibly sets up all the background information needed for the movie to start where it does, the story begins amidst the trenches of a WWI-style war waging against two of the four business conglomerations that now rule the Earth, in a world that is capable of building airships that can fly to Mars but coal is still used to power the said ships. 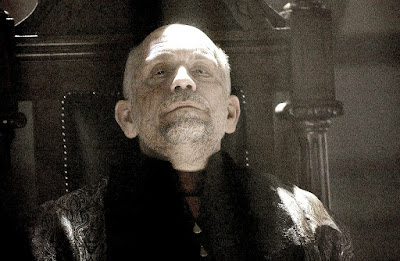 And it is during this war somewhere on the European continent that the excessive shelling breaks open some long-buried spaceship from a long-forgotten war back when men still used swords. The war between the conglomerates goes to hell when the mutants start pouring out, killing and converting human beings faster than the average zombie-bite victim becomes one of the undead. Among the many who fall, Capt. Nathan Rooker (Sean Pertwee of Dog Soldiers [2002 / trailer] and Botched [2007 / trailer]), whose heroics allow Maj. 'Mitch' Hunter (Thomas Jane of Nemesis [1992 / trailer] and Pawn Shop Chronicles [2003 / trailer]) to escape with his prisoner, Lt. Maximillian von Steiner (Benno Fürmann of Anatomie [2000 / German trailer] and Pornorama [2007 / German trailer]). And though the conglomerations join forces to fight the common enemy, all seems lost… 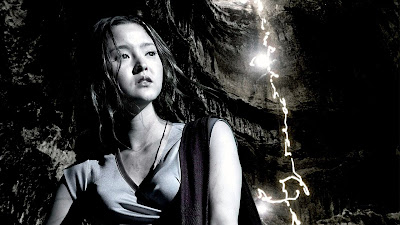 And this is where Mutant Chronicles goes all Dirty Dozen (1967 / trailer), The Wild Bunch (1969 / trailer), Nam's Angels aka The Losers (1970 / trailer) or any other film of the kind in which a disparate group is brought together for a suicide mission. Inspired by the prophesies in an ancient, holy tome, the titular "Mutant Chronicles", Brother Samuel (Ron Perlman of Sleepwalkers [1992 / trailer] and much more), the current head of the religious order that long ago vanquished the mutants, gathers a disparate group for a suicide mission. Needless to say, both Mitch and Maximillian are there, as are an odd assortment of other male and female characters whose characterization, for the most part, is established alone by sex and ethnicity or one or two lines of dialogue. (In other words: characterization is null.) The lack of memorable characterization is a flaw, of course, for as they die one-by-one over the course of the mission, no death proves to have a punch or seem to matter for no identification is ever established. (Interestingly enough, and perhaps as to be expected, the only two black characters of the movie that speak, Capt. John McGuire [Steve Toussaint] and Captain Michaels [Pras Michel], are among the earliest to die.) 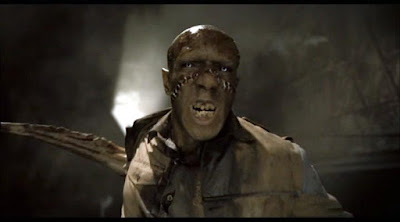 Not that the lack of characterization is the biggest flaw of the movie; Mutant Chronicles is, after all, neither a woman's film nor prestige project, it is an action movie based on a role-playing game created in 1993. No, the biggest flaw of the movie, aside from its general murkiness, occasionally confused editing and excessive use of close-ups, is that it totally lacks tension and is simply never exciting. That is primarily due to the by-the-numbers, predictable script supplied by Philip Eisner (Event Horizon [1997 / trailer]), which is as full of holes as it is of lame dialogue, fails miserably at getting the viewer emotionally involved in either the action or the characters, and is all about an idiotic mission that would only be seen logical in a third-rate comic book. 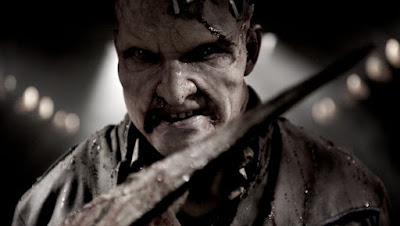 And what is the mission? The group should make their way to the heart of the mutant machine to reinstall a device that may or may not be a bomb and to which the lost key has to be found somewhere along the way, but only god knows where. And which also has to be installed by "the chosen one", though who that might be no one truly knows either. Brother Samuel hopes/assumes he is the one, but the viewer quickly realizes that the savior must be Thomas Jane's Mitch, for despite his hard, fuck-the-world attitude, he does one too many good deed along the way not to be Good Guy Numero Uno. 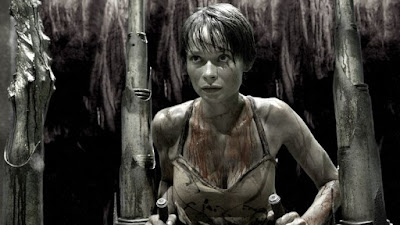 When not dampened by too many close-ups or rendered almost incomprehensible by crappy editing, Mutant Chronicles occasionally proves to be a visual treat in the excessive way so many digital backdrop movies — see Sky Captain and the World of Tomorrow, Casshern (2004 / Japanese trailer), and Immortel (Ad Vitam) (2004 / trailer) — tend to be. But the flashes of eye candy are not enough to save the movie, the script of which definitely needed a lot more polish and a few less characters. 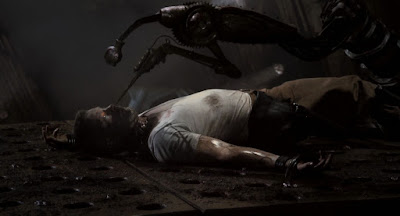 One script mistake that sent us into fits of laughter was that of the reappearance of Sean Pertwee's Capt. Rooker — days, weeks months after he falls in the field — being dragged through underground tunnels to the mutant-making machine that lies below the field where he originally fell. This gives Rooker and Mitch time for commiseration in what should be a touching and/or shocking scene, but the inanity of the distance and timing is too hilarious to overlook: the mutants dragging him to his fate obviously really got lost along the way. 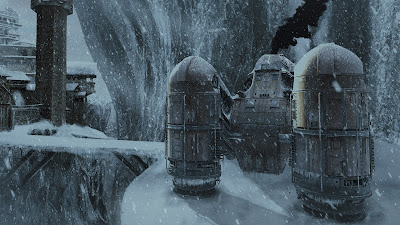 (Major spoiler — don't read if you plan to watch the movie.) About the only thing that is truly good in the movie is the last scene, a scene that tips the entire movie into pure, cynical irony. The last shot of the mutant structure hurtling through space reveals that the whole mission was basically pointless and a farce, for by actually fulfilling the mission, the Dirty Less-than-a-Dozen may have saved the planet but not the remaining human race, for all those evacuated to Mars — including the wife and daughter of Capt. Rooker, whose safety was so important to Mitch — are revealed to be doomed in the final seconds of  Mutant Chronicles.