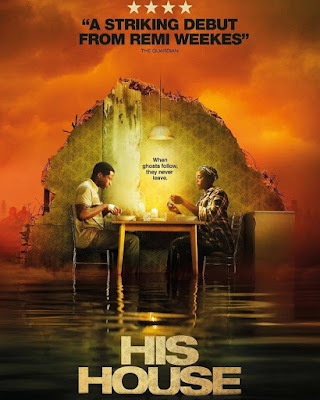 "Your ghosts follow you. They never leave. They live with you. It's when I let them in, I could start to face myself."
Bol (Sope Dirisu) 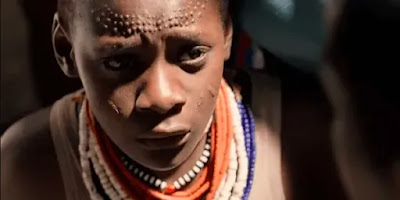 In February of 2020, after seven years of civil war and unrest that has included outbreaks of genocide, South Sudan — which "as of 2019, […] ranks third-lowest in the latest UN World Happiness Report, second-lowest on the Global Peace Index, and has the third-highest score on the American Fund for Peace's Fragile States Index" — achieved an internal peace deal. But all that, obviously enough, came too late for the more than 1.5 million South Sudanese that have since fled the country as refugees, most in fear of their lives.
Trailer to
His House:
The two South Sudanese protagonists of His House are part of this diaspora: they want only to survive and start a new, better life away from the man-made horror and certain death of their homeland. And one day at the asylum center in Brexitland, it looks like Bol (Sope Dirisu, also seen somewhere in The Huntsman: Winter's War [2016 / trailer]) and Rial (Wunmi Mosaku of I Am Slave [2010 / trailer] and Citadel [2012 / trailer]), who have survived diverse non-supernatural horrors like the sinking of their overcrowded boat and the loss of the young girl Nyagak (Malaika Wakoli-Abigaba), might be among the lucky ones who are given the chance to start anew amidst the safety of a stable country. They are removed from the refugee center with typical administrative coldness and placed amidst the general population: given an abnormally oversized, trash-strewn wreck of a suburban row house and a weekly sum of 74 pounds, they are now official asylum seekers and await final confirmation that, yes, they are good enough people to remain in Brexitland. 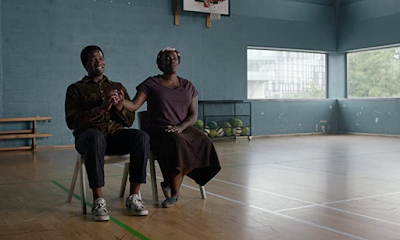 But what looks like a new start turns out to be as bad as the horrors that they just escaped: that which should be their house of hope quickly proves to be a house from hell. The secular horrors that have escapes are now replaced by supernatural ones, and as outsiders that dare not stand out in any way that could endanger their status, they have nowhere to turn for help. It's not like anyone in suburban Brexitland is likely to believe two not-yet-fully-approved African refugees telling, in "broken" African English, of a demon inhabiting the walls of their new abode, a demon that has followed them all the way from Africa — and thus the two strangers in a strange land are faced with the conundrum of remaining in a house of horror and danger and possible death, or making waves and surely being sent back to a war-torn homeland and probable death.

The feature-film directorial debut of Remi Weekes, who also wrote the screenplay, His House is perhaps one of the most interesting if not best horror films to come out in a long time, and that despite the (for a change both effective and affective) use of one of the great no-noes of filmic narration, the flashback within flashback. 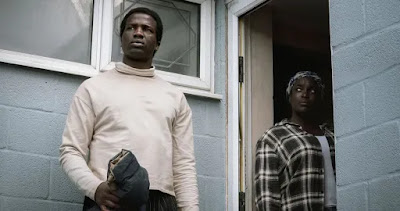 An enthralling tale of psychological and physical fright, the movie combines the worldly terrors that drive people to desperately flee their homelands with supernatural terror of evil entities in a house of horror. The two main characters, two "good people" without any solid footing in their new country, are caught in a trap apparently without a solution — after all, what is worse: being sent back to certain death in the war-torn nation you lost everything to escape, or falling victim to an evil entity that wants your body? 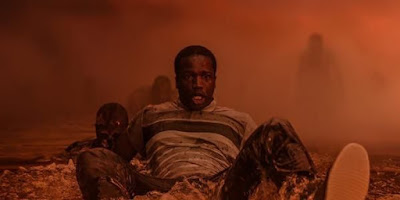 Currently found on Netfux, His House manages to be both different and traditional at the same time. No dead-teenagers here or zombie hoards at the door, but the house is haunted; and as the demon grows fiercer, the distant neighbors, unfriendly local kids, and overworked civil servants are hardly a source of safety or retreat or helpfulness. All that, combined with well-drawn characters for whom you come to care, results in a moving and absorbing tale of ever-increasing unease and terror that keeps you riveted until its less-than-expected ending. 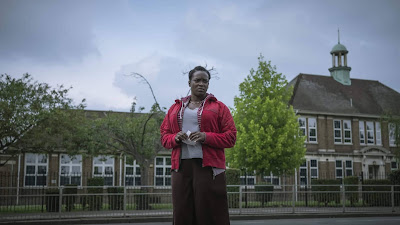 The horrors veer from the solidly earthly of genocide to the subtle reflection of how the back walkways of British suburbia can be as discombobulating as the maze at the Overlook (see: The Shining [1980 / trailer]) to the unnerving frights caused by bumps inside the wall (or worse: the things that come out of the wall) to the slow rot that suspicion and emotional exhaustion can engender upon the psyche, the soul, and the personal relationship. As outsiders in every way, Bol and Rial have nowhere and no one to turn to as the spiral of terror increases — and, indeed, for a time it is arguable whether the evil that has come to haunt them is truly supernatural or merely the physical reverberations of two psyches mangled by the past horrors experienced during a shared desperate journey. 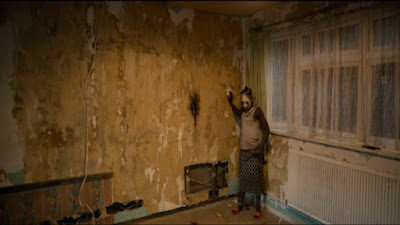 His House: a movie worth watching... one can only hope that it doesn't eventually simply disappear, like so many movies, into the bottomless bowels of Netfux.
Posted by Abraham at 1:03:00 PM