A.k.a. Bestien der Samurei, Die Nackten und die Bestien, The Naked Seven, The Sengoku Rock: Female Warriors, and many more titles. The German DVD we watched was entitled Bestien der Samurai, but at one point or another it was released in the land of sausage and beer as Die Satansweiber aus Fernost ("She-Devils of the Far East"), a title notable only for the attempt to link the Japanese flick by title to Russ Meyer's classic roughie, Faster, Pussycat, Kill! Kill! (1966 / trailer, starring Haji and Tura Satana), which in Germany was given the title Die Satansweiber von Tittenfield ("She-Devils from Titsfield"). 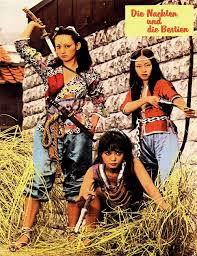 There is little that the two films have in common; indeed, if director Yasuharu Hasebe's film calls any American exploiters to mind when watched, it would probably be HG Lewis's She Devils on Wheels (1968 / trailer) or, closer to the horse bone, Al Adamson's The Female Bunch (1969 / trailer) — although, when it comes to sheer boobage, as in the amount of naked breast (and to a lesser extent, naked flesh in general) seen over the course of this Japanese soft-core costume sex film, neither Meyer's film nor Lewis's nor Adamson's can hold a candle in comparison. Sengoku rokku: hayate no onna-tachi is a literal breast celebration: a movie whose limited non-plot (in the cut we watched) is nothing more than excuse to show pert, shapely, Asian B and C cups with hard nipples. 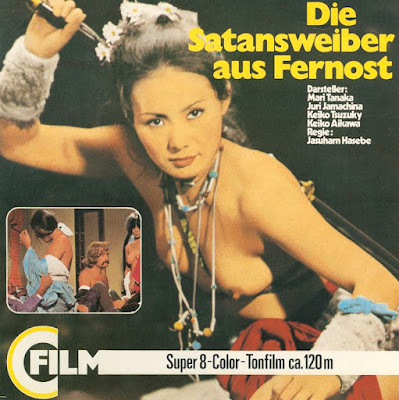 According to online sources, the original version of the movie is 120 minutes long; the cut we saw was a mere 75 mins, which means a lot was cut. (Some cut scenes.) As far as we can tell, the whole plot aspect mentioned elsewhere about how our group of seven women coming to the assistance of a village* got jettisoned, for the film we watched began with the seven gals watching and then goading the last two survivors of a battle, each from the opposing side, to battle to the death. And while our DVD claims they want to enter the bordello business and thus must cross swords with a samurai out to stop them, in the film itself they enter a bordello to have fun and because their leader, Eno (Mari Tanaka), is in love with the self-obsessed guy who runs it, Taro Tenma (Kenji Kaji), a dude with a hilarious haircut and enough testosterone to share. Out of love, she gets her gals to steal a shipment of guns, which results in the local overlord setting out to raping and killing the often naked seven; those his men fail to kill end up on the wrong side of Taro and his men when, hearing that Taro has decided to NOT start a revolt but to sell the guns back to the local overlord instead, they steal the guns back again. 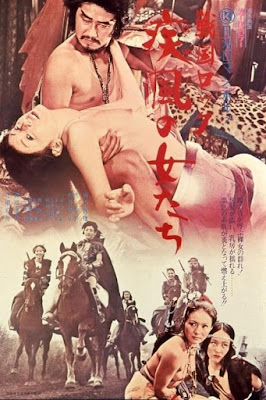 * An obvious and intended take off of the plot of The Seven Samurai (1954 / trailer), hence the title The Naked Seven. The Seven Samurai, of course and as you well should know, got remade in the US as the classic oater, The Magnificent Seven (1960 / trailer). Needless to say, this film displays a bent that in no way corresponds to the #MeToo or #NoMeansNo attitudes of today – but then, it is a Japanese "pink film". Women say no, get fucked anyways, and because the men are such studs, the women moan and groan in pleasure even as they grimace in pain or distaste or hate. The movie might present itself as a flick about ass-kicking babes who take no shit, and indeed on occasion the gals are that, but above all it is a notably misogynistic flick about gals who get naked a lot and have a lot of sex and do a lot of stupid stuff and get abused by men and really aren't half as ass-kicking as they should be. Of the seven, only three – or was it four? who cares? – ride off into the sunset alive and with their clothes on.

Our screening of the flick was with a mixed-gender group, which was probably a mistake as there are a variety of scenes and attitudes that make it uncomfortable to watch is a situation in which locker room talk is not an option. But it is doubtful that locker room talk would have really made the movie all that much better; it is, in the end, one of those kind of flicks that has you go WTF or laugh a lot, but also makes you feel a little bit dirty. Not because of the sex, but because the narrative and events have an in-explicitly and oddly anti-woman feel that no amount of bad dubbing, laughable death scenes, bad fight scenes, hilarious blood effects and inane plot developments can sugarcoat. 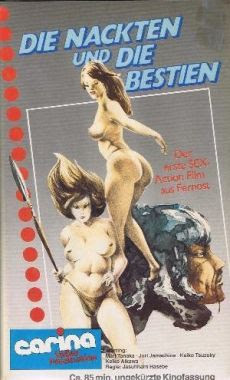 For us, one of the most memorable moments – aside from the scene in which one of the women, Nene (Yuri Yamashina), is raped front & back at the same time to get her to talk ("Talk you cock-sucking whore!") – is the weird crosscut between five others having debauched fun as one performs some sort of very traditional dance and song with a nun, resulting an extremely juxtaposition of low and high culture. Also, we must say the groovy easy-listening aspects of soundtrack, much of which sounds as if it were lifted from a vintage Jess Franco film, is absolutely fabulous. Is the cut version of Sengoku rokku: hayate no onna-tachi good? No. Is it interesting? Yes. But it helps to have a high threshold for misogyny, and to view the movie not as a serious film or artistic statement, but as a violent, breast-centric parody of samurai films. One can only wonder what the full 120-minute version is like…
Posted by Abraham at 5:52:00 PM