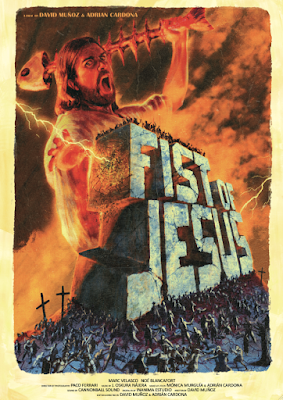 When bored, we are likely to search the web using unlikely word combinations such as "Jesus with a boner" or "Zombie Mohammed" (or the inverse) just to see what we discover. While our Mohammed searches generally tend to remain very dry — after all, who wants to get killed for making jokes about a religion that is love personified? — the Jesus results are often rather entertaining, or even informative. 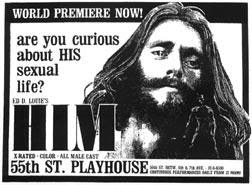 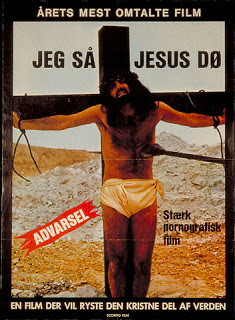 And it was another such search that brought us to find our Short Film of the Month for April 2016, Fist of Jesus. This roughly 15-minute-long Spanish gore film from Adrián Cardona and David Muñoz has reaped in the awards (76 according to the film's website), but for that it seems oddly unknown for a flick with such a great concept, so much gore, and so many giggles. The basic plot involves Jesus' (Marc Velasco) resurrection of Lazarus (Roger Sotera) going all wrong, and how he and his pal Judas (Noé Blancafort) have to set things right. As the website El Gore aptly says, what we have here is an "ultra-violent Peter Jackson (the Braindead [1992 / trailer] / Bad Taste [1987 / trailer] / Meet the Feebles [1989 / trailer] era) reboot version of Monty Python's Life of Brian (1979 / trailer)".
The supposed goal of the filmmakers is to eventually make a feature-length version of the tale, but at the moment they seem content simply rolling out anything they can think of along the product chain (e.g., trading cards, game, t-shirts, etc.).
Fist of Jesus:
In any event, as Horror News puts it: "It's Jesus like you've never seen him before in a short film that's sure to piss off a few churchgoers, but hey………… it's great fun and impressive work, none-the-less!" And something that would surely have cost the two filmmakers their lives had they used a different prophet as their main character.
As an extra:
Jesus Will Survive — Jesus Christ! The Musical:

To Jeanette: The weirdest? Dunno, really, as weird is relevant. Long ago I stumbled on a website mediating Russian amputees looking for western husbands; the women were all normal and clothed, but the photos did focus on their missing limbs, which I sort of found weird as amputee is not my kink (I'm relatively vanilla). I also stumbled upon a Japanese version of "Two Girls and a Cup" which, as in the case of the original, I didn't watch to the end. And then there is a German website out there that is basically "Dear Abby" for ISIS wannabes. There I learned that while women are not allowed to divorce a man who beats them ("You should try to change him"), women may divorce men who are drug addicts ("[...] but it would be better if you tried to change him").

To Anonymous: Thanksfor the lead... already found it online somewhere and watched a half hour somewhere. What... muscles. And Jesus is indeed a [clean-shaven] grower. But then, miracles are his business.

Yo! Interesting! I did some research. It seems like what you say is true, though LOADSTAR aka LOAD STAR — "the most controversial film ever made" says an old and cheap flyer findable online — seems to be simply four of Sprague's loops strung together to make a feature-length film and not a "real" film. But Jesus does indeed pork the priest for the "Resurrection" episode. The Son of God sure gets around, doesn't he? (Slut. Love your muscles.) Trivia: Sprague ended up being the "teacher of the year" in 2003 at Marietta High School in Marietta, Georgia, where he worked as a teacher until his retirement in 2010. Dunno what happened to the priest, Bruce Morgan, also a former Colt model, but we love his muscles, too. In Sprague & Morgan's prime, had we known them, we might have been tempted to find religion long enough for a three-way... but they would've had to be interested in chicken for that. But, to get back to the subject: Anyone else out there know of any Jesus porn? Let us know...