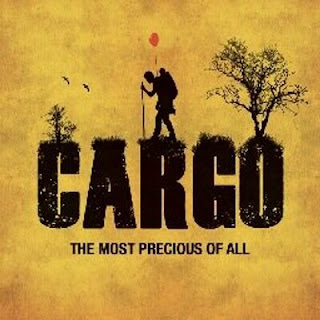 As most of the world seems to have Netfux by now, you have probably already heard of the 2017 feature-length Netfux production entitled Cargo (trailer), a well-made zombie flick starring Martin Freeman (of Ghost Stories [2017 / trailer] and more). Basic plot: Urban Aussie citizens Jane and Joe Schmoe houseboat away from a viral apocalypse with their baby in tow, but some careless behavior ends up seeing the now widowed and infected daddy running against time as he searches the outback for a safe haven for his uninfected daughter. To be blatantly and — amongst our circle of friends — realistically sexist: Cargo is the kind of zombie movie that fans of the undead (as in: most men) can watch with non-fans of the undead (as in: most significant others) 'cause it's not just about carnage. And there's a baby involved. (Goochy-goochy-goo.)
But although you may know of the movie, unless you happen to be from The Land Down Under, you probably don't know that the Netfux production is a fleshed out version of an Australian short film of the same name made in 2013 by Ben Howling and Yolanda Ramke, the very same duo behind the new feature-film version. The full-length 2017 version is definitely of broader vision, trying as it does to flesh out the narrative even as it tweaks the conventions of slow-moving zombiedom, involves the indigenous people, and critiques Colonial thought processes. For that, however, the original short film, which consists primarily of key scenes later integrated into the feature film, is a lean but emotionally powerful ode to familial love and responsibility. It was shot over two days with a budget of around $4000.
The feature-length movie is well worth watching. (The only reason we didn't praise it here at a wasted life is because, much like two other recent films we watched, Bird Box [2018 / trailer] and Hush [2016/ trailer], so many other people have written about Cargo that another review would be superfluous.) But if you just want to know the meat of the story of Cargo, then give this month's Short Film of the Month a go. Needless to say, if you have not yet seen the new full-length version, the following short film contains major SPOILERS. And feel free to shed a tear or two, we did.
Cargo (Australia, 2013):
PS: The woman with maternal instincts seen at the end of the movie is played by no one less than main scriptwriter and co-director Yolanda Ramke. And the Daddy of the short film is seen in the feature film as "the River Daddy" (a name that makes sense if you watch the movie).
Posted by Abraham at 3:24:00 PM