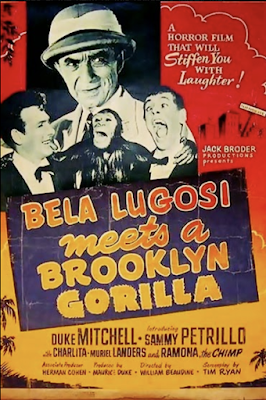 (Spoilers) Shot under the title White Woman of the Lost Jungle and eventually re-released as The Boys from Brooklyn, Bela Lugosi Meets A Brooklyn Gorilla is the movie Bela Lugosi (20 Oct 1882 – 16 Aug 1956) made after the Richard Gordon production Mother Riley Meets the Vampire (1952 / trailer) and before Glen or Glenda (1953 / trailer), so one knows what to expect when popping this public domain debacle into the DVD player: a rather over-the-hill, if still immensely professional, has-been in a cringe-worthy role. 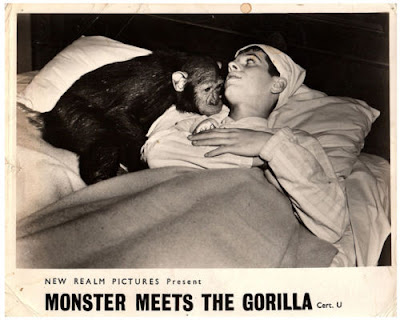 Bela Lugosi Meets A Brooklyn Gorilla is pretty bad, in every way, and while some find the movie of the so-bad-it's-good variety, we would argue that too much of the bad is embarrassing and/or annoying for the movie to ever become as "fun" as a true "bad film" classic of the level of Robot Monster (1953 / trailer) or Glen or Glenda. The only aspect of the movie that is in any way enjoyable is the pulchritude of the leading female character, Nona, who is played by a statuesque brunette one-name starlet, Charlita (born Clara Isabella DeFreitas [5 July 1921 – 28 Jan 1997]), whose mostly unnoticed non-career was one usually spent in the background or on the fringes playing a minority (i.e., Mexican or Indian) of less than stellar character. She not only looks delicious in her at times rather ridiculous but extremely well-sewn and tight "native" garb, but is hardly the worst actor of the movie. (Not that one can really talk about "good" acting when it comes to a movie like this one.) That's her below, doing cheesecake, on the cover of an exceedingly inappropriately named magazine. 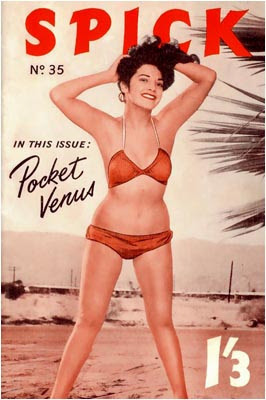 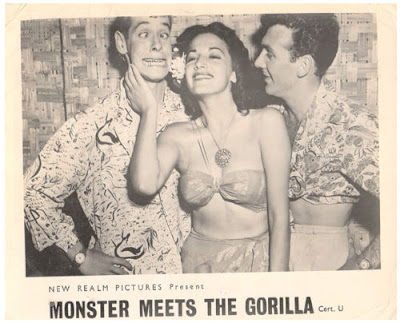 Jerry Lewis, even in his days together with the underappreciated Dean Martin, was/is one of those performers one either likes or hates.* But regardless of one's opinion of the real Lewis, seventeen-year-old Sammy Petrillo, in his imitation of the real thing, channels everything that makes Lewis irritating and amplifies it, resulting in a Jerry Lewis from Hell, a monstrously annoying creation that has one screaming for one's Second Amendment rights and the nearest gun store. Worse, at the point in the movie that he, as a character, finally shows a commendable trait as a person — he takes a bullet meant for his friend, Duke — Bela Lugosi Meets A Brooklyn Gorilla goes totally WTF and cops out with that classic cop-out ending guaranteed to alienate the audience: the whole thing is nothing but…. Go ahead, guess.
* Outside of France, that is. There, everyone likes him. But then, they also like Louis de Funès (31 July 1914 – 27 Jan 1983). 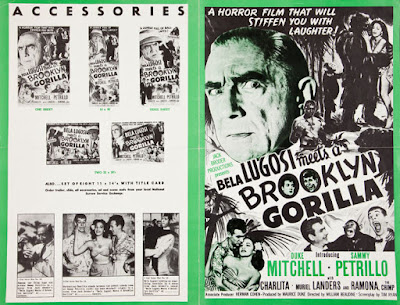 As for Lugosi, who plays the nefarious Dr. Zabor, he looks less ill or drug-addled than he does old and tired, but despite his appearance he remains oddly smooth and relaxed, as if he is simply walking comfortably through a role he had already played dozens of times before (but then, that is exactly what he is doing). Playing a typical mad scientist living in a castle on a tropical island, Lugosi looks all his 70 years of age, which makes his hots for Charlita — a plot-driving aspect of the narrative — border on almost cradle-robbing perversity. (OK, Charlita is a mature 31 in the movie, so Lugosi is hardly robbing the cradle, but he nevertheless comes across as a letch and she as a victim of continual sexual harassment. In the regard of the latter, she gets it from Duke as well, but likes it. [Ah, yeah, how we miss them: those good old days when it was OK to sexually harass a woman as long as you were at least the best-looking guy around.]) 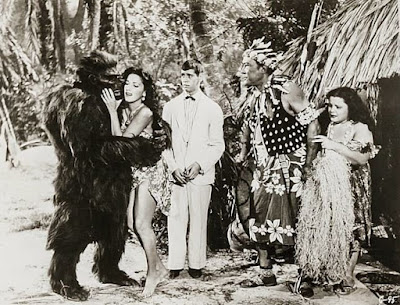 Bela Lugosi Meets A Brooklyn Gorilla looks very much like a no-budget production, but as history has often proven, the right director and the right scriptwriter can work wonders. William "One-Shot" Beaudine (15 Jan 1892 – 18 March 1970), however, was always less an auteur than a workman, and his perfunctory style reveals far more a stodgy determination than a creative eye or visual flair. It could be argued that his talents reached their maturity with the early prestige production and silent film classic Sparrows (1926 / trailer), and that his directorial style never developed any further (if not even retrograded later). In Bela Lugosi Meets A Brooklyn Gorilla, in any event, he does nothing to enliven the movie visually — but then, hampered with a script as creaky and unfunny and uncreatively inane as that supplied by Tim Ryan (5 July 1988 – 22 Oct 1956),* as well as a starring duo as annoying as Mitchell & Petrillo, he probably just wanted to finish the job and go home.** 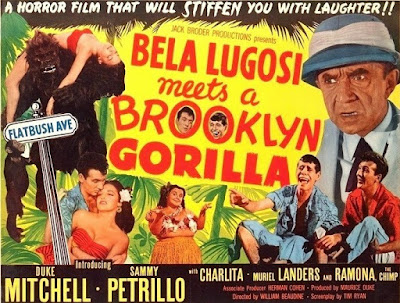 * Ryan, the first husband of Irene "Granny" Ryan (17 Oct 1902 – 26 April 1973) of The Beverly Hillbillies (1962–71 / theme), was a character actor and background filler who supplemented his acting income as a screenwriter. Appearances of note: He's the proprietor of a diner in the Poverty Row classic Detour (1945/ trailer / full film), and one of the threatening detectives in the sorely overlooked film noir, I Wake Up Screaming (1941 / trailer). Detour, by the way, is an excellent example of how the right director can make a difference.

Full film:
** As dull as he was as a director, Beaudine did make a few films of note other than just Sparrows. He did the mid-career WC Fields film The Old Fashioned Way (1934 / trailer), for example, as well as the classic exploitation film produced by Kroger Babb (30 Dec 1906 – 28 Jan 1980), Mom and Dad (1945/ clip), which was even added to the Library of Congress' National Film Registry in 2005. Arguably, however, if Beaudine's name is familiar to anyone today it is due to his classic double-whammy of cinematic flotsam from 1966, the hilariously horrible horror disasterpieces, Billy the Kid Versus Dracula (trailer) and Jesse James Meets Frankenstein's Daughter (trailer). 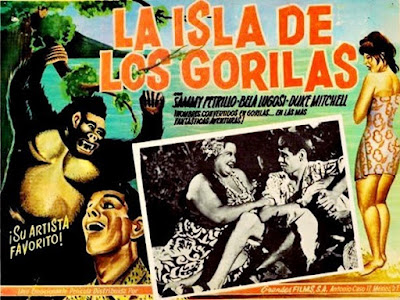 While there are one or two absurdly funny jokes in passing (like how the two heroes even come to be on the island, and virtually every appearance of Bongo the Witchdoctor [Milton Newberger]), most of the humor hinges on Sammy Petrillo's Jerry Lewis imitation and the fat jokes related to Nona's overweight and man-hungry sister Saloma (Muriel Landers [27 Oct 1921 – 19 Feb 1977]), neither of which are easy to laugh at: the fat jokes are much too plump — Hah! Hah! — and their intended object much too much more likeable than Petrillo. In turn, Petrillo is such a flamboyantly mentally challenged figure that when he does manage to instigate a rare laugh, the viewers feel as if they are laughing at a mentally handicapped person, something that most people outside of today's White House and/or Republican Party feel uncomfortable doing. 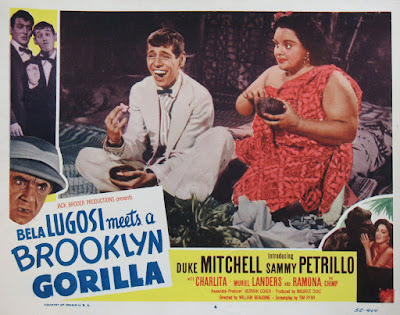 In the end, however, ragging about Bela Lugosi Meets A Brooklyn Gorilla is a bit pointless, like flogging a dead horse or talking to a Trump supporter. The little fame the film retains (aside from the Martin & Lewis imitation aspect) is that it is infamous as a being one of the worst movies ever made. And that it is — so anyone who chooses to watch it should know what to expect. But in the end, the movie is not even all that enjoyable as a bad movie, if only because when it finally enters the level of mega-insaneness that is enjoyable, it cops out. Undoubtedly, with the right amount of smoke or beer the movie is more fun, but if you take this movie straight, as we regrettably did, you have only yourself to blame.* 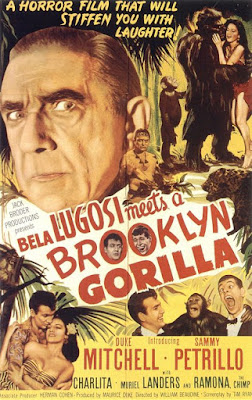 * Addendum about Petrillo. While he never had a film career of note, he did make an occasional future film appearance. In the truly entertaining and often shocking trash classic The Brain That Wouldn't Die (1962), for example, he makes an un-credited cameo as one of the cheesecake photographers taking photos of Doris (Adele Lamont [7 Aug 1931 – 24 Nov 2005]) in a scene famously shot in two versions, one in which she is skimpily dressed and one in which she lets her impressive assets hang free and unashamed. The year before, he also semi-revived his Jerry Lewis imitation act when he played Sammy in the totally forgotten nudie-cutie Shangri-La (1961), a movie which, unbelievable enough, had "visual effects" supplied by the great photographer, Arthur "Weegee" Fellig (12 June 1899 – 26 Dec 1968). Roughly a decade later, Petrillo played a double role in Keyholes Are Made for Peeping (1972), another amazingly mind-numbing film by the great auteur of bad movies, Doris Wishman (1 June 1912 – 1 June 1912). And while his face was probably last seen onscreen in the seemingly lost film Out to Lunch (1977), his final feature film job that we could locate was when he, according to Psychotronic Video 11, dubbed the voice of the minor character Mr Boden in the violent and sleazy grindhouse horror classic, Humanoids from the Deep (1980 / trailer).
From the movie –
Duke Mitchell, Deed I Do:
Posted by Abraham at 10:29:00 AM