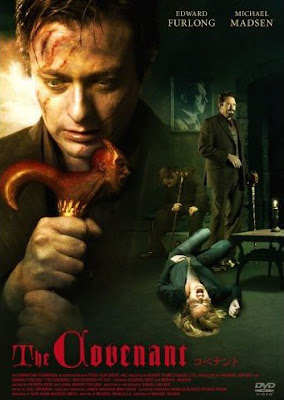 Aka Canes, its original title, used when the film was presented, inexplicably, at the Cannes Film Festival of 2006.
The opening interlude of The Covenant: Brotherhood of Evil, set somewhere in Nazi-occupied Europe of WWII, is one of great promise. Neither badly shot nor that terribly acted, it is nevertheless hilariously ridiculous — love how the crucifix on the wall suddenly slides upside-down when the  Satanic cane is removed from the simple wooden box below it, and how the priest who had been protecting (?) it just suddenly spontaneously combusts — and gives rise to the expectation of some possibly entertaining cinematic flotsam. But this laughably entertaining opening is truly the highpoint of the movie, which promptly moves the narrative to modern day USA (circa 2006) and falls apart, revealing itself to be a tedious and idiotic and definitely non-entertaining waste of time. 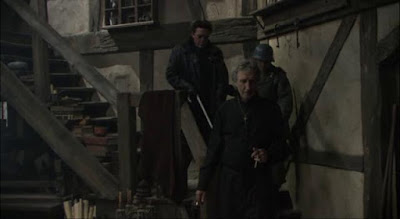 That it is as bad as it is, however, is to be expected. Alone a look at the headlining names, Edward Furlong and Michael Madsen, reveals a thespian pedigree that portends cinematic disaster. Furlong may have been an actor to watch at the beginning of his career (see: Terminator 2: Judgment Day [1991 / trailer], the intensely depressing Little Odessa [1994 / trailer], and even John Water's Pecker [1998 / trailer]), but his career of the last twenty-odd years hasn't been one to write home about, though he is employed often enough to afford his  "chronic substance abuse and alcoholism". (In this sense, he's doing better than we are.) 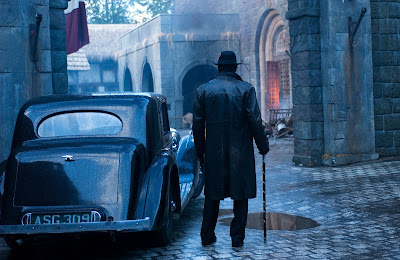 As for the extremely busy Michael Madsen, though an uneven actor who seems unable to say "No" to any paying script he's offered, under the right director he generally excels (see, for example: Ridley Scott's Thelma & Louise [1991 / trailer] and almost any given Quentin Tarantino movie). But director Michael Bafaro, the independent director behind such less than memorable direct-to-DVD product like The Barber (2002 / trailer), The Cycle (2009 / trailer), Wrecker (2015 / trailer) and Embedded (2012 / trailer), is definitely not the right director.

Considering that scriptwriter Michael Angelella once penned, long ago, the unjustly unknown and highly amusing over-the-top trash disasterpiece Mother (1995 / trailer), it is almost odd that The Covenant is so slow and dull and unentertaining. But sometimes lightning strikes only once — but then, also, unlike The Covenant, Mother was directed by a capable auteur, if one with a low output: Frank LaLoggia (see: Lady in White [1988 / trailer] and Fear No Evil [1981 / trailer below]).
Trailer to Frank LaLoggia's
Fear No Evil (1981):
In The Covenant, Furlong, looking somewhat dry and showered but nevertheless unhealthy and bloated, rather unconvincingly plays a successful PR man named David Goodman who first doesn't get the promotion he so coverts and is then blinded when some guy who likes to vandal car tires spray-paints him in the eyes. Even his generically hot blonde wife Lisa (Chandra West of The Salton Sea [2002 / trailer] & Tobe Hooper's Night Terrors [1993/ trailer])* can't get him out of the resultant funk. But then the mysterious Guillermo List (Michael Madsen, in a fake goatee that one hopes he was paid extra to wear) shows up and gives David a demonic cane that restores his eyesight and turns him into a murderous businessman who'll stop at nothing to climb the corporate ladder, porks his secretary (Jenny Mitchell), and hallucinates a lot… 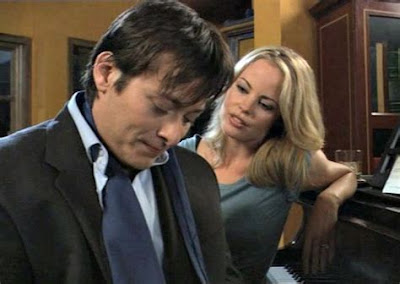 * What once must have seemed like an unbelievable pairing — a bloated, self-absorbed and dislikable dude and a way-too-hot loving wife — would be beyond believability were there not, in real life, a fatter & uglier egoistic blob and a surgically enhanced semi-MILF in the White House. To give credit where credit is due, though, Chandra West is better at portraying a loving wife than Melania. 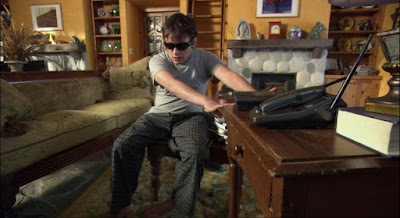 Believe us, The Covenant: Brotherhood of Evil is even more boring than it sounds. Worse, though it a train wreck of a movie, it isn't even a fun train wreck. There are a few sniggers here and there — preeminently, Madsen's goatee — but not enough to make the movie all that fun. Scary, in any event, or suspenseful, it is definitely not, and that combined with such a dearth of laughs guarantees a forgettable viewing experience. 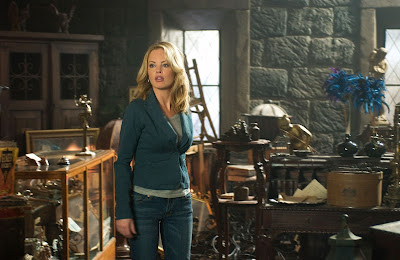 The Covenant is a lot of nothing that really goes nowhere. Grouchy David (i.e., Furlong), a man too stupid to ever close the front door behind himself, always looks like he didn't sleep enough and/or has severe constipation. Never convincing, whether as a businessman, blind man, stud, murderer, man who loves his wife, or defender from evil, Furlong is a sad sight to see onscreen. Wifey Lisa (i.e., West) wanders around looking lost, either at home in her nightclothes following strange sounds around the house or fully dressed around town trying to uncover the truth; oddly enough, each and every person she turns to for assistance is killed, but she makes it unscathed until the very end. The climactic "good vs. evil" battle between David and List (i.e., Madsen) should have been more hilarious than Madsen's goatee, but is only anti-climactic in every way. The ending, swiped directly from The Devil's Advocate [1997 / trailer], has no punch but at least ends up offering the final and biggest laugh of the movie. 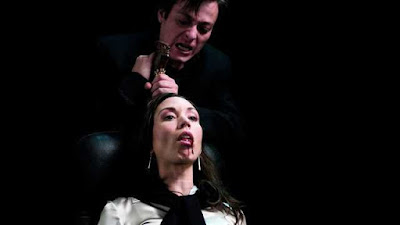 The official advice of a wasted life: skip Canes and, instead, help Frank LaLoggia's Mother gain the infamy it deserves.
For your added irritainment —
Edward Furlong's #1 Hit in Japan,
Hold on Tight (1992):
Posted by Abraham at 1:19:00 PM