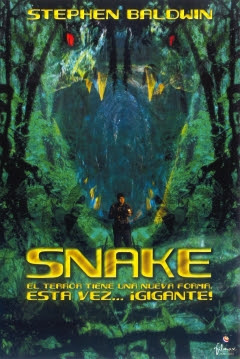 Aka Snakeman, this SyFy (nee, SciFi) Channel TV movie got released in Europe as a direct-to-DVD "movie", and somewhere, somehow, a copy of that DVD release appeared in our to-watch pile. And watch it we finally did do…
German Trailer:
An invertebrate liar — let's say, someone with the honesty and grasp of reality as the National Embarrassment busy destroying the USA's future when he isn't watching TV or tweeting idiocies — might say that The Snake King is a good film. But, as we do like to at least tell an approximation of the truth, we won't say that. Instead, we'll admit: The Snake King is one shitty film. It is cheap and by the numbers and full of stock characters (if any of the figures can even be said of being a "character"), it is predictable and badly made, and there is ALMOST nothing about the movie that in any way could qualify as good. 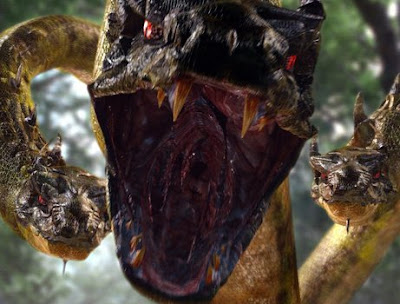 To clarify that "almost": the stock footage of the Rain Forest is actually rather top notch. 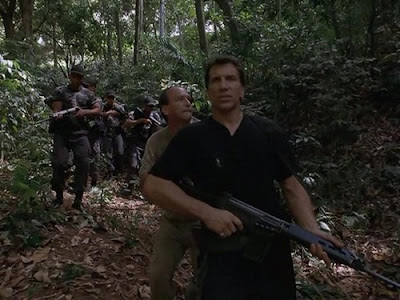 But as crappy as the movie is, it is also rather fun in its own idiotic way, and with a six-pack and a joint and the right company, The Snake King becomes a rather enjoyable viewing experience. Its very cheapness is part of its appeal, and as whole the movie comes across less like an insult to one's intelligent than a full-color, semi-state-of-the-cheap-arts, contemporary recreation of the disposable Poverty Row second features that padded the screening hours of American cinemas for much of the prior mid-century. And as poorly made as it is, the technical and thespian aspects of The Snake King nevertheless truly slut-shame other bottom-of-the-barrel, Z-grade SyFy Channel turds like Christopher Ray's Mega Shark Vs Crocosaurus (USA, 2010) and/or Shark Week (USA, 2012). 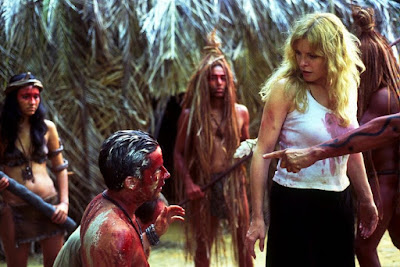 It is easy to imagine the genesis of the movie. Someone decided it was time to do an Anaconda-style snake movie, but with an even lower budget. Then someone probably said, "Wouldn't it be cool if the snake had three heads?" (Even later, after the filming was already underway, someone then said, "Wouldn't it be cooler if the snake had five heads?" — which explains why the number of heads on the snake keeps changing.) Then a list of stock characters was put together (roles later filled with a bunch of cost-effective semi-actors), an [faked] exotic location chosen, a typically inane MacGuffin thought out, and a death scene or two timed in at every 10 to 15 pages. (And then when they realized that they didn't have enough characters to keep killing until the end, a whole new airplane full of snake fodder was written into the script.) The sheer mundanity of the by-the-numbers script reveals a deep familiarity with the clichés of low culture, trashy family cinema, and way too many years spent in front of the TV watching after-school Creature Features. 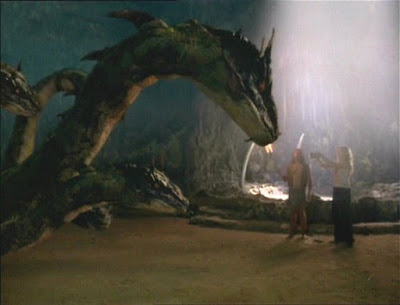 There is little about The Snake King that in any way speaks of quality, but at least one gets the feeling that everyone involved knew what they were doing and, instead of using the film as an opportunity to flip the bird at the audience, decided to have a good time and do their best. True, considering its Rain Forest jungle setting and the involvement of indigenous tribes, the film misses the chance of displaying a parade of naked "native" breasts and/or dangling weenies, but then it is an American TV monster flick and not some Italo cannibal gut-muncher. (Go here for a masterpiece of that.) 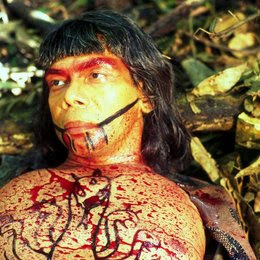 And the plot? OK, some evil mega-concern discovers that the secret to longevity lies with some isolated tribe and sends down two scientists, Dr Susan Elters (Jayne Heitmeyer) and Dr. Rick Gordon (Larry Day of Night of the Demons III [1997 / trailer]), to make contact with the tribe. They hire the helicopter-flying guide Matt Ford (Stephen "I Have Seen the Way" Baldwin of Posse* [1993 / trailer]), but due to Gordon's alpha-man idiocy** the helicopter crashes with the entire team in the jungle. Of course Matt is friends with the local natives of the Jaguar tribe (who wear fake cat whiskers!), so in no time flat a couple of inordinately loyal indigenous, acting as human pack horses on the trek to the "near-by" camp, are added to the fodder list. But before they can get to the camp, all those who don't fall victim to the three-to-five-headed snake end up prisoners of the Snake Tribe, who are pissed that the mega-concern has stolen a stone sarcophagus of great religious significance… 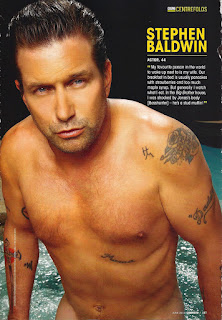 * A film much better than its general obscurity would lead one to believe. 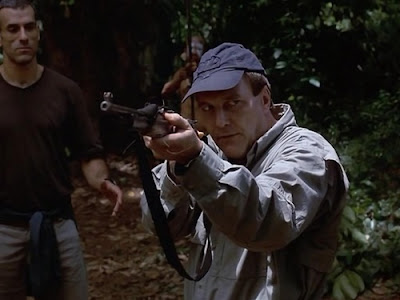 ** OK, the do-we-or-don't-we-fly scene, while neither the first nor the last scene to show Rick as a privileged macho asshole, definitely underscores the fact that he is… But: in all truth, if Matt truly thought it unsafe to fly, it was his responsibility as the experienced pilot to say "No." Still, Rick is a total dick, so one keeps waiting for him to die… And waiting, and waiting, and waiting… Kudos to the movie for keeping such an asshole around for such a long time. 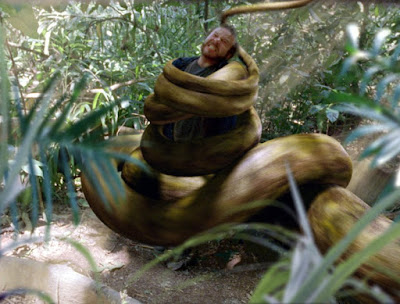 Again: The Snake King is a bad movie. But bad can be fun, and this movie is fun — it kept us entertained and laughing up until it final, moralistic ending portending a happy (and probably long) future for Susan and Matt within the Snake Tribe. But any movie that begins with a cheesy double death and ends with a cheesy massacre and makes use of every cliché available in-between is simply hard to hate. 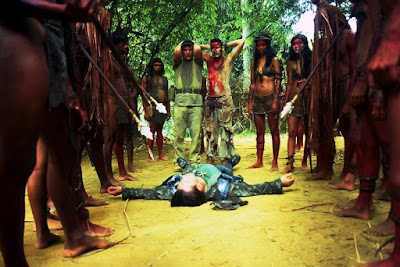 Director Allan A. Goldstein, in what appears to be his last directorial effort to date — his not overly short list of C-film credits includes movies produced by Maria Rohm — keeps the action going quickly enough and keeps his shots easy and clear. The CGI is pretty cheap, but its ridiculousness adds to the film's enjoyment factor. The acting is across-the-board serviceable, although it is bad enough that Stephan "Am I Dry?" Baldwin almost comes across as if he were acting, too, instead of just going through the motions. It is Larry Day's turn as alpha asshole Rick that is the most fun, though: verging on camp, one has a strong desire to hiss and throw popcorn whenever he appears (in part, probably, because he is as a character so reminiscent of so many privileged white assholes of the type everyone has had to deal with somewhere along the way). He is only outshone when the hands-on, white, privileged, mega-asshole boss of the concern, Dr John Simon (Gary Hudson), shows up with his team of muscle-bound mercenaries — fodder, one and all, as they deserve to become for not showing, via full frontals, whether every body part is proportional in size. 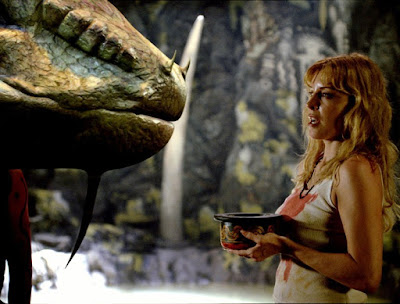 The Snake King, good for laughs, but awful in every way — and one you can watch with the kids, if needed. They might even take it seriously. 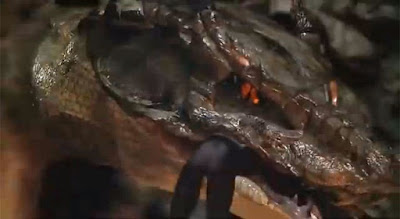