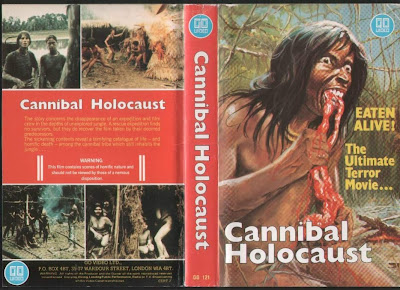 Final Girl did a review of one of the more infamous slashers of the 80s, William Lustig's Maniac (1980 / trailer), in which she mentions that "It's certainly a film to be appreciated rather than enjoyed." A statement that is in every way applicable to this filthy, unsettling and infamous masterpiece of Italo sleaze directed by Ruggero Deodato that very same year. Like Maniac, Cannibal Holocaust is a legendary film that has been discussed endlessly and that now, 30 years after its original release, does indeed show some grey around the edges but nevertheless still delivers a strong punch in the gut; like many an aged masterpiece – Night of the Living Dead (1968 / trailer / full film), Sweet Sweetback's Baadasssss Song (1971 / trailer), The Texas Chainsaw Massacre (1974 / trailer) – it might look a bit old and, despite the nudity and sex, and it might not offer the Baroque excesses of contemporary exploitation and genre films (it is neither as ironic as, say,

Planet Terror [2007 / trailer] nor as blood-frosted as, say Vampire Girl Vs Frankenstein Girl [2009 / trailer]), but it never loses any of its strength or effectiveness: it is as unpleasantly powerful today as when it was made, even if we do know – as Ruggero Deodato had to prove in court – that none of the actors were actually killed in real life (not even Lucia Costantini, the Columbian seamstress that made her only film appearance ever as the girl impaled on a stick, the iconic image of the movie). Cannibal Holocaust can rightly be said to have balls, big balls, balls that haven't shrunk with age – it is a Shane Diesel amongst the films of its ilk, and as such it takes you from behind with but the barest of lubrication.

Cannibal Holocaust must exist in a dozen different edits; the version we just watched had "Uncut" pasted all over the DVD box, but since the only animals killed on screen were the water rat, spider and snake, we obviously had an "animal friendly" version – but, for that, all the full frontal male nudity remained, as did the realistic looking sex scenes, castration, rape, leg amputation, forced abortion and enough other unusually unpleasant sights to make us think that our version at least wasn't a shredded version.

Cannibal Holocaust is the second of Deodato's unofficial "Cannibal Trilogy," three films he made that build a trilogy only due to the fact that they are all from the same director and are about civilized man's confrontation with primitive cannibals in the wilds of the Amazon. The first of the three is Last Cannibal World (1977 / trailer), which was actually initially conceived as a sequel to Umberto Lenzi's Man From Deep River (1972 / trailer) and only became an independent project after Lenzi bowed out.* A hit, Deodato was soon approached to do another cannibal film, and the result was Cannibal Holocaust. Cut and Run (1985 / trailer), a kind of cannibal-tinged take on Apocalypse Now (1979 / trailer), came out five years later and features a very Anglo and culty name cast for a Deodato film (Lisa Blount, Richard Lynch, Michael Berryman and Karen Black). As mentioned, none of the three films shared any connecting characters or are in any way a continuation of a storyline, so they need not be seen in specific order or as a group.**

The events of Cannibal Holocaust agitate in two worlds, that of the wilds of the Amazon and the concrete jungle of New York City. New York anthropologist Professor Harold Monroe (Robert Kerman***) is hired to locate a documentary film team that has disappeared into the wilds of South American rain forests. Accompanied by two guides, Chaco (Salvatore Basile) and his assistant Miguel (an unknown, uncircumcised Columbian), Monroe follows the tracks of the film team deep into the wilds, where he encounters two warring indigenous tribes, the Yacumo and the Yanomamo.

Gaining the trust of the latter, he discovers the remains of the film teams as well as cans of their undeveloped film. Back in New York, as he goes through the now-developed film he learns to what extent the four members of the documentary were willing to go to make their film – and the terrible things they did that led up to the natives killing them...

It would be impossible to argue that Cannibal Holocaust is not an exploitation film; it wallows way too deeply in shock and sleaze to deny its true roots. For that, however, it does offer some thematic and innovative aspects that put it a notch above the average cannibal film of the genre's heyday (77-81), if not general Grindhouse sleaze. In regards to its use of "found footage" – a good two-fifths of the events shown on-screen occur in the found footage of the documentary film crew that went missing – the film is the true granddaddy of the found footage horror film so popular today since The Blair Witch Project (1999 / trailer) helped make the technique one of the most banal, overused visual clichés of contemporary horror.

But whereas today's horror films of this ilk – Apollo 18 (2011 / trailer), Cloverfield (2008 / trailer), [REC] (2007 / trailer), to name but a few – use the technique for the technique, Deodato chose the technique due to the film's inspirational source, news and documentary reporting, as well as his desire to criticize the integrity of news reports in general and, possibly and to a lesser extent, the highly popular mondo documentaries of questionable verisimilitude such as the "shockumentaries" Mondo Cane (1962 / trailer) and Africa Addio (1966 / trailer) by his landsmen Gualtiero Jacopetti and Franco Prosperi.****

Indeed, the example documentary of the four missing film-makers that Prof. Monroe watches, "The Last Road To Hell", bears more than a certain similarity to the type of stuff found in the average Gualtiero Jacopetti mondo documentary – and despite the assurances of the producer that the scenes are all faked, they look very, very real. (Whether or not the war execution scenes are real or not is still disputed: for every source that says they too are fake, another says they are real – real or staged, they are disturbing and distasteful.) Later in the film, however, through the found footage that the good Professor recovers, we learn to what extent the quartet of documentarians were willing to go to "stage" the scenes they required for their films – and we very quickly realize that it is not the primitives of the jungle who are the true savages.

The four representative of the civilized world rape the women, burn the houses, shoot natives and kill the prized animals and fuck***** publicly in front of the tribe when driven wild by their own feral excesses – by the time the four finally get hacked and chopped (a scene that includes a graphic castration done in an uncut shot), it is hard to feel any sympathy for them at all. (Indeed, especially if you view the impaled girl as one of their actions – a view that would explain the gloating satisfaction Alan [Carl Gabriel Yorke] initially shows when they film the dead girl – by the time the team dies you can only think "It's about time.")

Cannibal Holocaust is essentially two films in one: the almost typical going-down-the-river adventure film and the perversely violent found footage that are like the home movies of a group of sadists. If the former sometimes falls a bit flat, the latter never loses its sense of being "real" and thus gives the viewer the feeling of having an insider's view to something, well, that they perhaps would prefer not to be part of. Combined, the effect is a roller coaster ride of mixed emotions and visual assaults. In every way, but for the beautiful score, which is another example of Riz Ortolani's ability to compose total aural seduction, Cannibal Holocaust is certainly a film to be appreciated rather than enjoyed.
If you haven't yet seen it, you should.

**** It is interesting to note that the makers of both those films were also taken to court for the latter film on the charges that they supposedly paid to have some of those seen killed on film killed specifically so they could film them; the film-makers were acquitted.
***** Though not hardcore, the fuck scenes are remarkably realistic; Whether or not the two characters, Faye (Francesca Ciardi) and Alan (Carl Gabriel Yorke, last seen in the background in Idle Hands [1999 / trailer]), really fucked is the stuff of legends. For years, both actors maintained the sex acts were simulated, something Yorke still insists today, while Ciardi went on the record in 2009 as saying that they screwed for real (on and off set) and only said otherwise because Yorke was in a relationship back in the US.


The classic theme to Cannibal Holocaust: