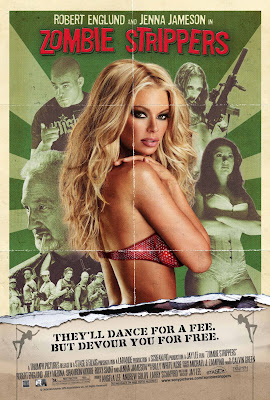 No artsy-fartsy and oblique title here—this exploitation flick says what it offers and offers exactly what it says: Zombie Strippers! So, if you're into strippers and like zombies movies, this is the film for you—but if either ain't your bag, you should leave this film on the DVD store shelf.

Zombie Strippers! was written and directed by Jay Lee, a relatively unknown name but one that seems to hold promise. In 2006 he offered the world The Slaughter (2006 / trailer), a low budget B-film that took one of the world’s oldest plots—the same one, essentially, as found in The Hazing (2004 / trailer), Hell Night (1981 / trailer), Demon Slayer (2003 / trailer) and thousands of other films—and added enough cheap gore, humor and breasts to make the film fun. He more or less does the same thing in Zombie Strippers! and once again the final product is a well-shot and relatively well-acted (in a campy way) B-flick with no pretensions that never overstays its welcome and offers a lot of laughs, gore and plastic tits. Camus it ain't, but fun it is…

OK, the flick's opening is a bit dated already, but it is nonetheless still good for a giggle. In the not so distant future—or in a parallel universe, take your pick—President Bush has just been elected for the fourth time (with Arnie as the Vice Pee) and the USA is at war with, well, about everyone who ain't a Republican, and some who are (Alaska, for example). The ever-increasing number of soldiers needed to protect the American Way of Life is excelled only be the ever-decreasing numbers of soldiers available, so in the conservative nest of Sartre, Nebraska, a secret government labia—I mean, lab—is developing a "chemo-virus" to reanimate the dead so as to have a never-ending supply of patriots for the fronts. Of course, as to be expected in a government project, things go S.N.A.F.U. and the Z Squad, special military unit, is called in to clean the mess.

When the odd-man-out of the unit, Byrdflough (Zak Kilberg of Sweet Insanity [2006 / trailer]), is bitten, he goes on the run so as not to be terminated and takes refuge in an illegal, underground strip joint run by Ian (Robert Englund, slumming it and having fun). After turning, he bites the star stripper Kat (Jenna Jameson, so lifted and shifted and full of plastic that she almost looks like a zombie before she puts on the make-up) and before you can say "lap dance" the place is full of super zombie strippers pulling in the cash (and filling the basement with zombified customers).

One by one the remaining strippers are confronted with the decision of whether to go with the flow or not, but then inter-zombie stripper rivalry results in the release of the imprisoned dead males and the shit hits the fan…
The story, like the film, is hardly intelligent, but then Zombie Strippers! isn't aiming at the intellect. Jay Lee uses his slim plot as an excuse for a never-ending flow of laughs, gore of variable quality and dancing naked babes with bodaciously bulbous but mostly stationary boobs—and in all three aspects, he deals a Straight Royal Flush.

The concept of "thinking" zombies might be blasphemy within the realm of the traditional zombie flick, but it fits logically when the early explanation of the development of the virus as explained by the woman scientist is kept in mind (at least it does all the way up to the big climax, when some zombies that should be able to "think" don't and one who shouldn't does).
Love that donkey, by the way—but not as much as the babe who plays Berenge (Jeannette Sousa), whose unnecessary demise does end the film on a bad note.
Posted by Abraham at 10:06:00 AM