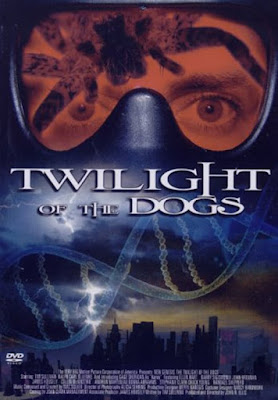 (Spoilers.) Aka New Genesis and Fucking Lousy Film. How many ways can one say a movie is a waste of time? "We saw it so you don't have to"? Said that already. "This film will make you stupider than you already are"? Said that, too. How about the classic line, "This thing sucks donkey dick"? It does, but we've already said that about other movies, not to mention our current president, The Dumpster. 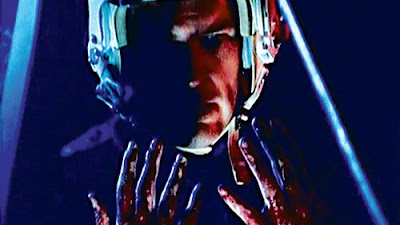 In any event, with Twilight of the Dogs, we have something rare: a movie that truly seems not worth writing about. But, shit: if a donkey dick-sucking toadstool incapable of telling the truth can make it to the White House, we can surely manage to write a review of a movie not worth writing about.
TWILIGHT OF THE DOGS - video trailer - Raven Releasing
from John Ellis on Vimeo.
Truth be told, the only reason we bothered to pop Twilight of the Dogs into our DVD player was because it was the second of two films on a double DVD, the other being the indefinitely better but nevertheless stupid piece of flotsam called Ivanka Trump Cult (2007), and we wanted to free the shelf space. The space is free now, but perhaps we should have just simply tossed the DVD instead of watching it and saved our time by doing something constructive like masturbating or picking our noses or banging our head against the wall. All three being more fun things to do than viewing this filmic fuck-up. There is justifiable reason why Twilight of the Dogs remains, 23 years after the fact, director John R. Ellis's only feature-film directorial project: he is not any good at the job. 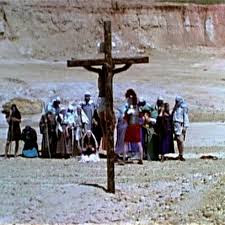 When it comes to what Twilight of the Dogs is about, the plot description found all over the web is right: "One upon a time in the future... a man and his cow fight against an evil cult leader." That said, the flick isn't half as interesting as that description makes it sound. 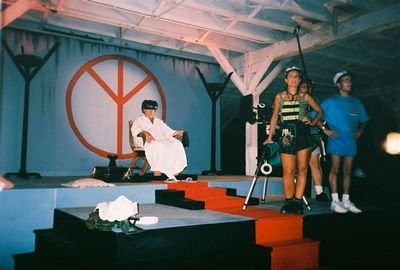 We don't know who played the cow (Melania?) but the man in question, "Sam Asgard", is played by sci-fi author and no-budget filmmaker Tim Sullivan, who did a much better acting job in his acting debut, the almost as atrocious horror flick, The Laughing Dead (1989). Sullivan also scripted Twilight of the Dogs, which initially might seem odd since Sullivan is an avowed atheist and the movie is extremely religion-obsessed. But then, the main religion of the movie, led by a power-hungry and blood-thirsty megalomaniac named Donald Trump Reverend Zerk (Ralph C. Bluemke*), is hardly a positive reflection of blind faith, while Karuy (Gage Sheridan of Despiser [2003 / trailer]), offers all the miracles of a daughter of god but is only a sexually active and friendly alien babe. Her final demise is likewise also highly reminiscent of that guy who long ago pretended to be the son of god, Jesus, while her use of the movie's cow, Gertrude,** brings to mind both the "miracle of the five loaves and two fish" as well as of Jesus healing the sick (choose your favorite healing legend). And much like Saint Paul helped kill tons and then found redemption in Jesus, Sam, who killed all of San Francisco, finds redemption in Karuy.*** It would seem that Twilight of the Dogs is very much of the opinion that organized religion, which is subject to abuse, is not needed to do or be good or find personal redemption… what an earth-shattering realization. 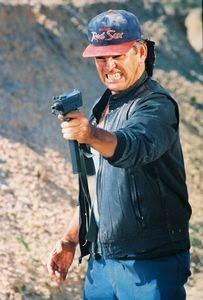 * The director of the hard to find non-masterpieces I Was a Teenage Mummy [1962] and The Kid and the Killers [1974], not to mention Robby [1968 / trailer], a movie often screened at NAMBLA conventions.
** If the trivia section at the imdb is to be trusted, "The cow that is central to the plot of this movie is named Gertrude, named after the duck in Journey to the Center of the Earth (1959 / trailer), one of [Tim Sullivan's] favorite films." (An aside: Unlike Gertrude the Cow, however, Gertrude the Duck gets eaten at the end.)
*** But whereas (at least as far as is known) Paul didn't actually get into Jesus, Sam does literally get into Karuy. And he manages to do so without the film getting even one gratuitous breast shot: an alien with modesty, Karuy always puts on her top right afterwards and never walks around nude. No one in the movie does the last, actually. Damn. 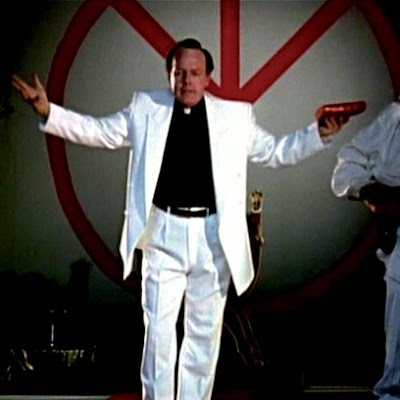 Okay, but to return to the technical aspects as experienced while watching the DVD. If we were to say that the cinematography Twilight of the Dogs was a masterful example of clarity, of the interplay and contrast of dark and light, foreground and background, of effective day-for-night shots, of a deep understanding of the capabilities of the cinematic form and the full expressive possibilities of a convincing mise-en-scene, we would be lying. As much as our president. Rest assured, the cinematography is a muddy mess and much of the movie — basically any scene taking place at night or inside unlit buildings — is a visually mucky, incomprehensible mess. (For the sake of doubt, however, let's blame it on the transfer. But the suck-ass editing probably isn't due to the transfer, it's due to how the flick was made.)

As Twilight of the Dogs was shot amidst the verdancy of Maryland, the infertility of the post-apocalyptic setting (and the corresponding food shortage) is never convincing, but at least the occasional postulant visages of the sick are properly icky. Still, one wonders about apocalyptic settings in which food and medicine is so lacking, but the women still have make-up available and sport [dirty] perms. Karuy's clothing, it must be said, also appear to be self-cleaning, for her totally 90s, padded-shoulder jumpsuit with female cummerbund is almost always impeccable clean. 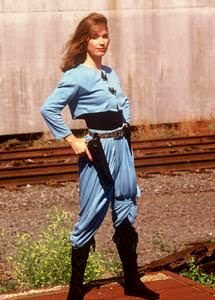 Speaking of Karuy, and to give credit where credit is due, Gage Sheridan is probably the best actor of the movie: unlike Tim Sullivan, who is often almost somnolent and always not convincing, or Ralph C. Bluemke, who chews the scenery every time he's on screen, she occasionally projects a level of believability that transcends the intensity of a high-school film production — which is what Twilight of the Dogs would feel like, and would look like, if the relevant parts weren't played by adults. 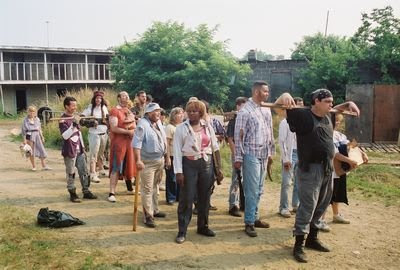 Oh, yeah: one last positive statement. The stop-motion, oversized black widow spiders are cool and seen much too seldom. Made us wish we were watching something, anything, by Ray Harryhausen. It is understandable, to say the least, that the man responsible for the big critters, Kent Burton, had not only previously worked on The Blob (1988) and Freaked (1993) and Ed Wood (1994 / trailer) and Screamers (1995), but went on to work on James and the Giant Peach (1996) and Coraline (2009) and Anomalisa (2015 / trailer). He do a good job... unlike The Dumpster. 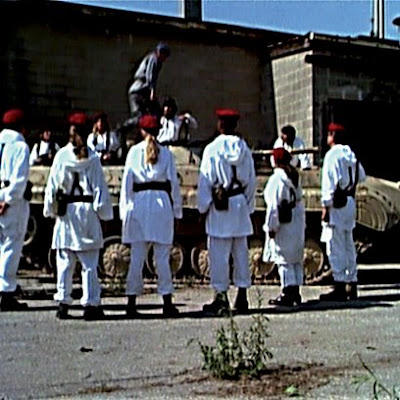 But enough. Twilight of the Dogs doesn't merit further critical attention. It doesn't merit any attention at all, if you get down to it. We heard-tell that this movie was never officially released, and that all available versions are bootlegs — not that our release looked like a bootleg, as it even had a barcode. In any event, bootleg or not, the movie isn't worth searching out and is even less worth watching. 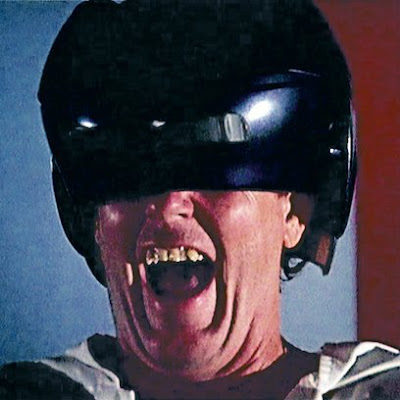 Our advice: Do your dishes instead, or contemplate your navel. Both actions are far more intellectually stimulating and satisfying than Twilight of the Dogs. 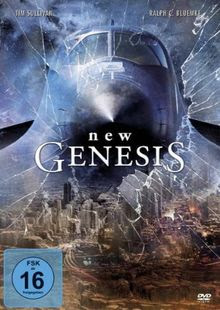