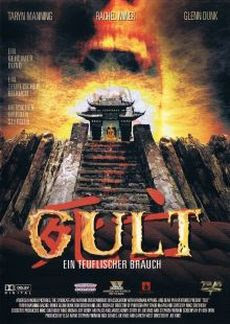 (Spoilers, not that it matters.) It's always a bad sign when less than three hours after one has watched a movie, one can no longer remember which characters lived and which died. That means, generally, that the given flick was pretty bad, and bad in a way that makes it instantly forgettable instead of eternally (or even temporarily) memorable. And far from being memorable in anyway, Cult is the kind of flick you want to sleep through and, if you're lucky, awaken briefly for the few scenes that are sort of fun to watch — scenes that make up a total of probably three minutes of the roughly 85 exceedingly sub-intelligent minutes that this poorly shot, acted and directed movie takes to play out and end. 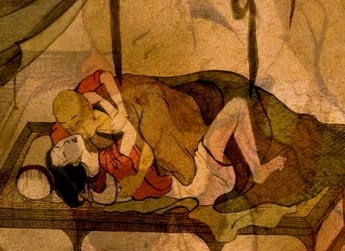 The faux-Asian artwork which is used for the first opening narrative explaining the origin of the cult, for example, is rather nice: artistically, it exceeds anything achieved cinematically anywhere else within the movie. And the second prologue scene soon thereafter — a bit closer to but still not "the present day" — in which a bunch of sexy, shapely babes in various states of bared skin poke their eyes out and then are all killed during the course of a ritual is sort fun in that tacky-movie kind of way. At this point, the promise of tacky trash and laughs is still inferred, but after that the pickings get slim and movie becomes a dull vortex of idiocy. 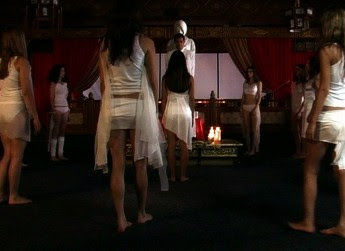 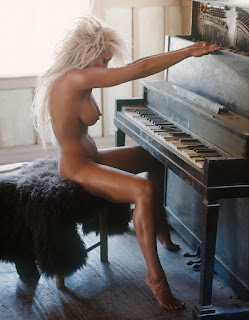 Other failures include the narrative, which is basically all over the place and nonsensical. The origin of the cult might make the grade because, well, religions and cults seldom make sense (e.g., the "Virgin Birth", Scientology's aliens, or even the only true god, Our Holy Flying Spaghetti Monster), but everything else about the cult sort of leaves one scratching one's head. (Is Kwan Yin, the non-virginal Holy One of the cult, evil or good?) 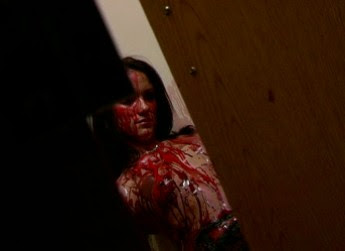 Who sent the VHS of the bloody ceremony to the final girl Mindy (played as a whiny egoist by an oddly dislikable Rachel Miner, of Penny Dreadful [2006 / trailer], Tooth and Nail [2007 / trailer] and Hide [2008 / trailer]) is a big question mark that is never addressed, as is the quickness with which the intrepid college students find the temple where it happened. Ditto with how the evil Owen Quinlin (Robert Berson) gets all his power despite the first ceremony going all wrong, how he chooses his victims, and the "Why?" behind the followers that follow him or don't. 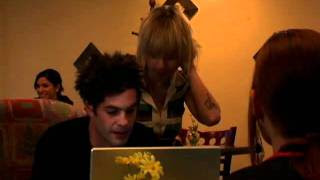 Unbelievably enough, even the nude shower scene is a total failure, as it is shot in way that definitely downplays the gratuitous nudity the scene screams for, but the eventual death of that actress after she enters a closed-off crime scene is passable. And is that single pot of mashed potatoes in the hands of Mindy's dad, Logan (Joey Sagal of Barb Wire [1996 / trailer]), who just happens to not only work at the same university Mindy attends but is also bonking Prof. MILF, truly supposed to feed a cafeteria's worth of college students? Taryn Manning (of Weirdsville [2007/ trailer] and Zombie Apocalypse [2011]), as the second-string female named Cassandra, proves to be the best actor in the movie, but her part gives her little to work with — though she looks hot in her bra when she changes her shirt. Her boyfriend is a boring, waffling emo who should have died — or did he? We really can't remember. And fuck those cheap-scare music cues... 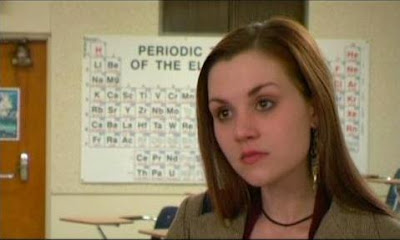 Throughout Cult, one always is left with the feeling that the filmmakers are as lost as the characters and the plot, the last of which concerns, when reduced to a bare bones description, a nasty cult leader out to gain eternal life or unlimited power (both of which he already seems to have, seeing all that he does) and a group a college students that cross his way. A total snooze-a-thon, Cult isn't as anywhere near as bad as the average Christopher Ray film (e.g., Shark Week [2012] or Mega Shark Vs Crocosaurus [USA, 2010]), but it is hardly worth watching and definitely not worth searching out. 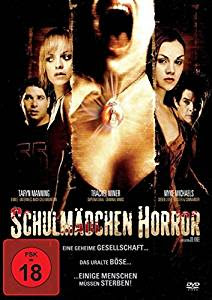