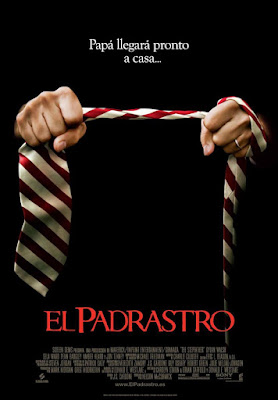 What a poopsicle. In theory, we here at a wasted life have nothing against remakes, or "reboots" or "re-envsionments" or whatever they are wont to be called today. Admittedly, however, we also like them to try to go a totally new direction — as such, though it is a perfectly fine film in its own way, we find The House of Wax (dull trailer), the 3-D 1953 Vincent Price remake of 1933's Mystery of the Wax Museum (trailer), far more superfluous than, say, Jaume Collet-Serra's version from 2005 (trailer), which is pretty much a completely different movie, even if it is in the end not much more than a dead-teenager bodycounter populated by over-aged teens (its overall genericness is primarily redeemed by its setting and some unsettling wax-related gore scenes). Collet-Serra tried to take the basic wax idea someplace else, at least, and wasn't frightened of an R-rating. 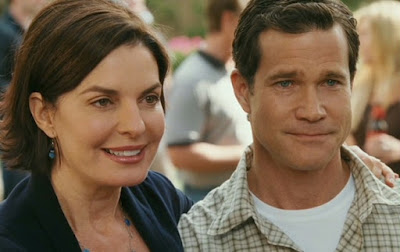 Unlike, on the otherhand, the loser that made this flick here, Nelson McCormick, who basically only changes the brand of salt and pepper to no-name this time around but keeps the recipe pretty much the same, even as he does somersaults to get a PG-13 rating. (Note: we saw the "unrated" director's cut, and it still felt like the ballsack of a castrated cat.)
Trailer to
The Poopsicle (2009):
Joseph Ruben's original Stepfather (1987) is a pretty good, well-acted flick with some nice twists, including one that was probably lifted from The Shining (1980 / trailer) but that also works really well and adds an intriguing "sisters are doing for themselves" aspect uncommon to most horror flicks (especially back in the 80s). Unluckily, the new version jettisons all that made the first flick good and instead goes full generic and dumb. (And the substandard acting doesn't exactly help, either.) 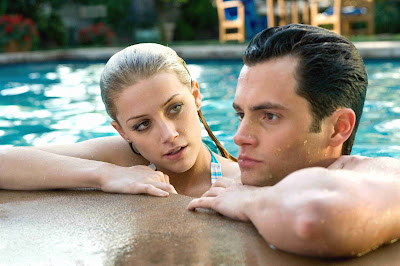 The young, doubting-daughter heroine of the first flick, for example, has been replaced by an oddly dislikable young, untrusting son hero (Penn Badgley), and any possible non-intentional feminist intonations are squashed by the presence of an unneeded girlfriend eye candy, Amber Heard (of All the Guys Love Mandy Lane [2006 / trailer]), who spends most of her time looking droolable in a bikini. The impulsive mom (Sela Ward), already on the edge of believability in the original, is even less of a believable figure in this flick, a woman who doesn't even bother with doing the now-universal internet search common to contemporary dating-and-mating habits and etiquette. The deaths are all PG-13, a rating which not only explains the bikini but also means the movie never really manages to transcend the level of a contemporary pay-TV filler film. As for Stepdaddy (Dylan Walsh of that guilty pleasure known as Congo [1995 / trailer] and Fright Fest [2018 / trailer]), well, maybe the actor wasn't given all that much to work with, but he also doesn't exactly have presence. (But he does seem to have ESP, which is very helpful when you're a murdering psychopath.)

As for the ending, obviously enough the filmmakers were hoping for a hit and thus they wanted to leave the movie open for a sequel (indeed, the original spawned two successively worse films, The Stepfather II: Make Room for Daddy [1989 / trailer] and The Stepfather III: Father's Day [1992 / trailer]), but the manner in which they allow the possibility of a sequel is a groaner — as is most of the movie. But before the final groaner, the hospital-set expository scene, one is faced with a protracted "climactic" segment of running around, non-kills and fighting that lacks creativity, tension, unpredictability, horror or anything that might have made it interesting. And then there is the rooftop fight, the biggest joke of the movie: one literally has to start laughing when Stepdaddy reappears in a way that indicates he can fly like Superduperman.

What a poopsicle. Do yourself a favor, skip this third-rate piece of uninteresting, by-the-number pap and go for the original. Sure that one is over 30 years old and looks and feels a bit dated — as does this one, actually — but unlike the remake it not only doesn't feel like a lazily made pay-TV movie, but also displays thespian and directorial talent and comes across as a decent suspense movie with some unexpected twists that really work. 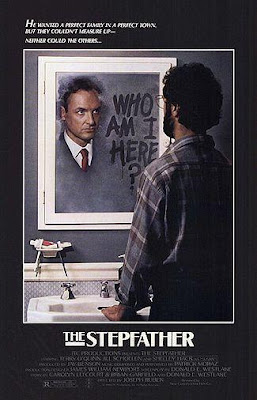