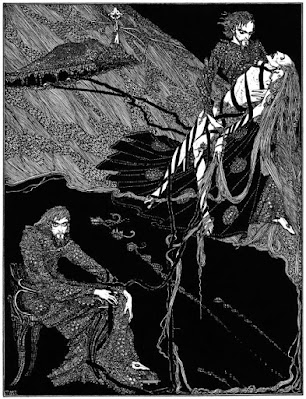 Illustration by Harry Clarke
"Plots? Plots? We don’t need no stinkin' plots!"
(Movies Silently, which doesn't like the film.) 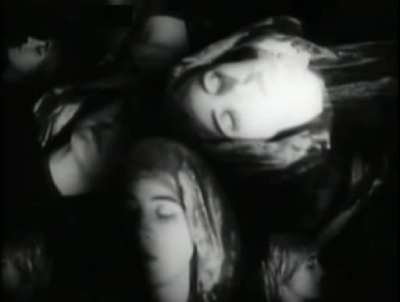 First published in 1839 in Burton's Gentleman's Magazine (1837-40), the original Gothic short story is probably one of Edgar Allen Poe's most famous tales of terror. And like so many of his works of fiction, it has enjoyed the attention of numerous filmmakers* — indeed, not only does the imdb currently claim a new version is in development hell, but just last month we were invited to review a new independent flick inspired by the tale, George Adams' Lady Usher (2020 / trailer).
Interestingly enough, in 1928, just as the Silent Age was putting its first foot into the grave, Poe's tale was adapted for the screen for the first time – in two different countries! The result was a silent feature-length film, and a silent short film, both revealing a shared a bent for experimentation on the part of the directors. 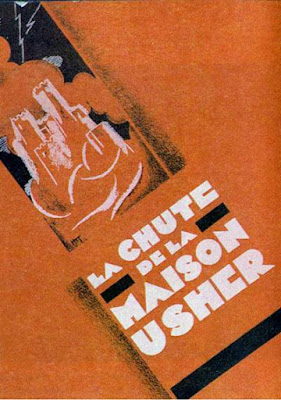 In France, the influential filmmaking film critic Jean Epstein (25 Mar 1897 – 2 Apr 1953), made La chute de la maison Usher (poster above), the film he is perhaps still best-remembered for: co-written by Luis Buñuel — see our Short Film of the Month for February 2016, Un Chien Andalou (1929) — Epstein's version is considered by many to be an early masterpiece of cinema. Online, you can find a full version of the film here.
And back in Edgar Allen Poe's homeland, the (at the time still) United States, the experimental filmmakers James Sibley Watson (10 Aug 1894 – 31 Mar 1982) and Melville Webber (July 1871 – 1947) came up with their directorial debut, the 13-minute short Fall of the House of Usher, which, 72 years later was deemed a "culturally, historically, or aesthetically significant film" by the United States Library of Congress and selected for preservation in the National Film Registry.
"James Sibley Watson, Jr., and Melville Webber, came to filmmaking from diverse, revealing backgrounds. Watson received his medical doctorate in 1923 and published the influential U.S. literary journal The Dial throughout the 1920s. Among frequent contributors to The Dial was poet e.e. cummings, who wrote an early scenario for this film (as well as for Watson's unfinished The Dinner Party [1925]). Webber was an art historian at the University of Rochester, in New York, specializing in medieval frescoes. He designed and painted the striking sets in a barn behind Watson's Rochester home. [National Film Preservation]"
As explained over at Bill's Movie Emporium, this short is "a nightmarish version of the death of a family. It's all too easy for a family to fall when they have lost their handle on reality. The Fall of the House of Usher takes the viewer into the nightmare that the Ushers' are experiencing, all too vividly. There's plenty of experimentation going on in this short film, but it's experimentation with a purpose. The film is constructed like a dream turned nightmare, and the longer the film goes the deeper into the nightmare the viewer is dragged. As far as early avant-garde cinema is concerned, The Fall of the House of Usher is something special."
It should perhaps be noted that the film forgoes some narrative clarity in its pursuit of visual experimentation, so some familiarity with the original tale is a plus when viewing this historic visual treat.
The Fall of the House of Usher (1928):

Of making the film, over at River Campus Library, the co-director, the "American medical doctor, philanthropist, publisher, editor, photographer, and early experimenter in motion pictures" James Sibley Watson explains: "Melville Webber and I started to work on our first entertainment film in the Winter of 1926-27. Melville was scenarist, idea man, scene painter, costume designer, make-up man, director, and also played the part of The Visitor. My part was cranking the camera, lighting the sets and the actors, developing, printing, splicing, and projecting the film. Our preliminary experiments left us with many feet of discards. On the other hand, we had managed to assemble a number of 'properties' that were to be extremely useful when we finally settled down to retelling Poe's story. The 'properties' included a home-made coffin, a cardboard flat painted by Melville to represent the façade of the house of Usher, a short flight of fairly normal steps, and a long flight of steps in miniature. We had also acquired from Scott Sterling, of Bausch & Lomb, prisms and distorting lenses that could be rotated in front of the camera lens. Rotating the latter device causes the subject to appear successively short and wide and then tall and thin, an 'effect' employed to give a sort of rhythm to the scene in which a black-gloved hand smoothes Madeline's burial robe as she lies supine in her coffin. In another scene, The Visitor is reading to Roderick. Here certain key words are emphasized by reflecting the letters in the polished surface of a platter turning on a phonograph turntable, making the syllables ripple. […] All of the effects in Usher had to be done with, or in, the camera. […] Usher was strictly amateur; none of us had had any experience with professional film production, least of all myself. It was only recently that I had become obsessed by the idea of making movies. […] I bought a second-hand Bell & Howell 'studio' camera and a speed movement for it. The standard B&H movement could be adjusted to run two films, and it was in this way that we were able to superimpose a moving horse and rider on a background of moving clouds, the opening scene of our film. Melville, The Visitor, was supposed to be the horseman, but that summer (1928) he was in Paris, and a substitute had to be found for this much-needed outdoor shot. Elizabeth Lasell volunteered to make the ride disguised as The Visitor by a top hat and a cloak improvised from a piece of black cloth. The fact that a woman rider was taking the part of a man was apparently not noticed by anyone who had not been told about it beforehand. […]" 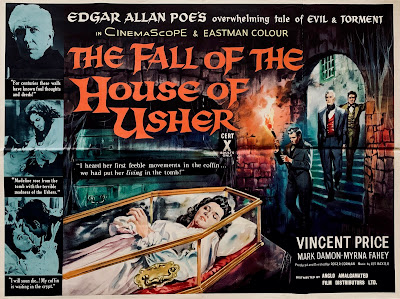 * Feature-length versions famous and forgotten can be found everywhere, the most famous possibly being Roger Corman's first Poe flick, with Vincent Price, House of Usher (1960 / poster above / trailer). But while that version is known and fondly remembered, it is far from the only post-Jean Epstein feature-length interpretation of the tale. Most obscure is surely the 1974 Mexican version from Julián Soler (17 Feb 1907 – 5 May 1977), Satanás de todos los horrores (last 13 minutes), though equally few people probably remember that Ken Russell, during his twilight years, did one of his typically tacky takes on the tale with his obscure horror drollery, The Fall of the Louse of Usher (2002 / song from film). Equally obtuse in its reinterpretation of the tale, if with far less artistic intention, are the forgotten Katherine Heigle flick Descendent (2003 / trailer), produced and supposedly co-directed legendary no-budget trash producer Del Tenney (27 July 1930 – 21 Feb 2013), and the buff and beefcake-heavy but auraless homo-eroticus version by film-fertile David DeCoteau, House of Usher (2008 / trailer). On the more exploitive side, there is of course Aussie Alan Birkinshaw's forgotten The House of Usher (1989 / trailer), which surely had Poe rolling over in laughter in his grave but leaves bad-film lovers happy; Hayley Cloake's The House of Usher (2006 / trailer), which he — like everyone — probably failed to notice; and the great headscratcher of them all, found in multiple cuts and versions, Jess Franco's obscure The Fall of the House of Usher aka Neurosis / Revenge in the House of Usher aka The Crimes of Usher aka (1982 / trailer, with Lina Romay). And lest we forget, a TV take from James L. Conway, The Fall of the House of Usher (1979 / clip); the unknown Ivan Barnett's low budget B&W directorial debut from the Borisland, The Fall of the House of Usher (1948 / full film), and...
As for short-film versions, the tales has also had its interpretations, the newest possibly being the dully animated The Fall of the House of Usher (2013 / trailer), narrated by Christopher Lee, one of the episodes of the 5-tale Poe anthology, Extraordinary Tales (trailer). The great Jan Švankmajer also tackled the tale in 1982, with Zánik domu Usherú (full short film without subtitles), a mood piece of more subdued nature than most of his projects, while the eternally underappreciated Curtis Harrington (17 Sept 1926 – 6 May 2007) made two short versions of the tale: the first, the 8mm Fall of the House of Usher, opened his directorial career in 1942 at the age of 16, while the second, Usher, closed it in 2000; in both films, he took over the roles of both Roderick Usher and Madeline Usher. Lastly, at least in regard to the short films we could find, Guerdon Trueblood, the man behind the legendary exploitation movie The Candy Snatchers (1973 / trailer), directed a very true-to-the-source, 30-minute version for Encyclopaedia Britannica's Short Story Showcase in 1976 (full film).
Posted by Abraham at 1:02:00 PM