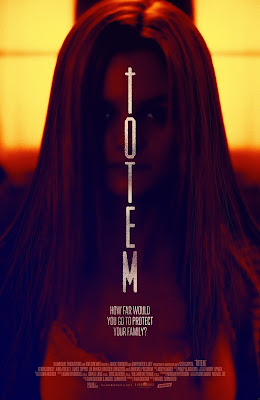 Some years ago, director Marcel Sarmiento directed the disturbingly odd and transgressive, blackly humorous horror flick, Deadgirl (2008 / trailer), which, due to its decidedly exploitation-film elements, arguably upset too many people to ever find a mainstream audience or general popularity. Totem, his first feature-length directorial project since then, is far more standard in its supernatural horror narrative than the zombie sexual horror of Deadgirl, but nevertheless also manages, at the end, to suddenly slip in a quick dash of disturbing sexuality that succeeds in putting the viewer uncomfortably on edge — far more than most of the movie's extremely traditional horror elements that precede the unexpected resolution. Despite being far more accessible on the whole than Deadgirl, Totem pretty much tanked when released and quickly slid into oblivion.
Totem opens with a shock and a splash, though the event shown should probably have been more clearly marked as occurring prior to the rest of the movie. But soon enough the viewer realizes that the opening violent death is that of the mother — and thus a tale unfolds that is hardly new: a few years later, just when daddy James (James Tupper of Beneath Us [2019 / trailer]) decides that the time has come for his artist girlfriend Robin (Ahna O'Reilly of Sleepwalker [2017 / trailer]) to move in and join the family, his decidedly non-chill oldest daughter Kellie (Kerris Dorsey), who has pretty much taken over the maternal role within the family, is suddenly confronted by a seemingly evil presence out to harm the family. Thus family drama meets supernatural horror as Kellie tries to discover the what and the why of the dangers her family now faces.

Whether the inter-familial drama and difficulties resulting from daddy moving on or Kellie's realization and exploration of the sudden appearance of the supernatural threat, the elements of the plot are indeed nothing new. What saves the movie is the convincing acting and surprisingly tightly drawn characters — the latter is particularly noteworthy, for none are really fleshed out enough for them to be as convincing and "real" as they are. True, Kellie's high-school sports background is given some focus, but what dad does other than being daddy (e.g., how he puts bacon on the table, for example) is never broached, and while Robin is said to be an artist and even moves her sculptures into the house, she never seems to be actively creative. They, like the youngest daughter Abby (Lia McHugh of The Lodge [2019 / trailer]), all simply agitate within the setting, coming forward as needed, but are also far more present as people than the sketchiness of their respective part should allow. Ditto with, Kellie's boyfriend Todd (Braeden Lemasters of The Stepfather [2009 / trailer]), who is never anything more than an unnaturally understanding and perfect boyfriend, even if he does now and then assist in advancing the plot (e.g., he is the source that explains exactly what a totem is, and how it could be the source of the supernatural threat). Nevertheless, he like every other stock character of the tale is acted with such conviction that he achieves a presence that makes his final fate all the more tragic — although the movie's twist also makes him obvious fodder in retrospect. 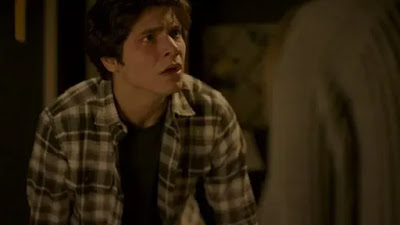 It is arguable whether Totem deserves its ignominiously quick fate of total obscurity, for despite its by-the-numbers plot development, Totem manages to be as surprisingly involving as it is well-acted, far more so than many a far more popular horror movie. Likewise, while most of the shocks and special effects do lean towards the cheap and cheesy, the final money shot(s) don't lack in punch and effective realism, not to mention some cringe-inducing ick-factor moments of icky sexuality. Totem is an entirely watchable movie. 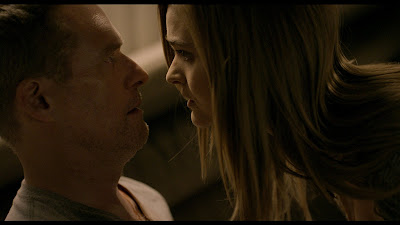 In the end, however, the mainstream mediocrity of the first two-thirds of Totem overshadows the final shocks and the sucker-punch of the unexpected socially transgressive twist so important to the movie's resolution. This, in turn, substantially mitigates the movie's overall effectiveness — especially since that once the twist is revealed, certain prior events (like the fate of the cat) no longer make any sense. Totem may never bore, but despite its ability to hold the viewer's interest and the violence and ick-factor arising in its final moments, on the whole Totem feels more like a surprisingly good pay-TV movie than a feature film. 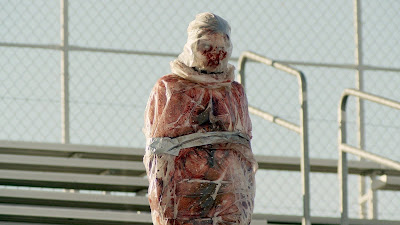