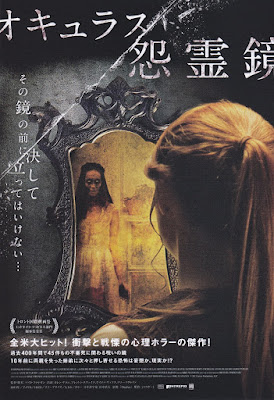 (Spoilers!) The franchise still waiting to happen. Was this thing even a hit? How? Why? With whom? 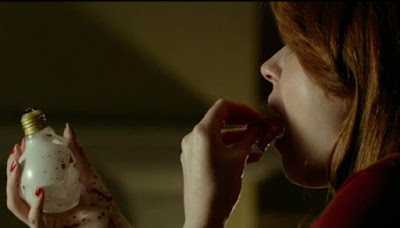 We (a wasted life and the significant other) stumbled upon Oculus on Netfux one rainy Covid-19 lockdown night — Spain, if you did not know, had a lockdown for most of the spring this year — when we couldn't find anything we both really wanted to watch. We knew that the director Mike Flanagan had also directed one of the better home-invasion films around that we never reviewed, Hush (2016 / trailer), so we compromised. But, as is often the case with filmic compromises, we both came away very much with the feeling that we should have simply gone to bed early, or read a book, or taken a bubble bath, or done the dishes, or picked our noses, or played doctor; any other activity probably would have been more satisfying. For all the movie's attempts to mess with your mind and pull the rug out from under you, Oculus is truly a fucking predictable waste of time. (Unluckily, it is also much too well made and dryly serious to be a fun waste of time.)
Trailer to
Oculus:
Which isn't to say that the movie doesn't have a shock or two, or that it isn't structurally interesting — indeed, the way it crossweaves the events of two different timelines together is the flick's only redeeming quality. The problem is that it is way too obvious from the start that the goal of the lead female Kaylie Russell (Karen "Nebula" Gillan), which is to prove to the world that the mirror is evil and her brother innocent of killing their parents a child, is a doomed enterprise and that she is an idiot to even bother trying. Anyone with a brain and/or the inside knowledge the two siblings of the flick had would have simply destroyed, dare we say killed, the mirror the second the chance was had, long before it had the opportunity to let its mind-fucking influence expand, take hold and take over — again. Movies about suicide through stupidity just aren't all that much fun (rather unlike reading about one killing oneself through stupidity). 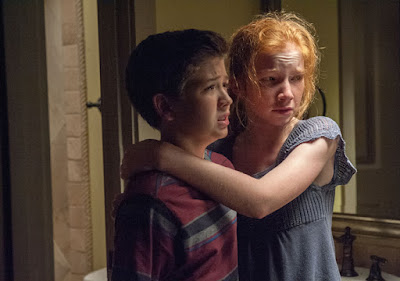 The result is that one quickly realizes that Kaylie and her recently nut-house-released brother Tim (Brenton Thwaites of Ghosts of War [2020 / trailer]) are doomed, that they ain't gonna win the jackpot and they ain't gonna ride off happily ever after: the only question is when, and how, the mirror is gonna get them. And with an outcome as obvious as that, the movie, or at least the narrative of the contemporary timeline, is thus totally lacking in suspense, a fault that no amount of hallucinatory (or maybe real) "shocks" can overcome.

Had Oculus been a short film — which, we've since learned, it once was — and only told the early timeline with the siblings as kids, Oculus would have at least had tension and scares, but the addition of the contemporary timeline only weakens the terror and the film, resulting in a movie that screams "Sequel! Sequel!" and "Franchise! Franchise!" louder than Trump farts lies through his mouth. 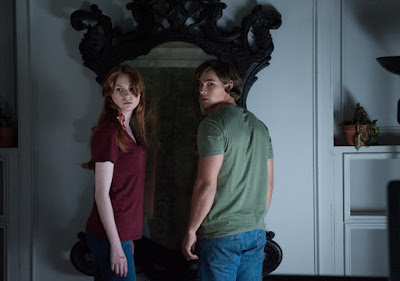 For all that, to date there has been no sequel and no franchise, although the movie did get the typical Bollywood treatment a few years later: Dobaara: See Your Evil (2017 / trailer). Dunno if that version is any good, but when it comes to the original Oculus, though director Flanagan's flick may have a great trailer, the movie itself is not worth bothering with. Do something else instead — like playing doctor: according to statistics, if you're "young" you aren't doing it all that much nowadays anyways.