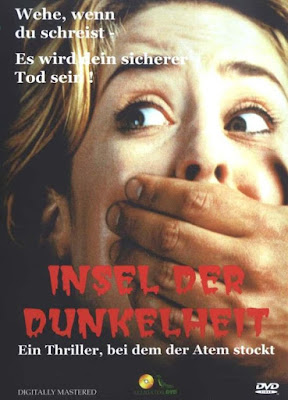 If there's one thing all city slickers should know, it's that the rural backlands are dangerous. We've seen the proof of that in hundreds, if not thousands, of movies. Whether in the Appalachians, as in Deliverance (1972 / trailer), Tasmania, as in Dying Breed  (2008), the Outback of Australia, as in Wolf Creek (2008 / trailer), the backwaters of Ireland, as in Plague Town (2008), the scrubby hills of rural California, as in Necromancy aka The Witching (1972), or on some obscure island somewhere, as in either version of The Wicker Man (1973 / trailer and 2006 / trailer), those picturesque rural hamlets are all pretence, and the inhabitants are out for... something unpleasant. (And if the villagers pray and sing and are oh-so-pious — you know, Republican-like — well, it's your own fault if you stick around.) 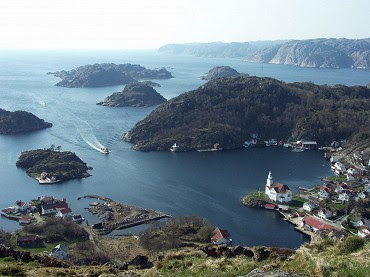 It would seem that the distant, outlying but inhabited islands of Norway are no different than the rest of the world, if only a little bit less gratuitously bloody. But it would also seem that Julie (Sofie Gråbøl of  The House That Jack Built [2018 / trailer], Alien Teacher [2007 / German trailer], and the original Nightwatch [1994 / trailer]), the Danish heroine of this totally obscure, flawed but surprisingly intriguing and effective slow-burn horror thriller, has never seen a movie like those previously mentioned because she does what no person (much less a single woman) should do: moves, all by her female lonesome, to become a teacher at some remote fishing village somewhere deep within the beautiful fjords of Norway populated by fine if extremely reserved, God-fearing people. 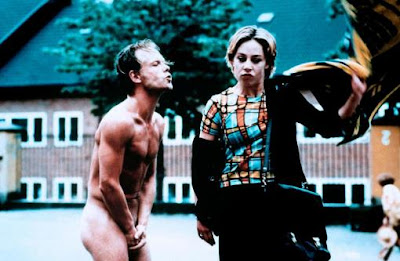 But then, unlike her the viewer already knows that those fine people aren't quite as traditionally upstanding as one might think: the viewer has the advantage of an opening scene of suicide/murder in a church bell tower to the singing of the town choir. But what first appears to be the lead-in for some Harvest Home (1978 / trailer) scenario soon reveals itself to be far less supernatural-based, if not downright anti-church and/or anti-blind faith, and liberally sprinkled with an aftertaste of anti-patriarchy. (Unluckily, much as in real life, patriarchy cannot be stopped.) 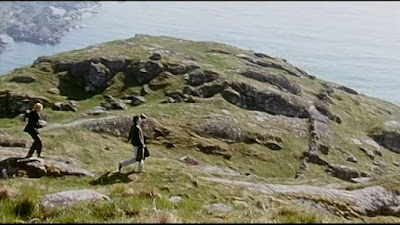 How Julie ends up in that picturesque village is, perhaps, the stuff of TV movies — which this movie could possibly be, despite the limited but often unpleasant nudity and sex and violence, including some narratively necessary but nevertheless repellent rape scenes. (Seriously: if for whatever reason you cannot deal with rape scenes, skip this movie.) 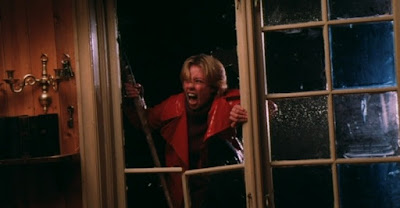 But back to how the Danish school teacher Julie ends up in the boonies. Basically, within the course of an afternoon she loses her job as a teacher, catches her boyfriend screwing her coworker gal-pal and, if that weren't degrading enough, that same night she gets turned down by the handsome but gay bartender while drowning her sorrows at some Copenhagen bar. Since work for teachers is so plentiful in Scandinavia, however, she decides to pin the "Teacher Wanted" classifieds to the wall and take the first job that her tossed dart hits — even if it's in Buttfuck, Nowhere (or Norway, as the case may be). 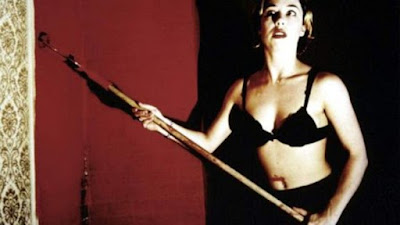 In all truth, the whole pre-isolated island sequence is rather lame, and features some pretty bad acting, but once Julie is on the ferry gliding through the fabulous fjords, the movie gets a lot better and, over the course of events, delivers more than one sucker punch. That said, it also somewhat episodic and slow, with some wonderfully atrocious 90s fashion and style — were any rooms outside of bars and bordellos really painted red back then? — but by the time the movie reaches its moebius strip ending, all is forgiven. (Including the fact that a woman in a coma for around nine months wakes up in makeup and as full-figured as she was when she lost consciousness.) 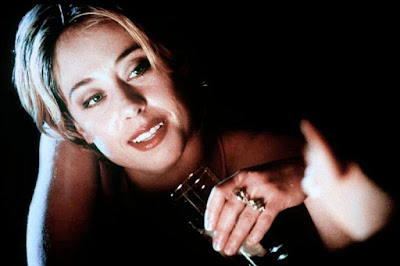 Actually, as soon as Julie lands in town, sticking out like a sore thumb on a hand with no fingers, there are multiple points where one can only wonder why she doesn't just pack up and leave (especially considering the Scandinavian job market for teachers). But there is her sense of duty as a teacher, all the more awoken by the young teen Solveig (Sina Langfeldt), a girl with budding breasts trapped in an unhappy family situation and chronically mobbed by all her classmates. It is through her that Julie learns that the truth behind some local tragedies — including the suicides of two of Solveig's friends — is something else than the prevailing stories told. Likewise, her itch for the charismatic local pastor, Roald (an effective Paul-Ottar Haga), makes her think twice about leaving, but like that of so many women her choice in men is not praiseworthy. In the end she stays in hope of somehow saving Solveig from the town of religious hypocrites that blindly follow a man with a narcissistic personality disorder surely equal to that of Fjotolf Hansen, nee Anders Behring Breivik — only to make the clasic mistake of not swinging her shovel a third or fourth time (a mistake common to so many horror movies, even after Scream [1996 / trailer]).
Title track to the movie —
Seigmen's Mørkets øy:
Much of the first half of the movie is mostly false scares and unseen threats: Julie faces dangers that prove unfounded (like the ax-wielding town idiot), or is forever unaware that she is not alone in her house. But come the big feel-good scene, in which Julie and Solveig finally bond as only gals can, the veneer begins to fade and the tragic horror and tension begins to increase. The horror of the movie reveals itself as not that of the typical body-counter or slasher, and the bodies — despite the opening scene and known prior deaths — do not exactly fall in great number. The horror of Mørkets øy is far more psychological and sexual, with the focus being far more on the abuse of patriarchal and religious power, the reduction of women (of any age) to sexual objects meant for domination and procreation, and the innate evil of blind faith and obedience. And, lastly, that smiling faces sometimes lie. 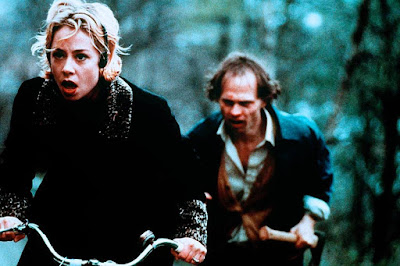 We caught the German release of this movie film, entitled Insel der Dunkelheit by chance: it simply lay at the top of our DVD pile. Once upon a time it was also available in English, either as Isle of Darkness or Island of Darkness. Again, Isle of Darkness is far from a perfect movie, but if you like suspenseful European slow burners, it is worth a gander if you stumble upon it. 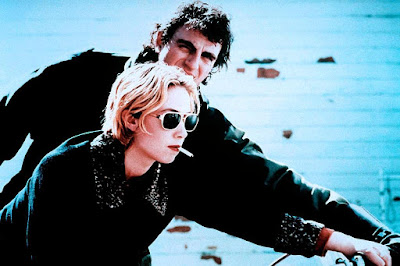 As for us, Mørkets øy surprised us enough that we're seriously thinking about taking a look, someday, at director Trygve Allister Diesen's subsequent, and surely equally depressing, tale of American country life and social intercourse, Red (2008 / trailer).
Used somewhere in the movie —
Mono's Life in Mono:
Posted by Abraham at 11:32:00 AM