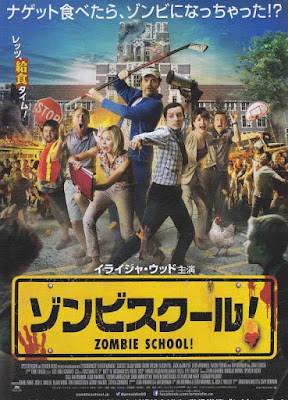 (Spoilers.) Kill-the-kids time… laughing all the way. Perfect for the Coronavirus season, an independent "zomcom" about a pandemic of cooties that turns kids into (intelligent), adult-eating killers. Something similar was done in the British horror movie The Children back in 2008 (trailer), minus the cannibalistic aspect and on a more-local scale, but whereas that film was depressingly full-on serious horror, Cooties goes for the laughs even as it ladles out the gore and guts and kiddie violence. And while it is a far from perfect film, it is a movie that keeps you laughing and that hardly deserved its fate of flopping and falling off the face of the earth. But then, killing kids has always been a dicey topic, on screen or off, and laughing about it probably more so.
Trailer to
Cooties:

Cooties is one of the early films produced by Elijah Wood's Spectrevision production company, a company that has to date released a diverse selection of art-house or genre-bending horror like A Girl Walks Home Alone at Night (2014 / trailer), The Greasy Strangler (2016 / trailer) and Color Out of Space (2019 / trailer) — films one and all that reveal a production company that aims to do stuff differently. Or at least a little bit outside the box — though we would argue films like The Greasy Strangler never even ever saw a box. 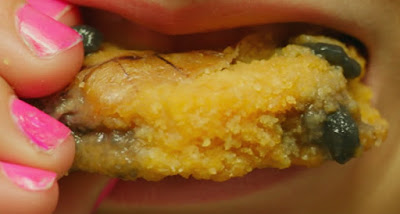 Cooties has seen a box; many boxes, probably, and takes a lot of the familiar to come up with its funny little narrative, but it speaks loudly that little if anything (until the grand final) feels old or overused or forced. In part, it is the literalness and dryness with which everything is handled that saves the film: no matter how stupid the event, how ridiculous the verbal exchange, how sitcom-like things develop, everything is delivered with a straight face. This, in turn, makes everything twice as funny, even when in theory it probably shouldn't be. 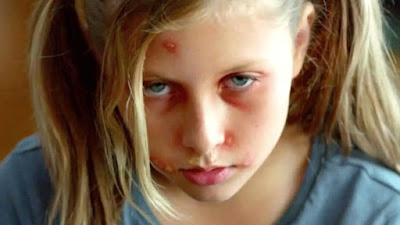 Cooties opens by revealing the source of the virus, which later is christened "cooties", after that invisible imaginary childhood disease all American kids dread catching or having. Modified bird flu, you might say: we watch the detailed, laughably grotesque creation of chicken nuggets from the harvest to delivery, and then the little girl, Shelley (Sunny May Allison of Ouija [2014 / trailer]), that eats an infected one. (The timeline of the film is a bit dodgy, to say the least, as she eats her nuggets in the school lunchroom before the actual day has even begun… it is doubtful, after all, that she ate them the day before because the virus is later shown to spread, infect and turn virtually on contact.)

And thus cooties reach Fort Chicken Elementary, where Frodo, now a wannabe horror writer named Clint Hadson (Elijah Wood of Sin City [2005 / trailer], The Faculty [1998 / trailer], Maniac [2012 / trailer], The Good Son [1993 / trailer]), has his first day as a substitute teacher. A school filled with brats, going by his walk from his car to classroom, and neurotically normal teachers, one of which is his former high-school crush, Lucy McCormick (Alison Pill of Scott Pilgrim vs. the World [2010 / trailer]), and another her current boyfriend, the dicky PE teacher Wade (Rainn Wilson of The Meg [2018 / trailer], House of 1000 Corpses [2002]). Social distancing, in any event, wouldn't have helped anyway: before the end of playtime, the motley crew of bickering teachers has to face off with a school full of murderous whippersnappers. 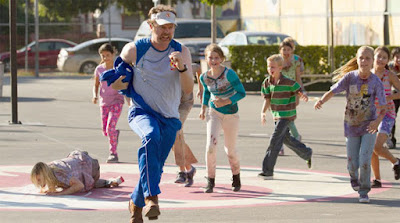 Most of the events that follow are hardly new for fans of zombie films or shows, but instead of being played out with dank and dull seriousness or for pure visceral gore, Cooties goes for the laughs even as the tension and danger (usually) remain real. Not very realistic, on the other hand*: how many schools have a socially stunted but scientifically minded (and dryly funny) teacher like Doug Davis (co-scripter Leigh Whannell, of Dying Breed [2008] and Saw [2004 / trailer]) at hand to explain everything as it develops? In the shortest of order, he realizes that puberty brings immunity to the virus and that the kids are brain-dead — thus, obliquely, making it okay to kill the kids, should one have to. The real goal of the teachers, however, is simply to survive and escape — something impossible without a little hand-to-hand combat with improvised weapons.
* Although, in all truth: when you're talking zombie horror (if not most "creature" horror in general), can one really complain about something not being "realistic"? 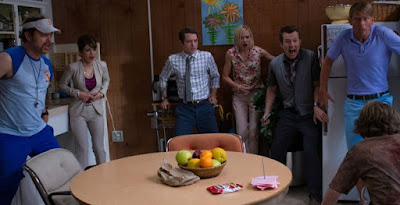 Cooties is not light on laughs, many of which are not even horror-related. The quirks of the pre-cootie kids and teachers and even Frodo's Clint's home life offers some good chuckles, as do numerous lines said in passing, some of which you hardly even catch. (Just as the defensive attack begins —Tracy [Jack McBrayer]: "I'm gay!" Rebekkah [Nasim Pedrad]: "I knew it!") But even for all its laughs, Cooties also serves up a scene or two of true tension, particularly when Clint and Lucy enter the air vents to get some candy when the uninfected kid Calvin (Armani Jackson of The Last Witch Hunter [2015 / trailer], also with Frodo) goes into diabetic shock. And when it comes to gore, most of it is practical and not for the squeamish; for that, it's almost always used in a way that gets at least a nervous laugh, if not a group-wide "Eeeeeeee" (assuming you watch the film, as we did, with a group of people). The film, in other words, is a lot of bloody fun! 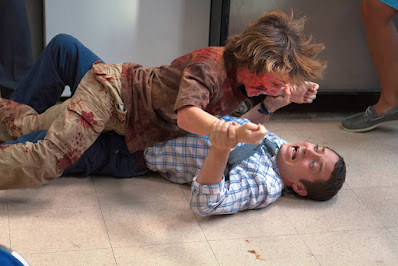 Which isn't to say that Cooties doesn't have some glaring narrative and structural flaws. Aside for the previously mentioned indistinct timeline of the occurrences, for example, the movie is extremely recalcitrant about losing its teachers once the cootie kids kill the minor characters like the vice principle (co-scriptwriter Ian Brennan), his secretary, the nurse, Sheriff Dave (Matt Jones of Red State [2011 / trailer]) and a teacher so negligible in presence that when she gets killed, if we remember correctly, the other teachers ask "Who was that?" And for being brain-dead, the cootie kids are often amazingly designing in their actions — runners, not shufflers, they know how to open doors, hide in wait and, early on, consciously spread the virus.

As for the uninfected kids Calvin and Tamra (Morgan Lily of X-Men: First Class [2011 / trailer]), once they have served their singular purpose — Calvin, to give reason to danger; Tamra, as proof that the virus infects only the pre-pubescent — they pretty much get completely forgotten and shoved in the background to the point of invisibility. And the final big set piece is oddly bombastic for the film that preceded it, as if tacked on to help the film go out with a bang. Indeed, we learned later that the ending is a re-shoot, the original ending as described online probably being found way too much of a downer for the powers-that-be. (In that sense, the ending is the polar opposite of the much older but equally unknown and funny horror comedy, Idle Hands [1999], where the bombast got junked for something a bit less pyrokinetic.) But one is hard pressed to say that the open ending, perhaps up there with The Birds (1963 / trailer) as one totally lacking resolution, is really all that satisfying — although, had the film been the hit that it should've been but was not, it would've easily allowed a sequel, if not a TV series. 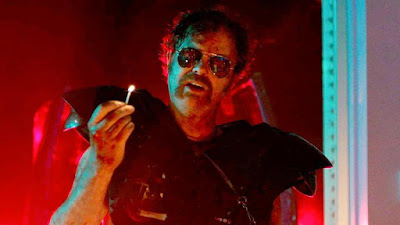 Complaints aside, however: Cooties is bloody and funny zomcom that should appeal both to fans of both genres. It really should've been a lot more successful than it was, and truly deserves rediscovery. It is a perfect pandemic movie for a lockdown night of blood and laughter.
Posted by Abraham at 12:47:00 PM