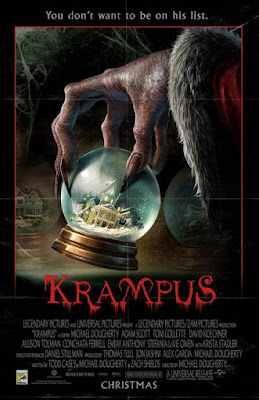 A fun Christmas film for the whole family. Opening with a slow-mo shopping scene that humorously reflects the true capitalist nature of the holiday, the black humor infusing much of the first third of the movie lessens a bit after Beth (Stefania LaVie Owen of The Beach Bum [2019 / trailer]), the "nice" daughter of the middle-class half of the disharmonious extended family, meets her fate off-screen with a scream. Thereafter, the laughs might be rarer but for that the bodycount increases. Indeed, Krampus proves himself an equal-opportunity anti-Christmas demon, as happy to take Democrats as Republicans — not to mention a few innocent souls that have nothing to do with the family whose unhappy son, Max (Emjay Anthony of Incarnate [2016 / trailer]), accidentally calls up the anti-Santa: aside from Beth's boyfriend and his family, other known unrelated (off-screen) fatalities include a package delivery guy and a snowplow driver. More notable: unlike in most films, even babies aren't safe in Krampus — but then, why should they be?
The focus of the film, however, is on the Engels & Last-Name-Never-Given families, two groups tied by respective the mothers/sisters (the always excellent Toni Colette as upper middle class mom Sarah and the highly promising Allison Tolman as deplorable way lower middle class mom Linda), that probably never gather but for every Christmas or Thanksgiving and afterwards always wonder "Why?" (In other words, families like yours and ours.) The question is less will they or won't they survive the night than who goes next, but when you're fighting a powerful creature with numerous nasty henchmen — demon toys and killer gingerbread men and monster elves — what else is to be expected? 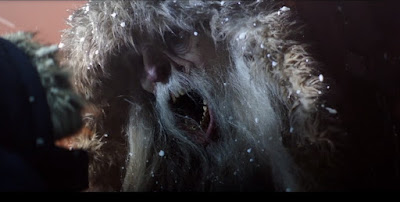 The tale has some flaws and holes to it, ranging from small to large, but they're easy to overlook once the big bad snowstorm hits town and the rest of the world seems to disappear. (The tiniest quibble we had is the bonding scene between the two sisters, where there is an exchange about an X-mass tree ornament that would hardly be a surprise for Linda if the families get together every year. Thus the scene, for all its bonding intentions, felt hollow.) As in all bodycounters,  characters tend to do a lot of stupid things considering the threat they face, and Krampus's reach is oddly expansive for him to remain so unknown to the world of the movie (especially if he harvests everyone, and not just those who accidentally "call" him). But then, the flick does play in a world where there is no such thing as Santa but a such thing as an anti-Santa… 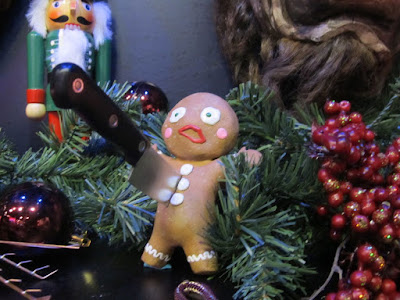 Krampus is never truly scary, and hardly all that bloody, but the body count is large and the harvest continuous. There are scenes that give you a mild scare or make you jump, not to mention a decent laugh or more along the way, and the movie in no way looks cheaply made nor is it badly acted. Indeed, one actually begins to identify with many of the characters, including those one normally might not. (Each kid that died, though, was a death to cheer.) And the mid-film flashback done in the style of a stop-motion film is an unexpected visual treat, not to mention a nice way to work in an explanation of who or what Krampus is (he is, after all, a legendary creature that never made it stateside and that has only relatively recently reemerged in Europe). It is also the first American film we have seen in a long time to have a real German-speaking person (speaking real German) playing a character of German decent (Krista Stadler as Omi Engel), which is a plus point in our book. 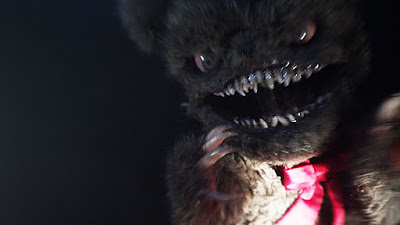 On the whole, Krampus is a worthy successor to director Michael Dougherty's other holiday horror film, the unjustly unknown directorial debut, Trick 'R Treat (2008), which nevertheless is definitely also the better movie of the two. Gorehounds and trash aficiandos will probably come away a bit less than satisfied with Krampus, but anyone looking for a well-made and entertaining Christmas horror film that doesn't drag or overstay its welcome and only falls mildly apart at the end — where we the only ones to be reminded of the ending of the original Nightmare on Elm Street (1984 / trailer)? — will find Krampus the perfect movie to screen after the annual viewing of It's A Wonderful Life (1946 / trailer). 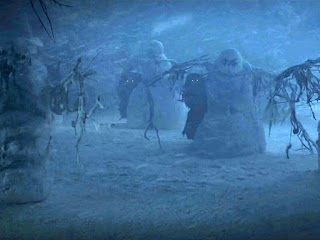