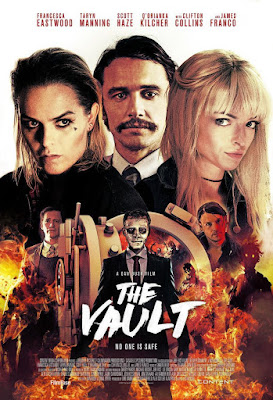 A pulpy, functionally engaging movie, The Vault is an odd mélange that sort of works and meanders interestingly from its effective opening credits to its mildly satisfying Twilight Zone revelation towards the end but, with the subsequent final and totally unnecessary generic "shock" epilogue ending, makes you want to kick in your TV screen. Up until then, however, the at-times effective, at-times clumsily structured crossbreed offers an engaging evening of crime cum horror.
Trailer to
The Vault:
The acting, like the movie's narrative, is a bit uneven, but Taryn Manning (of Zombie Apocalypse [2011] and Cult [2007]) excels as Vee Dillon, the jumpy, possibly itchy-armed sister of the trio of siblings of the 5-person team of robbers that chooses the wrong bank to rob, James Franco sort of sleepwalks through his role as a bank manager who is more than he appears to be, and Q'orianka Kilcher (of Color Our of Space [2019 / trailer]) is surprisingly effective as head teller Susan, a tertiary but nevertheless visible part that offers her the opportunity to believably display a variety of emotions. Possibly the weakest aspect of the film, barring the all the illogicalities that keep the narrative flowing – you definitely will enjoy the movie more if you don't think about stuff like logic and proportion, both of which are sloppy dead in the movie – is the film's lead actress, Francesca Eastwood (of M.F.A. [2017 / trailer]) as Leah Dillon, the nominal non-leader of the robbery gang, who is undoubtedly an attractive person but always sort of comes across like a living, breathing and usually pissed-off Barbie doll, even after she takes off her blonde wig.

As mentioned, The Vault is a tale of a troop of five who stage a relatively well-organized bank robbery – they got the right weapons, they got all the right tools for any eventuality (including drilling a vault open), they got the right outfits, they cause the right distraction – but simply choose the wrong bank: the one they choose, reputed to be haunted we learn early on when the bank manager explains why they have problems keeping tellers, has very little money in its main vault. And just as tensions are about to flair and people are about to get hurt, bank employee Ed Maas (Franco) reveals that the real money is in the basement vault and, against the promise that "no one gets hurt", helps the robbery proceed…

Of course, there is more in The Vault than money and once it is open, the shit hits the fan – not just the supernatural shit, but the cops also surround the bank because of call from the inside, a call that keeps repeating itself over the course of the movie. And so the tension mounts: on the one side, the tension of traditional robbery-gone-wrong-and-we-got-hostages movie, and on the other, the tension of supernatural entities appearing and disappearing and bad guys dying. Of course, only the two most expendable robbers fall [bloody] victim to the supernatural — oddly quickly, actually — while the trio of siblings, on the other hand, are continually confronted with side-line supernatural or heist-movie scares up until the main climax of the narrative. (After all, were they, too, to die as quickly as the characters what's-his-face [Keith Loneker (21 June 1971 – 22 June 2017)] and what's-his-name [Michael Milford], there wouldn't have been much of a movie.) 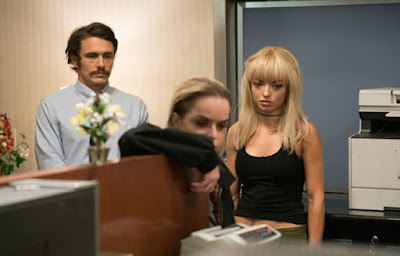 For all its flaws, The Vault does offer a diverting and engaging evening of visual entertainment, and that all the more successfully on its obviously tight budget than, say, the average Michael Bay movie. But like most of the latter's big-budget extravaganzas, The Vault doesn't stay remembered all that long. Still, if The Vault's filming budget truly was only $5,000,000, the money was much better spent on this film than the $217 million spent on Bay's 2017 project, Transformers: The Last Knight or, for that matter, that movie's TP budget.
Posted by Abraham at 11:14:00 AM