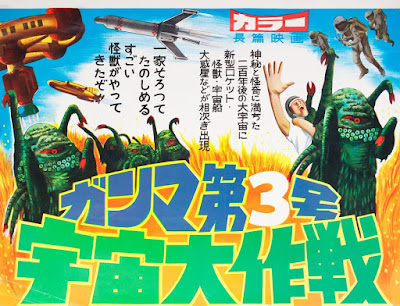 One of those films that more people have heard of than seen, this MGM production was directed in Japan by Kinji Fukasaku (3 July 1930 – 12 January 2003), a productive and for the most part respected director who ended his career with the cult fav Battle Royal (2000 / trailer), "a cultural phenomenon […] considered one of the most influential films in recent decades". A far cry from The Green Slime, in any event, which was one of four films Fukasaku directed in 1968, the best of which is arguably the wonderfully campy Black Lizard (1968 / full film), famous for featuring "Everyone’s Favorite Homofascist", the hunky Japanese nationalist novelist Yukio Mishima (below), as a human statute. 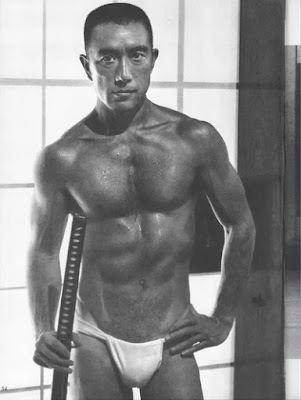 The Green Slime is a tender tale of man-eating, one-eyed, electricity-shooting, rapidly reproducing tentacled monster who hitches a ride from an asteroid to a space station where it reproduces and kills (6 people in total) and the end of mankind in nigh…. The love triangle involves the three leads (below), Commander Jack Rankin (TV hunk Robert Horton, 29 July 1924 – 9 Mar 2016), Commander Vince Elliott (Richard Jaeckel, 10 Oct 1926 – 14 June 1997, of William Girdler's trash anti-classics Grizzly [1976 / trailer] and Day of the Animal [1977], not to mention Mr. No Legs [1978 / trailer], Blood Song [1982 / full movie] and so much more) and Dr. Lisa Benson (Luciana Paluzzi of Jess Franco's 99 Women [1969 / trailer], with Maria Rohm & Herbert Lom, Umberto Lenzi's Manhunt in the City [1975] and so much more).

The functional, by-the-numbers script was written by, among others, Bill Finger (8 Feb 1914 – 18 Jan 1974), a man now considered co-creator of Batman (see the documentary Batman & Bill [2017 / trailer]), and also the man who wrote the turkey Track of the Moon Beast (1976 / full movie / Frank Larrabee's California Lady).
But we are here for the music. And here it is –
The Green Slime Theme Song:
Great song, it was used only for the 90-minute cut of the film, the one used outside of Asia. The Japanese cut, a tight 70-odd-minute affair that jettisons the love triangle subplot, uses a military march. Charles Fox and Toshiaki Tsushima (22 May 1936 – 25 Nov 2013) are generally credited as behind the film's score, but it is also generally accepted that they had nothing to do with the song at hand. The promo single released by MGM has the song credited to Sherry Gaden and arranged by Richard Delvy (20 Apr 1942 – 6 Feb 2010). Delvy might be remembered by some as one of the founding forces of Surfer music: as a drummer, he began his career in music with The Bel-Airs (listen to 1961's Mr. Moto) and The Challengers (listen to 1962's Surfbeat). "Sherry Gaden", however, is a pseudonym for a musician named Ed Fournier, who also worked with The Challengers and later did songs and music for Saturday morning cartoons. The most recent activity of his that we could locate is/was the group Eddie and the All-Star Band, which included former members of The Challengers, like Randy Nauert (1 Jan 1945 – 7 Feb 2019), who plays the sitar on The Green Slime Theme Song. Nauert, in his widely circulated statement online about the song, says that Rick Lancelot a.k.a Ricky Lancelloti (25 Aug 1944 – 7 Apr 1980), who sang leads for the Banana Splits as well as for Zappa, did the vocals. The theremin is played by former Glen Miller Orchestra bandmate Paul Tanner (15 Oct 1917 – 5 Feb 2013). 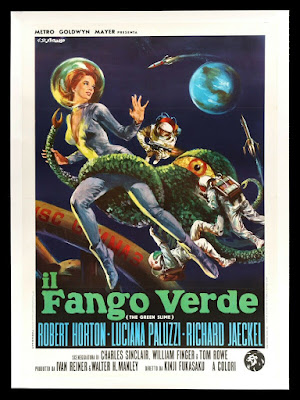 So after that history lesson, let us here at a wasted life share a discovery we made while researching the theme song to The Green Slime (trailer). Over at YouTube, Ed Fournier uploaded an album he made years ago as the music group Unkldrt (a name, we assume, derived from the nonexistent German word "unkleidert", in past tense, which would probably mean something like stripped or unclothed). Entitled NC-17, the LP features such fine titles as Long as I Got a Face You Have a Place to Sit, Shave the Bush, I'm a Lesbian Trapped in a Man's Body and U Get the Ugly One. It will surely appeal to the pubescent humor in all of us, and is just waiting for discovery. ("Rediscovery" doesn't apply here as no one ever knew about it in the first place.)
Complete album –
Unkldrt – NC-17:
Posted by Abraham at 5:22:00 PM