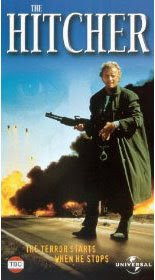 Without a doubt the existentialist classic of the 80s. The Hitcher (trailer) hasn't gotten any better with age simply because it was already good enough to begin with, and still outshines most thrillers made today—and remains a million miles better than the remake regurgitated in 2007 (trailer). Scriptwriter Eric Red shot an impressive wad here with his first script, and though he has had as good and sticky spurt since then, his load has never been as satisfyingly large. Unlike his later scripts for such films as Near Dark (1987/trailer) and Bad Moon (1996/trailer), The Hitcher satisfies until the very end. (Red, by the way, was the subject to some press in May 2000 for flipping out and driving his jeep Cherokee into a Los Angeles pool hall, killing two. Eventually his action got written off as a "syncope episode". The website Hollywood, Interrupted offers a quick review of the details.)

About three minutes into The Hitcher, Jim Halsey (C. Thomas Howell) stops to give a lift to a stranger at the side of the road, saying "My mother told me never to do this" as he opens the door for John Ryder (Rutgar Hauer). Three minutes later he learns his mother was right, and he pays for his stupidity for the rest of the film. 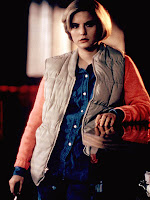 Inspired equally in part by such films as Duel (1971/trailer) and The Night of the Hunter (1955/trailer) and heavily flavored with the taste of The Twilight Zone gone bloody, The Hitcher takes the viewer on a hellish tour across the Southwest with Jim as his world is systematically ripped to pieces. Ryder, forever a step ahead or alongside Jim, destroys both Jim's life and his view of life, leaving a bloody trail of dead bodies along the way, with all evidence pointing to Jim as being the guilty person. Who Ryder is and why he does what he does is never completely clear. He is less a psychopath than an almost supernatural being that has either decided to make Jim pay for escaping the first time around or sees in him a possible tool for his own self-destruction, similar to the situation narrated in the artsy-fartsy horror flick Dust Devil (1992/trailer). The latter concept is reinforced by the film's final 10 minutes, when it becomes apparent that the only person able to stop Ryder is Jim himself, providing he is willing (like Ryder) to step over the line of civilized behavior. 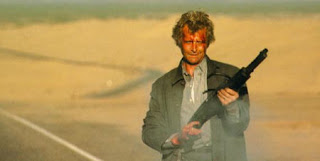 Hauer is perfectly cast as John Ryder, proving as he has in so many a forgotten or ignored film that he is indeed a good actor. A young Jennifer Jason Leigh appears as Nash, the only person willing to help Jim during his odyssey, something that she ends up paying for in a most terrible way. Director Robert Harmon never again managed to make a film of similar impact and eventually, after making a bearable Jean-Claude Van Damme movie—Nowhere to Run (1993/trailer)—has spent most of his time making painfully dull television movies. The weakest link in the movie is actually C. Thomas Howell, who simply lacks charisma in the movie and occasionally verges on being wooden. Indeed, unlike with Hauer, it is easy to understand why Howell has remained in B & C-movie hell. Luckily, the movie itself is so strong that his faults as an actor are easily overlooked.

Of course, most of the copies shown on late night television lack some of the best scenes, like the grizzly one with a thirsty German shepherd, but even with the bloodiest scenes cut out, the film still shocks and scares. But a viewing of an uncut version uninterrupted by commercials returns that feeling of existential dread to the events that gets lost due to the commercial breaks. A definite must-see—unlike the sequel The Hitcher II: I've Been Watching You (2003/trailer), in which Howell gets upstaged by Kari Wuhrer, of all people.

This is my ultimate fav movie and Rutger Hauer my fav actor, he was so good, charismatic, unique, handsome, and mysterious yet his star never rose high enough. Hollywood is so stupid, making stars of Tom Cruise et. al yet overlooking the immensely talented Mr Hauer! Everything Hauer acts in, he does it so well.