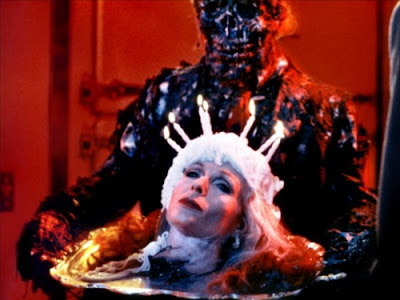 As of today, we've wasted ten years of our life on this blog, the first review of which — for an amazingly fun and badly made and bloody Thai movie entitled Devil Species (2004), trailer below — we uploaded on Thursday, September 20, 2007. A decade later, we're still wasting our life. And you?

"A mistake of experiment may transform human into devil species."
Trailer to
Devil Species (2004):

And in honor of our tenth birthday, we thought we might take a look at some birthday horrors, thrillers, fun stuff — but only those that actually have the word "Birthday" in their titles. Know of any we missed? 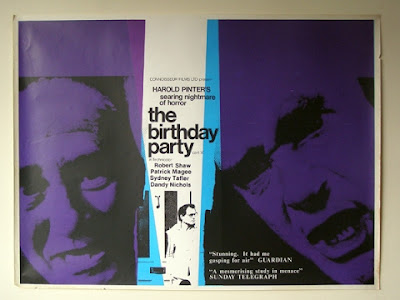 William Friedkin's next project after Good Times (1967), moving forward from Sonny & Cher and "comedy" to playwright Harold Pinter and mysterious drama. "The movie, like the play, forces us to accept a horror story that has no reasonable antecedents: Stanley (Robert Shaw) is the only guest at a rundown, seaside boarding house owned by Meg (Dandy Nichols) and Petey (Moultrie Kelsall). Into their lives of placid desperation come two strangers, Goldberg (Sydney Tafler), tackily urbane and garrulous, and McCann (Pattrick Magee), a faithful goon. They have been sent by someone named Monty and "the organization" to retrieve Stanley." (DVD Beaver)
Scene: 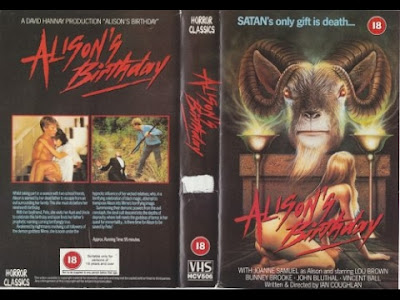 "A young woman (Joanne Samuel) is called home for a special party for her nineteenth birthday, an event which she'd been thinking of avoiding due to a message from a séance she'd received years earlier. She heads home with her boyfriend (Lou Brown), but finds that something sinister is going on…." (Fantastic Movie Musings)
Trivia: Joanne Samuel played Max's wife in Mad Max (1979 / trailer): it's her death and that of their baby that makes him mad.
Full movie: 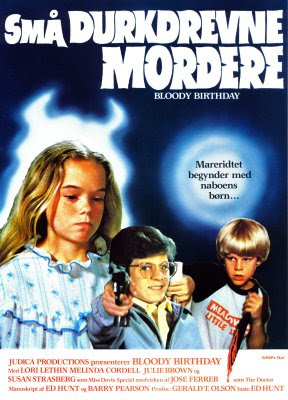 Ed Hunt is a rather under-appreciated trash filmmaker of the past whose limited output is both fun and unjustly overlooked. He is best known for the cheesy science fiction non-classic Starship Invasions (1977 / trailer), featuring Christopher Lee [27 May 1922 – 7 June 2015] and Robert Vaughn [22 Nov 1932 – 11 Nov 2016]. This film is one of his best, and is of the killer-kids sub-genre.
"In a 1970's Midwest suburban neighborhood three infants are born during a spectacular total eclipse. During the event the sun and the moon are blocking the planet Saturn which is said to control human emotions. This apparent lack of remorse and compassion manifests itself shortly before the children's 10th birthday when the trio of pint-sized terrors Debbie (Elizabeth Hoy), Curtis (Billy Jacoby), and Steven (Andy Freeman) unleash a string of murders in their suburban neighborhood underneath the noses of the adults." (McBastard's Mausoleum)
Trailer: 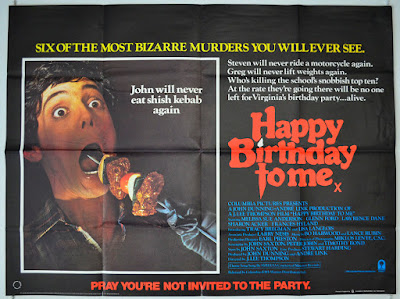 The classic of the list, from the director of the original version of Cape Fear (1962 / trailer), What A Way to Go (1964 / trailer), The White Buffalo (1977 / trailer) and many fun flicks of varying respectability. This is not his only horror movie, but it is his only slasher.
"At the Crawford Academy, Virginia Wainwright (Melissa Sue Anderson) belongs to the social clique known as The Top Ten. The members of the Top Ten then start being killed off in bizarre ways. As Virginia's birthday approaches, she comes to believe that the identity of the killer may be linked with her own shadowy past, something to do with the accident that killed her mother on a previous birthday and left Virginia with brain damage and memory lapses about what happened." (The Science Fiction, Horror and Fantasy Film Review)
Trailer: 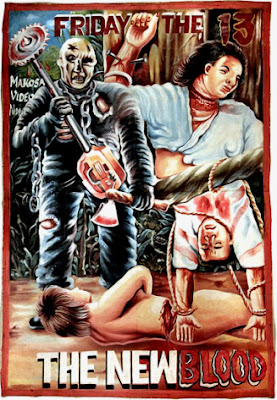 OK, there is no "Birthday" in the title… But: "The film's original working title was Birthday Bash, chosen to conceal its identity as a Friday the 13th film. The entire production of this film was scheduled, completed, and released within six months; shooting took place from October to November 1987 in rural southern Alabama near Bay Minette." (Wikipedia)
Over at Collider, in their ranking of "best to worst", they ranked it 8th out of 12, saying "The New Blood came out in the time of Scanners (1981 / trailer), which may explain why anybody (anybody!) felt the need to match Jason up against a young telepath (Lar Park-Lincoln). In this case, the telepath also happens to be a curious and damaged blonde, who accidentally brings Jason (Kane Hodder) back from the dead when she begins to remember how she killed her father (John Otrin) with her powers on the very same stretch of Crystal Lake property. Yes, it's convoluted, and the fact that the telepath storyline is given a bogus sense of self-seriousness bogs The New Blood down hugely. The deaths are not particularly memorable, and the characters, even for Friday the 13th, are written with little in the way of focus or even marginal resonance." 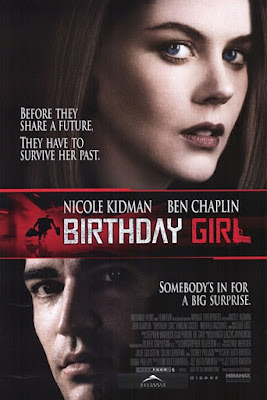 A thriller we missed, about which Rolling Stone says: "Birthday Girl [...] is merely serviceable — a sexy ride that doesn't dare enough dangerous curves. It's Nicole Kidman who brings heart and erotic heat to the role of Nadia, the Russian babe whom shy Brit bank teller John Buckingham, appealingly played by Ben Chaplin [of Lost Souls (2008)], orders on the Internet. John almost sends Nadia back because she can't speak English. He changes his mind when Nadia brings his centerfold fantasies to life in bed. The plot, such as it is, thickens when Nadia invites her cousin Yuri (Mathieu Kassovitz) and his pal Alexei (Vincent Cassel) to visit on her birthday. You're right to be suspicious, and it's not just that two French actors are playing Russians. British director Jez Butterworth hits more than a few bumps as the movie lurches from merry to menacing. But keep your eye on Kidman, whose kinky, kittenish performance turns unexpected emotional corners that pull you up short. […].
Trailer: 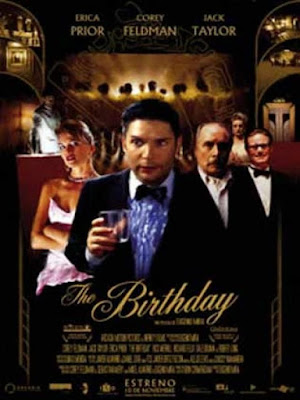 We actually have a DVD of this movie in our "To Watch" pile, but just haven't gotten to it yet. Gotta admit, tho, it does look interesting. The extremely choosy Worldwide Cinema Massacre, in any event, lists it as "Of Some Interest" in its list of "Borderline Extreme Movies": "Unique, cult, Spanish, Lynchian-horror movie with Corey Feldman as a very prominent lead, somehow carrying the movie in a strange, Jerry-Lewis-esque nasal performance. Most of the movie is quite normal, actually, but it builds up slowly for a very overwhelming ending. Norman is a weak loser in love with a rich girl who barely seems to be able to stand being with him. He joins her for her father's birthday party in a strange retro-hotel straight out of Barton Fink (1991 / trailer), and spends the evening trying to talk to her while trying to avoid embarrassing her. But strange things are afoot with the waiters, and people keep ending up dead, while some madman keeps giving him instructions on how to stop an apocalyptic cult-ritual. The climax blends ear-splitting sound, silence, complete chaos, and very strange and incomprehensible goings-on, as all hell breaks loose and Norman tries to stop it with increasingly desperate measures. Reminiscent of Miracle Mile (1988 / trailer) in how it starts as a regular movie gradually increases the chaos for an explosive ending, leaving you wondering when and how it turned surreal."
Trailer: 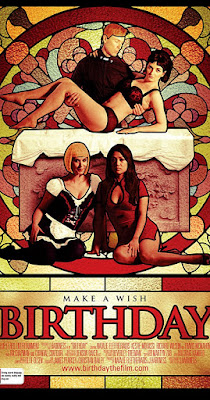 "M (Natalie Eleftheriadis) is the highest paid of the sex worker girls at Scarlet's, but, even on her 25th birthday, it's business as usual. Instead of celebrating, her day is spent answering the silent prayers of Father Phillip (Travis McMahon), who has lost his faith and providing counsel to her colleagues, the vivacious Lily (Kestie Morassi of Darkness Falls [2003 / trailer] and Wolf Creek [2005 / trailer]) and troubled single mum Cindy (Ra Chapman). Amidst the demands of the no-nonsense Scarlet (Chantal Contouri of Thirst [1979 / trailer]), M's secret birthday wish goes unanswered, until Joey (Richard Wilson of The Loved Ones [2009 / trailer]) knocks on her door; a young man who has never learned to love, or even how to kiss. But Joey also has a secret, it's his birthday too." (Urban Cinefile) Looks arty.
Trailer: 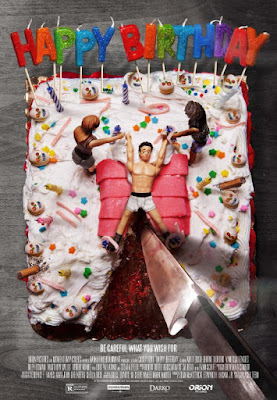 "Happy Birthday stars Matt Bush as Brady Baxter, the titular birthday boy, who embarks on a trip to Mexicali with his best friend Tommy (Riley Litman) after he finds out that his girlfriend cheated on him. At first, both friends are entranced with the shadowy beauty of the Mexican night-life, but things take a turn for the weird when they accompany fellow Americans Katie and Lucia, played by Vanessa Lengies and Britne Oldford, back to their hotel room. This may sound like a standard plot for a thriller about two friends trapped in a shady corner of Mexico, but there are quite a few surprises in store for patient viewers. It would be a crime to spoil any more of the main story, so suffice to say that the movie feels like an insane amalgam of Eli Roth's Hostel (2005/ trailer), Rodriguez's Desperado (1995 / trailer), and even a certain David Fincher movie." (Bloody Disgusting)
Trailer: