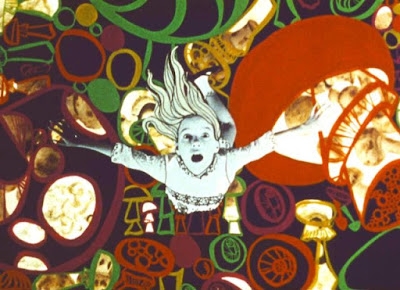 
Needless to say, that classic rock song from 1967 is not an anti-drug song. But whereas songstress Grace Slick took Alice in Wonderland, that classic fantasy by the girl-loving Lewis Carroll aka Charles Lutwidge Dodgson (27 Jan 1832 – 14 Jan 1898), to extol the experiences to be had with pills, smoke and mushrooms, some four years later, in 1971, the National Institute of Mental Health turned to the tale to produce what was ostentatiously an anti-drug short film for kids. One assumes that they must have been stoned when they greenlighted the project, for it could well be that there is no other anti-drug film in the world that makes drugs look as much fun as the resultant short film,  Curious Alice (1971). Thus, it is hardly surprising that not long after the short came out, "the National Coordinating Council on Drug Education slammed the movie, calling it confusing and counterproductive" [Open Culture]. 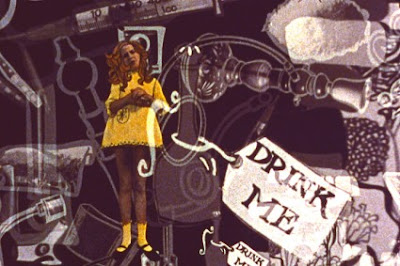 Over at the National Archives' Unwritten Record blog, film preservationist Audrey Amidon insightfully explains what goes wrong with the short: "In Curious Alice (1971), a film intended for eight to ten year olds, our young Alice falls asleep while reading a book. She encounters cigarettes, liquor, and medicines, and realizes that they are all types of drugs. When she sees the 'Drink Me' bottle, she understands that it contains something like a drug, yet after a half-second's consideration, she drinks the entire bottle and enters a fantasy world. In Drug Wonderland, Alice learns about the hard stuff from her new friends the Mad Hatter (LSD), the March Hare (amphetamines), the Dormouse (barbiturates), and the King of Hearts (heroin). The events of Curious Alice play out as an expression of Alice's drug trip. Unfortunately, the trip is kind of fun and effectively cancels out the film's anti-drug message.
"The psychedelic Monty Python-style animation in Wonderland is one of the best things about Curious Alice. It's also one of the biggest reasons that the film is an overall misfire. If one listens closely, Alice is saying plenty about why drugs are bad, but the imagery is so mesmerizing that it's hard to pay attention to the film's message. Further, the drug users are cartoon characters with no connection to real people or real drug problems. Why take the March Hare's drug problem seriously when you know that Wile E. Coyote falls off a cliff and is always back for the next gag?"*
* At Open Culture, a comment by a former child who saw the film at school ("CEH in NJ") indicates that the short may have been more effective than is credited: "Images and how we view images have changed significantly over time, as exposure to images has changed. Remember this film was produced prior to the video games and internet. To a child of the 1970s (e.g. myself), the disjoint presentation and cartoon overlay techniques were disorienting and vaguely disturbing, leaving my class silent and uneasy when reel ended. We were very happy to be excused for recess." 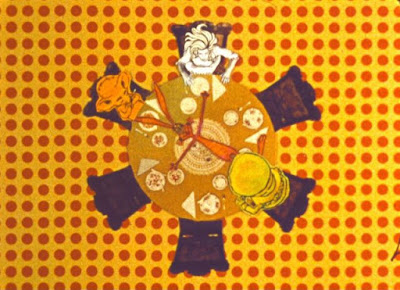 Little is actually known about the production of the short, as not only do all surviving copies lack credits but there currently seems to be no known existing documentation of the production. Over at the often unreliable imdb, they offer some credits that are at best neither fish nor fowl — where's the documentation? — but which nevertheless are spread without question. They supposedly know the real names of both Alice (Elizabeth Jones) and her cat (Sparky), and even offer the mildly plausible claim that the great educational film propagandist Sid Davis  (1 April 1916 – 16 Oct 2006) — see a wasted life's short film(s) of the month for Sept 2017, Seduction of the Innocent (1961), and Sept 2013, Boys Beware (1961) — was Curious Alice's executive producer. Odder is the writing credit given to DJ Dave Dixon, whom the imdb also inexplicitly claims as an uncredited co-writer of Mickey Mouse in Vietnam (1968), our short film for August 2018.
All things considered, when it comes to Curious Alice, we think all production credits are unknown, and currently circulating ones (thanks to the imdb) are bogus. (Sorry, Sparky.)
But the film is not. Enjoy this truly wild animation for what it is: a fun trip.

Now, should you need more Alice-inspired craziness, take a gander of our short film for March 2009, the truly disturbing animated acid trip that is Malice in Wonderland (1982), by Vince Collins.
Posted by Abraham at 10:40:00 AM