"What Jimmy didn't know was that Ralph was sick; a sickness that was not visible like smallpox, but no less dangerous and contagious; a sickness of the mind. You see, Ralph was a homosexual: a person who demands an intimate relationship with members of their own sex." 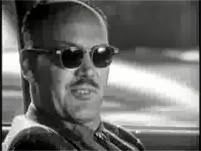 This month's Short Film of the Month has been chosen less because we find it good — which we don't — but because we find it upsetting and jaw-droppingly idiotic. And as it "shocked and awed" us so much, we thought we would share it. Rest assured, this is a as much of a hate film as, say, Fritz Hippler's infamous anti-Semitic film The Eternal Jew / Der Ewige Jude (1940 / full film), but whereas Hippler's "documentary" focuses on the filth that is the Jew, who we all know want to do nothing other than murder and eat Christian children and then screw their mommies so as the degenerate the purity of the race (when they aren't busy bringing financial ruin to the Western world), this "educational" film here focuses on the sick pervert that is the homosexual, who of course is only interesting popping your son's cherry and converting him into one of his own.

"One never knows when a homosexual is about. He may appear normal and it may be too late when you discover he is mentally ill." 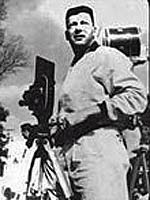 Perhaps somewhere in the film there is a glimmer of a valid message that one should be wary of strangers, but this scrap of a legitimately educational message is lost in the vitriol of the hate-mongering viewpoint of the filmmaker, Sid Davis (1 April 1916 — 16 October 2006), pictured above, who makes a rare appearance in one of his own films here in Boys Beware as the man at the beachside public restroom who is hot for the joystick of "Bobby".
Davis, called by one online source "the Roger Corman of educational films", supposedly began his filmmaking career as a child stand-in (and even appeared in the Our Gang series) and continued doing stand-in work into the fifties, particularly for his personal friend John Wayne, for whom he was a regular stand-in for almost a decade (1941-1952). Wayne even supposedly lent Davis the money to make his first educational scare film, The Dangerous Stranger (1949 / full film). The short film was a big success, and over a period of some 27 years Davis went on to make estimated 150-200 "educational" films of varying veracity and pedagogic usefulness but that nevertheless enjoyed great popularity amongst the teachers of the American Way. These films, and real estate, made him a millionaire.

"The decision is always yours, and your whole future may depend on making the right one. So no matter where you meet a stranger, be careful if they are too friendly." 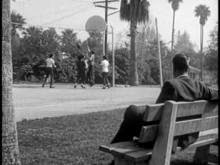 Davis's films, which were seldom written with the involvement of any specialists on the topic at hand, were morality plays that played on the fears of his audience, the American youth, warning them against any form of misbehavior, for that would surely lead to death. To quote the NY Times, his "movies are squarely in the tradition of cautionary literature for children, whose best-known example is probably Struwwelpeter, the German tale of the dreadful fate of a dreadful child, which has been traumatizing young miscreants since the mid-19th-century. Mr. Davis's films, most live-action, some animated, are 16-millimeter equivalents. They are small mirrors of postwar anxiety in an age when juvenile delinquency [and drugs and sex and any form of breaking the norms or being an individual or different] was perceived as a looming threat."

"Public restrooms can often be a hangout for the homosexual."

Shot in that hotbed of homosexual activity, Inglewood, California, USA, Boys Beware has been referred to by some as the Reefer Madness (1937 / full film) of homosexuality films, and indeed its technical finesse and excessive hammering of its misinformation is comparable to that classic and entertaining anti-pot film, but Boys Beware is far more hateful in its unabating ignorance and self-righteousness than that earlier Poverty Row exploitation-cum-morality play. And as such, it is also a bit harder to laugh at — for while it would be nice to think that bigotry and hatred and simple lack of knowledge that it so loudly espouses is a thing of the past, we all know it is not.
For a well-written and thoughtful commentary on Boys Beware — in other words, exactly that which you do find here — we recommend Movie Magg's discussion of the short film found here.

"The companionship, the praise, the friendly attitude dispelled any misgivings Mike might have had about going with a stranger. He probably never realized until too late that he was riding in the shadow of death, but sometime that evening, Mike Merritt exchanged his life for a newspaper headline."

Personally, we would love to do a modern version of Boys Beware, but change the white homosexuals out recruiting chicken into blackface Negroes who, in turn, are in pursuit of the virtue of the white-skinned virginal...
Oh, wait a minute! D.W. Griffith sort of already did that in Birth of the Nation (1915 / full movie), didn't he?
Davis, like Roger Corman ever a man to cut corners where he could, saved the time and expenditure of a new idea or script or music by remaking Boys Beware in 1973 as Boys Aware, which we have embedded below as an extra.