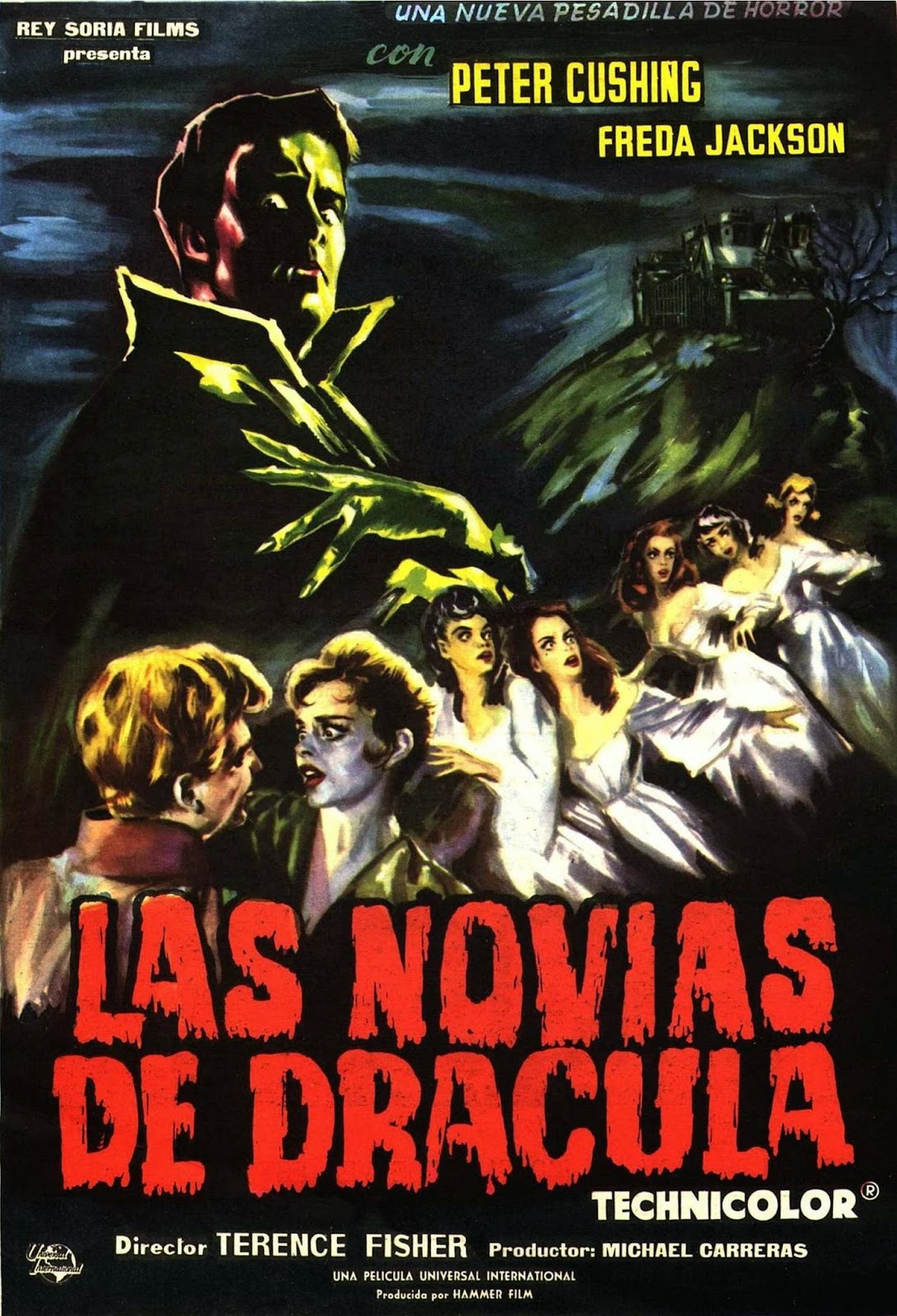 (Spoilers.) We are not impressed. The second of the three Dracula movies made by Terence Fisher for Hammer, The Brides of Dracula is also the second of a grand total of eight Hammer productions featuring the famed Count — and also the only one not to feature Christopher Lee in the title role (but then, Dracula himself never even shows up in this movie, and is only referred to twice in passing). Wherever it sits in the cannon of Hammer vampire films, it is without a doubt one of the most overrated of all the "classic" Hammer horror films. Indeed, rather than the stellar reputation it seems to have, The Brides of Dracula should better be qualified as one of Hammer's great turkeys. 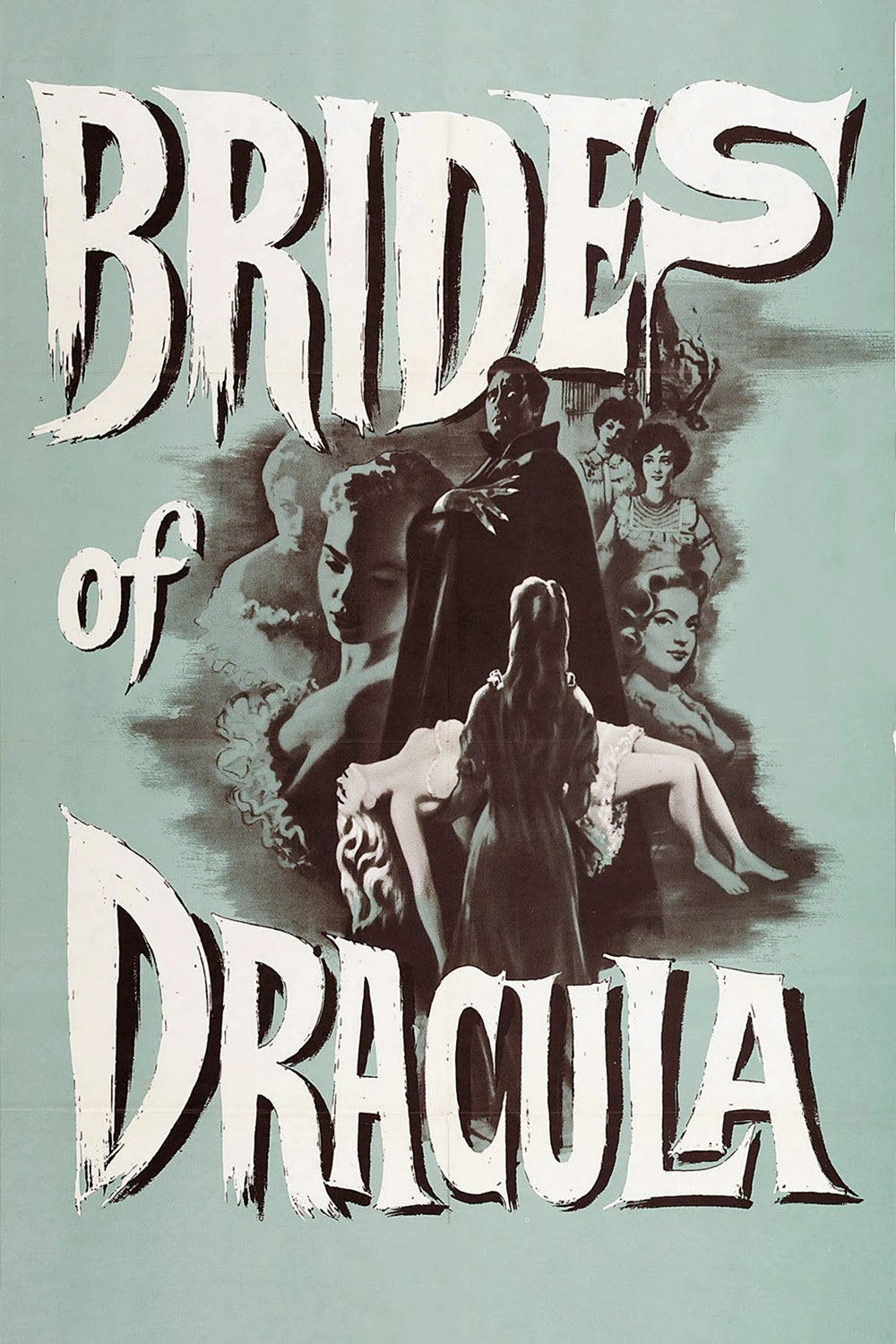 As normal with all Hammer films neither the costumes nor sets nor babes can be faulted. Likewise — but for the titular bloodsucker — the movie also features fairly decent casting and some good acting. The story itself, however, is an illogical mess overpopulated with tertiary characters. The script is little more than a variety of unbelievable elements strung together so badly that it could easily and believably be attributed to Ed Wood Jr. rather than the 3 or 4 names listed in the credits (one name of which is Jimmy Sangster). 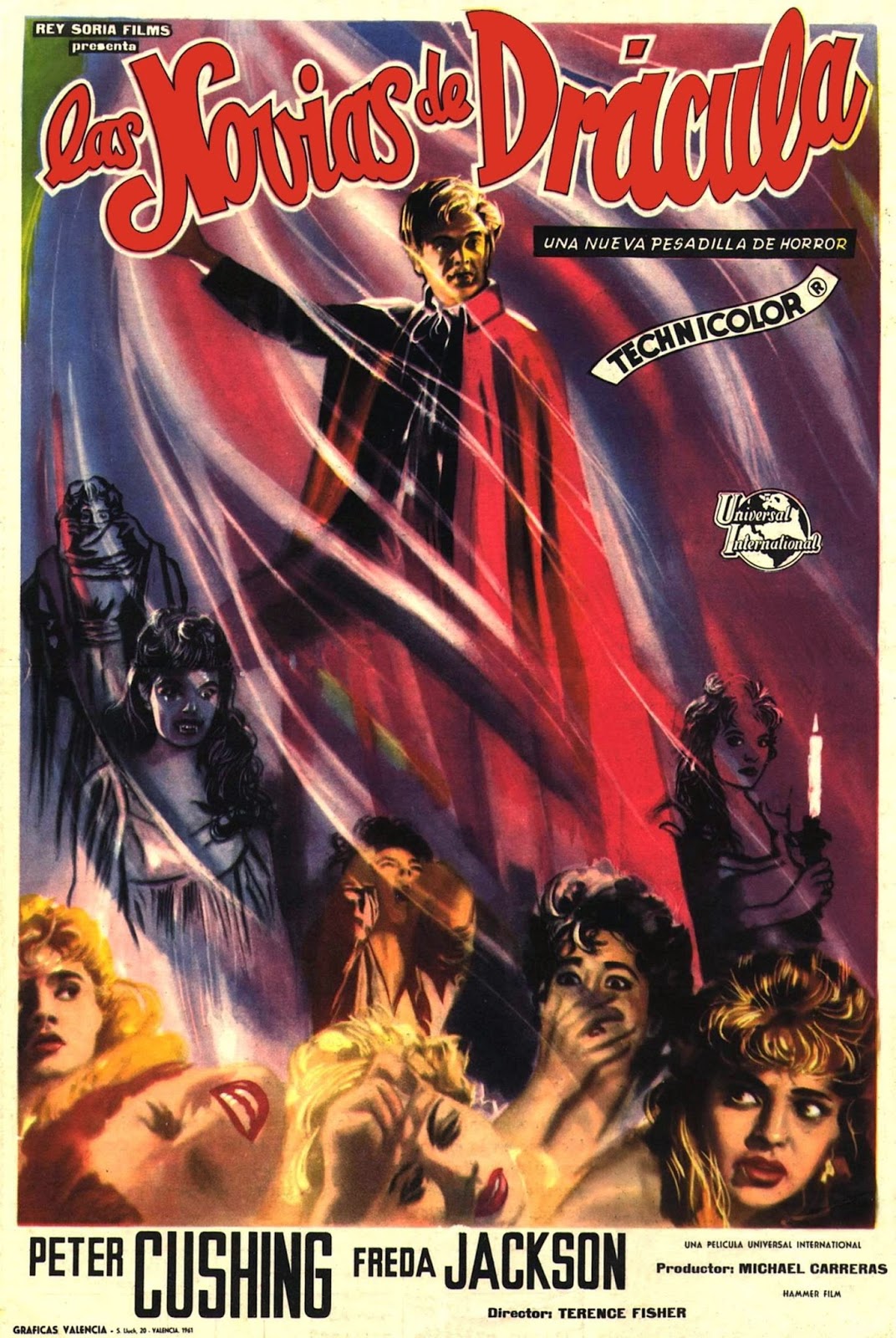 The Brides of Dracula starts with a voiceover informing us that though Count Dracula is dead, the world is still populated by his evil disciples — though in this case, the "world" seems to be Transylvania sometime in the late 19th century. Marianne Danielle (Yvonne Monlaur of Circus of Horrors [1960 / trailer]) is on her way by stagecoach from Paris to teach at the all-girl Lang Academy, but along the way her stagecoach driver deserts her at an obscure roadside Gasthaus. Of course the landlord warns her to leave the area before nightfall, but Marianne obviously lacks the brains needed to be frightened. Baroness Meinster (Martita Hunt) shows up, and before Marianne can say "I am young and stupid and want to die," she accepts an invitation to spend the night at the Baroness' big, eerie castle. At first, the only other person in the castle seems to be the decidedly unfriendly and strange servant Greta (Freda Jackson of The Valley of Gwangi [1969]), but then Marianne discovers that the Baroness has her supposedly dead (and oddly fey) son Baron Meinster (David Peel) chained to a wall in another room. He reveals not that he is a vampire and that the Baroness brings him young and naive girls to feed upon, but rather that the Baroness has told everyone that he is dead and keeps him chained up so as to keep control of his rightful inheritance. In no time short, Marianne steals the key to the shackles and sets the man free. Perversely enough — and perhaps the only disturbing idea in the movie — he promptly takes advantage of his new freedom to sink his fangs into his mother's neck. 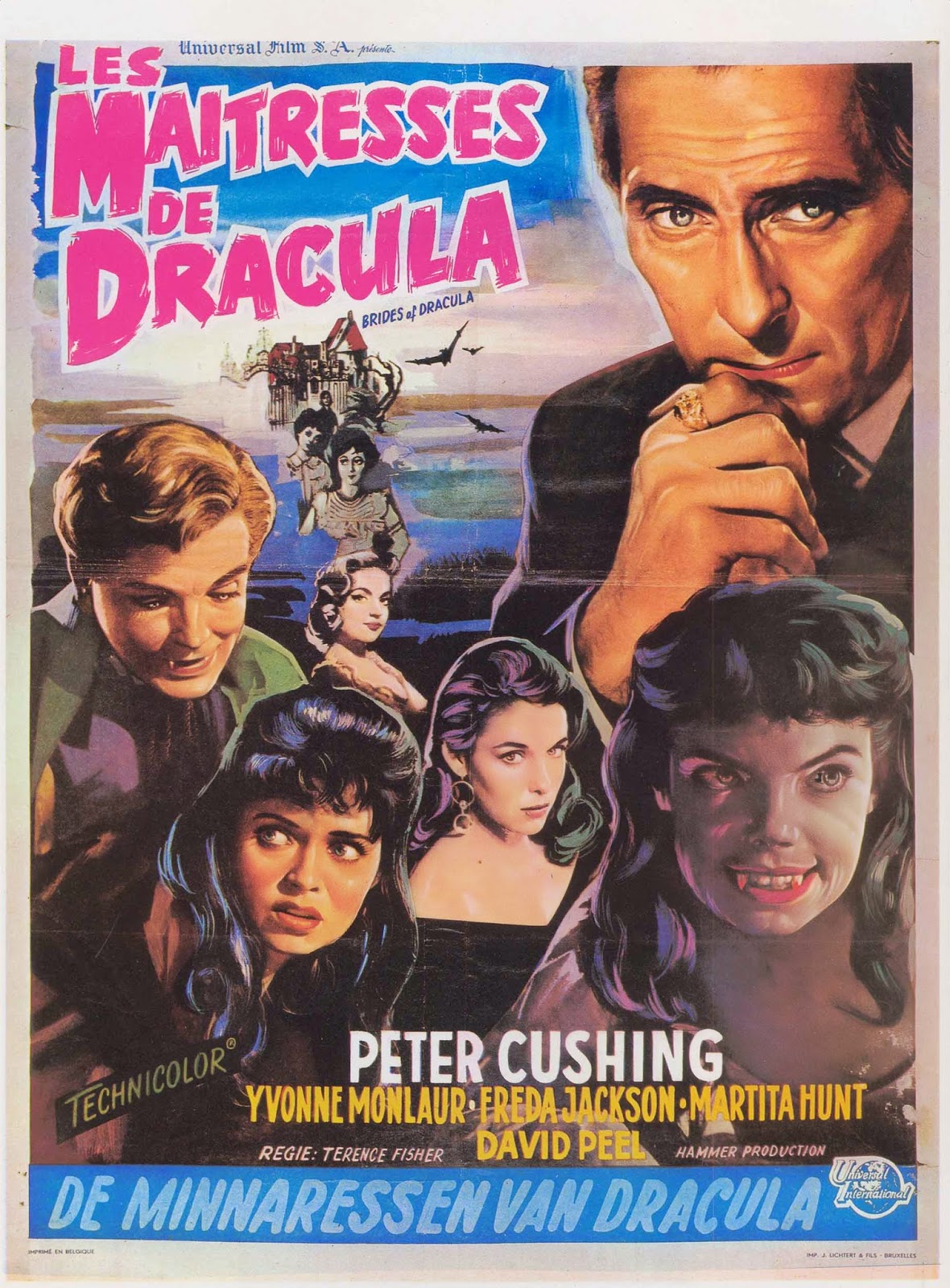 Marianne, frightened by the body of the dead Baroness and the crazed, cackling servant runs out into the night where she is eventually found unconscious but unharmed by Dr. Van Helsing (some actor named Peter Cushing), who in due course drops her off at the Lang Academy. Between a lot of interplay between forgettable characters, Van Helsing kills the now undead Baroness and Baron Meinster sucks on the neck of a few maidens and proposes marriage to Marianne, who promptly accepts. (She obviously is not only of inferior intelligence, but is also highly forgetful and half blind.) But luckily Dr. Van Helsing is there to come to the rescue and, by the end of the film, not only is Marianne still alive but everyone evil is dead. 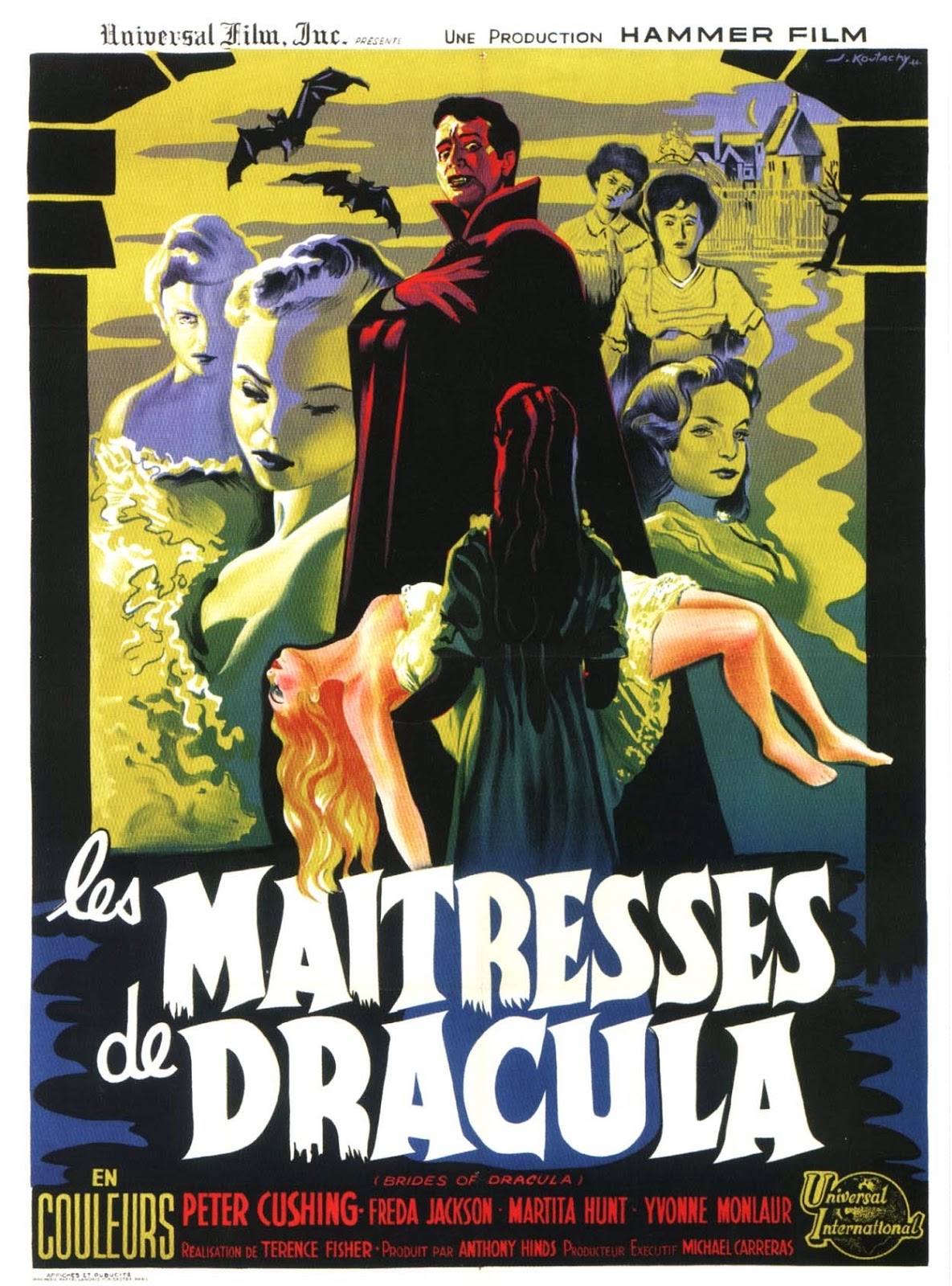 Though the sight of a blonde, dandy-looking and decidedly un-charismatic vampire is a bit jarring at first, it is hardly the biggest of the numerous flaws in The Brides of Dracula. Marianne is slightly better cast, but while she indeed good looking and hardly someone you would kick out of bed, she is such an idiot that one begins to wish that she would get what she deserves and die. Likewise, unlike in the other Dracula films, this time around Van Helsing comes across as a bit of an incompetent klutz with little vampire-hunting experience. But worse than these mistakes in characterization (and an overpopulation of characters which serve no real purpose to the plot) is the laughable lack of logic inherent to the disjointed script. Baron Meinster can change into a bat and magically unlock windows, but is incapable of escaping from a shackle around the leg? (Oh, yeah: the chain was silver — so why didn't his leg burst into flame and/or rot?) When Van Helsing gets bitten by Meinster, why is he the only one to wake up early and not undead? And since when does burning the bite with a hot iron and pouring a little holy water disinfect the wound and prevent the final conversion? Would any woman — other than the most money-hungry gold digger — really say "Yes" to a marriage proposal under the circumstances Marianne does?* (Aside from all the sinister events that occur in the Baron's shadow, they only meet twice and never even actually kiss!) And, really! Who the hell thought up the retarded idea of having the not-so-big and not-so-bad vampire being killed by the cross-shaped shadow of a windmill? (Can shadows only kill when cast advertently?) With flaws like this, it becomes easy to overlook some of the most fake-looking plastic fangs to ever grace the silver screen — but, regrettably, it never becomes easy not to laugh whenever vampy gets all beady-eyed in blood lust. And lets not mention the bat. 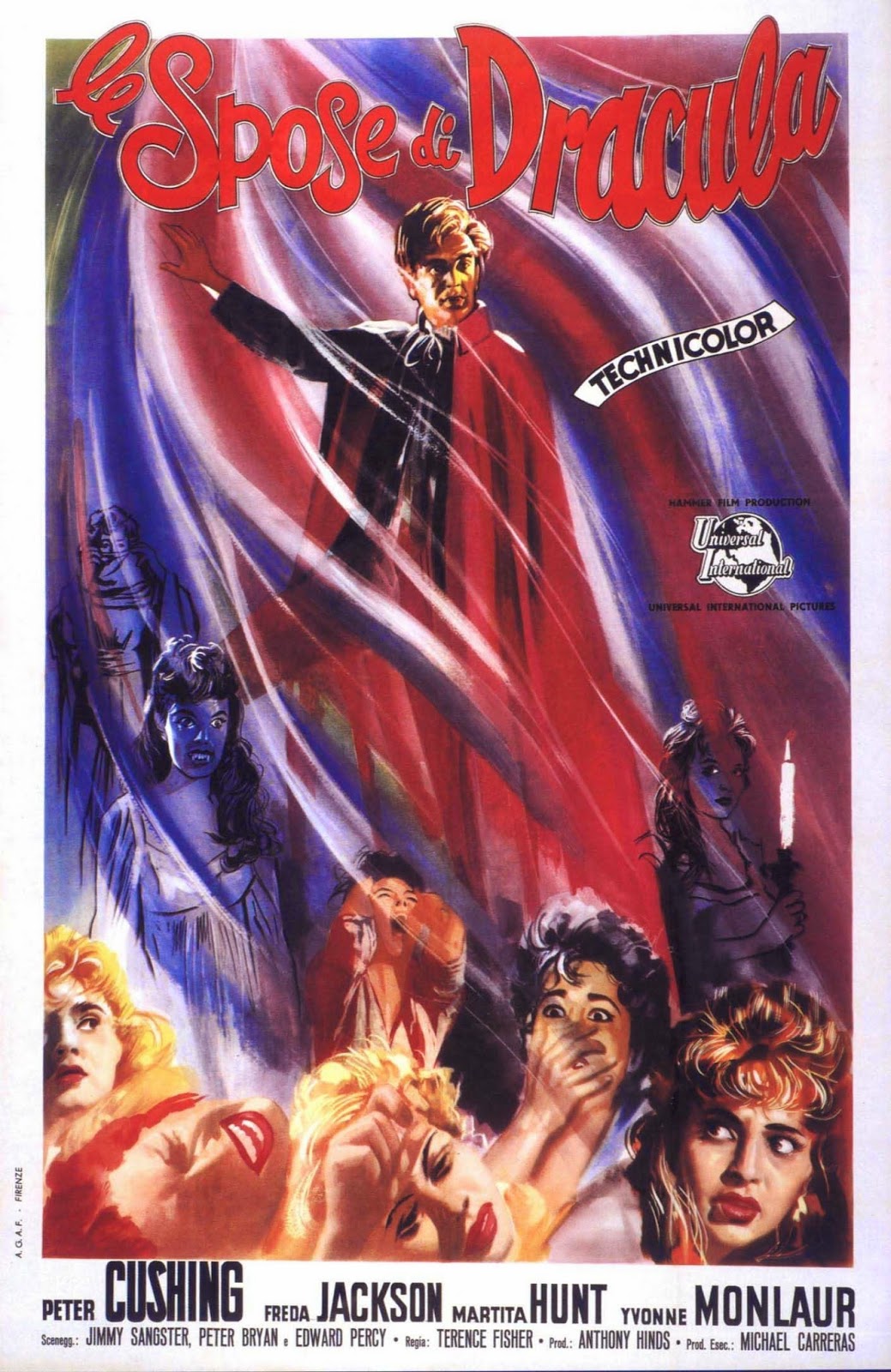 The Brides of Dracula is a film for completionists and people born without brains. If you are neither, then don't bother with this lousy piece of flyshit, the only truly redeeming quality of which (aside from the Gothic trappings, color, sets & costumes) is the typically top notch Hammer cleavage quotient. 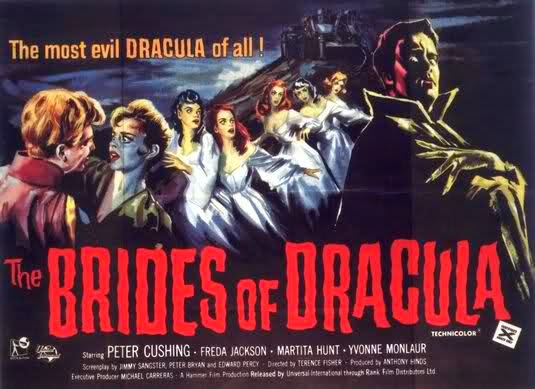 *OK, maybe the times were different then — marriage was more financial security than anything else.

My biggest kvetch with "Brides of Dracula" is the scene when the lock just falls off the coffin for no reason. But I love Cushing's Van Helsing in this--he's more dimensional. He's fearful, determined, athletic (LOVE that swashbuckler move on the chain!) and can out-aristocrat the douchebag headmaster of the school. If Peter Cushing wasn't in the movie, it would definitely be a Hammer non-entity.

I think what I hated the most — as in what made me wanna throw my beer at the tv the absolute most — was the whole Cushing being bitten and waking up and saving himself by burning the bite. (Still waiting for that concept to turn up in some cheap zombie flick.) Really, the beauty of the babes, the colors, and the great Hammer production levels are all wasted in this movie. But your take on Cushing's character, I admit, I've never taken into account and is actually a plus in a movie suffering a lot of minuses.