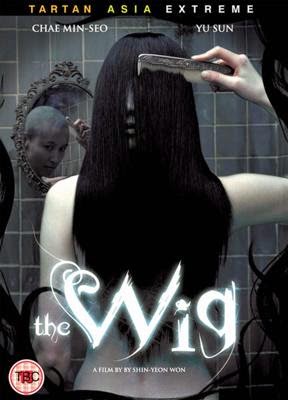 The cover of our German release DVD has a Circe-call like the best that any exploitation distributor could hope to achieve: the back of a hairless, bloodied scalp, two halves sewn together, with a bloodied hand forcing its way out and, branded into one half of the head, "CAUTION SICK SHIT". Yep, Harry Novak, David Freidman or Jerry Gross couldn't have done better: the presentation is 100% grindhouse and as inviting to people like us as a beautiful, dreamy-eyed, big-breasted babe who purrs "I swallow." 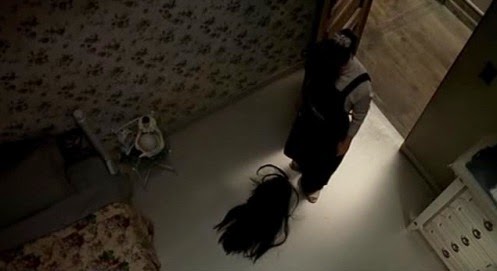 But like so many advertising campaigns of those former masters of exploitation, the way the The Wig is sold has little to do with the film itself. "SICK SHIT" might do well to describe such entertaining, over-the-top Japanese excesses as Tokyo Gore Police  (2008), Meatball Machine (2005), Vampire Girl vs Frankenstein Girl (2009) or the truly repulsive Zombie Ass: Toilet of the Dead (2011 / trailer), but in the case of this Korean movie here, which is unarguably closer in tone to the visually attractive Korean horror flick A Tale of Two Sisters (2003) or  Thai flick Shutter (2004) than any of the Japanese Pop Gore films just named, the description is way off base. The Wig is hardly "sick shit" — other than one scene, maybe, the one in which the cancer-suffering girls begins pulling pills out of her skull — it is a slow-moving but involving horror film that strolls casually but disturbingly to a truly depressing ending. 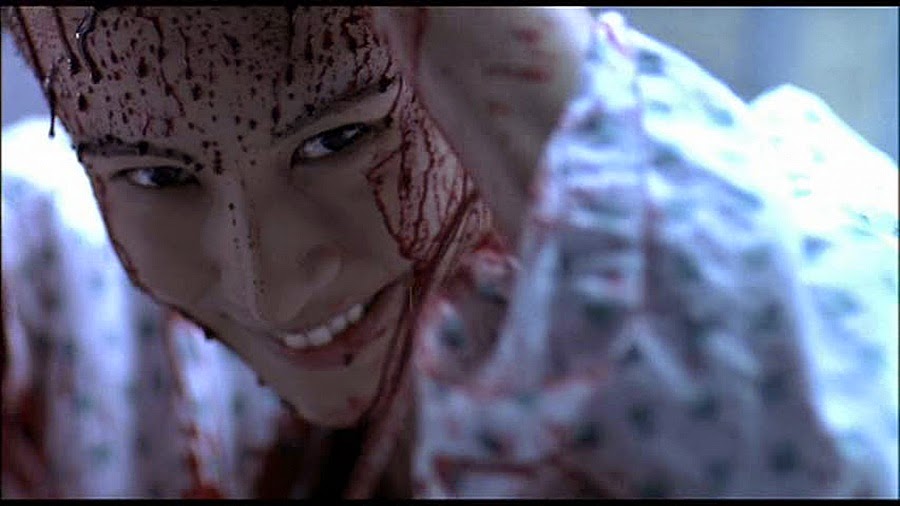 This is one you can watch with the girls, which isn't meant as an insult — The Haunting (1963 / trailer), one of our all time favorite films, is also one you can watch with the girls — it just means that there is a lot more art and artistic intention than exploitive drive, a lot more mood than shock, and a lot more emotion than adrenaline or blood — although enough shock and blood are indeed present. And it has a pretty good classical music soundtrack, too. The Wig is simply a fine example of a horror movie in which the filmmakers are obviously attempting to deliver more than just shocks: they realize they are working with a camera, and a camera can be used to make visuals, visuals that in turn serve to propel the story (and, on occasion, simply thrill for being original). 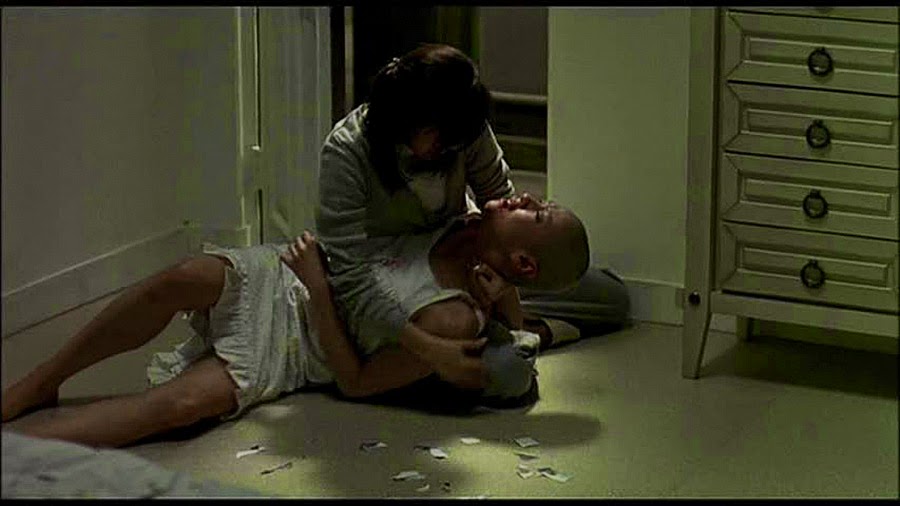 And let's not forget the concept of building and sustaining mood, something this depressing little flick does well, too. The human relationships and interaction in The Wig have as much of a sustained sense of desperation and unavoidable fate as the certain death of the fatally ill young woman who ends up with the titular wig. The characters move within the same circles on the same screen, they love or hate each other, they care or hurt each other, but as close as they are they are separated by walls of secrets and lies and desperation and unavoidable fate — a mixture into which comes The Wig, a cursed hairpiece of beautiful, long real human hair bought by sister Ji-hyeon (Yoo Sun) for her younger sister Soo-hyeon (Chae Min-seo), who is dying of leukemia and bald from chemo and medications. (Ji-hyeon is separated from her surrounding even more by the fact that she cannot speak, having lost her vocal cords in a terrible but disconcertingly aesthetic car accident, a handicap that simply echoes the sense of loss — loss of family, loss of love, loss of life — that threads through the entire movie.)

Like most Asian films, important plot points are inserted so quickly that if you're reaching for your beer you might miss them, but luckily, despite the occasional revelatory flashback, The Wig is relatively straightforward in its narrative: sick girl gets wig, wig makes her healthy and horny for sister's ex and suffer from an occasional nasty hallucination, without the wig — which kills a couple of people along the way — she withers away and has one foot deeper in the grave. What is a loving sister to do? Doubt and guilt hang heavy on the sister's shoulders — and, for some inexplicable reason, on the shoulder's her ex, though for most of the movie we know not why. 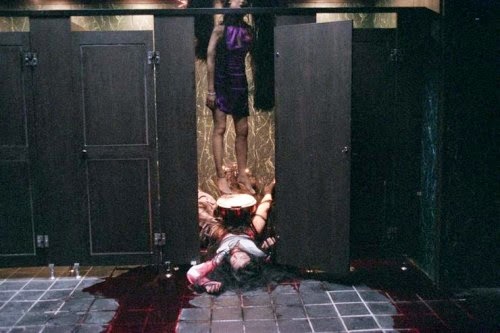 The scares of The Wig, a beautifully made movie dank with unavoidable doom, might not always make sense but they do tend to shock or scare, and are presented in a manner that, while often verging on being almost too beautiful or cinematic, nevertheless aggregate to support the movie's overriding, bleak sense of unavoidable fate. A bit slow at times, The Wig is nevertheless never boring, and keeps you mesmerized all the way to its extremely logical last scene, a truly depressing punch in the gut. Much more effective, in any event, than most Asian, hair-obsessed ghost flicks — One Missed Call (2003 / trailer), anybody?

Not that we have no complaints about The Wig. It attempts to be a bit too clever sometimes, as evidenced in its temporally non-consecutive narrative that the viewer never realizes is non-consecutive until almost the end of the movie. (In other words, the reason the opening scene of the almost-car accident makes no real sense it because it is not the actually start of the movie but a scene of a later point in time.) An unneeded complication to the narrative. Likewise, why the young female student is killed on the bus — we hear about in the news, Soo-hyeon hallucinates it at one point, and the young girl herself sees scary strands of hair when taking a photo — makes no real sense: she had nothing to do with any of the characters other than she took a photo for them, so why did the wig kill her? And, lastly, like so many movies — 28 Weeks Later (2007), anyone? — The Wig relies too dearly upon the fortuitous coincidence typical of Hollywood plotting to drive its story: Seoul, where the movie is set, is a city of almost 10 million inhabitants, and thus must have well over, dunno, a couple of tens of thousand wig shops at least and, naturally, even more wigs. But somehow, of all the wigs in the entire city, sister Ji-hyeon not only buys a wig cursed with an angry killer entity, but a wig — and the corresponding angry spirit — that is also directly linked, we learn along the way, to her immediate circle, namely her estranged x-boyfriend Ki-Seok.*

But: Hey! It's the movies, things like that happen. And in real life, some people actually buy winning lottery tickets, which are surely rarer than possessed wigs.  In any event: The Wig — a downer of a film, but two thumbs up from A Wasted Life. 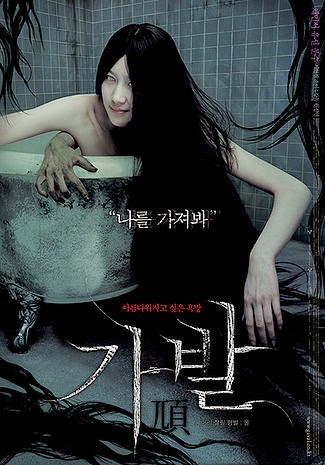 *We won't go deeper into the wig/ex connection, 'cause it does involve one of the more original and surprising twists of the flick.
Posted by Abraham at 4:17:00 PM