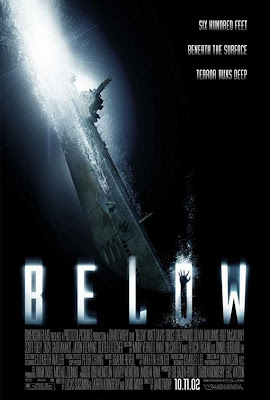 “A submarine isn’t a good place to keep secrets .”

Strange how movie studios work. By the time director David Twohy's made Below in 2002, he had a rather admirable career in genre films behind him. Beginning as a scriptwriter of lesser projects such as Critters 2: The Main Course (1988 / trailer) and Warlock (1989 / trailer), he went on to help pen such fine quality mainstream genre flicks of varying quality and commercial and critical success as The Fugitive (1993 / trailer), Waterworld (1995 / trailer) and (gag) G.I. Jane (1997 / trailer) before giving Vin Diesel a viable if short career with the justifiable sci-fi hit Pitch Black (2000 / trailer), Twohy's third directorial job. With such a track record behind him, it seems more than odd that when it came time to release Below, Twohy’s next film after Pitch Black, Miramax decided to reduce its planned broad theatrical release to a measly 150 theaters (around the world!) instead. Even ignoring Twohy's track record, that decision of the powers-that-be can only raise one question: did they even watch the film they so ignominiously dumped? For their actions surely doomed an atmospheric and chilling film that easily could’ve found a popular audience had it only been given the chance.

The film starts with the submarine U.S.S. Tiger Shark on the way home, but it is detoured to pick up the drifting survivors of a British hospital boat torpedoed a few days earlier. No sooner do they have three survivors—a strong-willed nurse named Claire (Olivia Williams) and two sailors, one of whom is badly wounded—aboard then does the enemy show up. Deep below the water’s surface, the crew of the submarine not only has to deal with the particularly persistent attempts of the enemy to sink them, but there seems to be someone in the midst that wants them found and sunk. The Commanding Officer of the Tiger Shark, Lieutenant Brice (Bruce Greenwood of Disturbing Behavior [1998], The Core [2003 / trailer] and Star Trek [2009 / trailer]) discovers the injured survivor is German and ends up killing him, but with his death the disturbing events begin to take an even more unnatural nature. But are the events truly that of a supernatural nature, or are the crew only slowly but surely going stir crazy? As one crippling disaster after the other occurs, Claire soon finds out that Brice, Loomis (Holt McCallany of Creepshow2 [1987 / trailer] and Alien3 [1992 / trailer]) and Coors (Scott Foley [Scream3, 2000 / trailer]), the three senior officers of the boat, are hiding a secret themselves...

Below is a well acted, well written, well directed and amazingly enthralling amalgamation of a wartime suspense film, psychological thriller and ghost story. The film starts off as a run-of-the-mill wartime adventure film set in a submarine only to slowly and steadily evolve into an effective and intelligent ghost story, and nowhere along the way does it stumble in its narrative tension. (Rather unlike that other "unknown" but critically well-received Brit wartime psychological-cum-horror film The Bunker [2001 / trailer], which gets rather turgid towards the end.) The claustrophobic setting is palpable, particularly in the scenes when the enemy ship is after them, and serves well to emphasize the continually increasing sense of inevitable doom. The book open to Shakespeare's Macbeth that Claire finds in the gangway is an early indication that the events occurring are indeed of an unnatural nature—the play, you might remember from high school, does feature a vengeful ghost—but until the chilling mirror scene everything seen or heard could be explained as natural or imagined. The scares in the movie are less cheap than unexpected, and the overall tension of Below is achieved equally in what the film does and doesn’t show. Indeed, the buildup to the quotable question "Mister Loomis, where's our crew?" shows a restraint in its execution that is seldom found in genre films and, as a result, the shock of the answer is all the more effective.

Miramax may have made an asinine decision in their lack of faith in this film, but if you want a finely wrought tale of tension and horror featuring a superior ensemble cast of familiar faces in an unusual setting you should put your faith in Below. You won’t be disappointed.
Posted by Abraham at 2:40:00 PM

This movie is really good! saw it two times in a row the first time.
Love the felling in it, kind of sureal and it drags you in it.