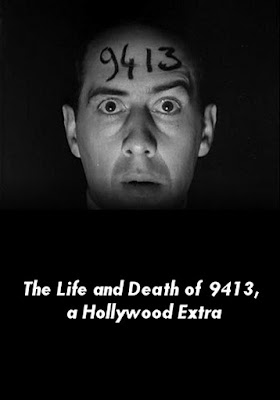 A.k.a. Hollywood Extra 9413, $97, The Rhapsody of Hollywood, The Suicide of a Hollywood Extra, and plain ol' A Hollywood Extra. The odd title of $97 was/is a direct reference to the short film's budget, a massive $97 (that would have the purchasing power of somewhere around $1400 today). To simply quote Wikipedia, "The Life and Death of 9413: a Hollywood Extra is a 1928 American silent experimental short film co-written and co-directed by Robert Florey (14 Sept 1900 – 16 May 1979) and Slavko Vorkapić (17 Mar 1894 – 20 Oct 1976). Considered a landmark of American avant-garde cinema, it tells the story of a man (Jules Raucourt [8 May 1890 – 30 Jan 1967]) who comes to Hollywood with dreams of becoming a star, only to fail and become dehumanized, with studio executives reducing him to the role of extra and writing the number '9413' on his forehead." Horatio Alger never reached Hollywood, it would seem. 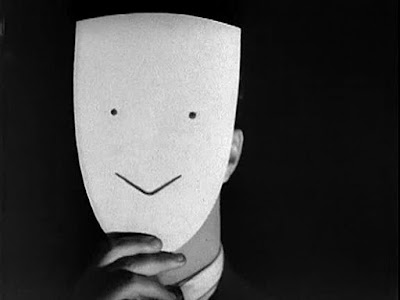 Shot on film ends, the leftover unexposed film stock from Hollywood productions — 1000 feet alone came from the Douglas Fairbanks' movie, The Gaucho [1927 / full film] — The Life and Death of 9413, a Hollywood Extra was supposedly inspired by Florey's own experiences in Hollywood. Initially shown only to colleagues in the business (Florey already had a number of feature-films to his name), when The Life and Death of 9413: a Hollywood Extra was picked up by a distributer (FBO Pictures), it proved an unexpected success and eventually reached more than 700 cinemas in North America and Europe. In 1997, seventy years after it was released, the short was selected for preservation by the National Film Registry, the mission of which "is to ensure the survival, conservation, and increased public availability of America's film heritage." (The short is the first of two Florey films to be selected by the NFR: his drama Daughter of Shanghai [1937 / film], starring the beautiful Anna May Wong (3 Jan 1905 – 3 Feb 1961), was later selected for preservation, in 2006.)

The Full Short:
Florey went on to a long and successful career, primarily in the upper-B films (i.e., unlike the fellow talent, Edgar G. Ulmer [17 Sept 1904 – 30 Sept 1972], Florey was never stuck on Poverty Row) and eventually, after 1951, entirely in TV. His best known projects are probably the Marx Bros flick The Cocoanuts (1929 / trailer / full film), the much too underappreciated Universal horror Murders in the Rue Morgue (1932 / trailer), and the disappointing The Beast with Five Fingers (1946); lesser known films likewise worth watching include the intriguing The Face Behind the Mask (1941 / scene) and the well shot The Crooked Way (1949 / full movie). Florey eventually re-used the narrative of an unsuccessful actor-seeking-career in his mainstream and mundane feature film Hollywood Boulevard (1936), but there it is but one of many subplots in a conventional film and thus lacks everything that makes it so interesting in The Life and Death of 9413: a Hollywood Extra (including all the arty avant-garde stuff). 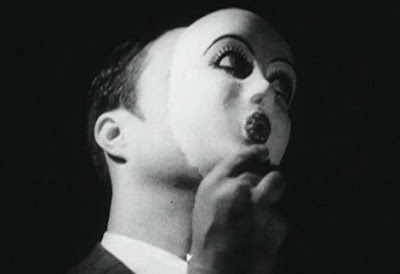 To what extent his co-conspirator of The Life and Death of 9413, a Hollywood Extra, Slavko Vorkapić, was truly involved in the short is something still argued among those in the know, some claiming Vorkapić did everything, others saying he did virtually nothing; indeed, the two filmmakers, at varying times, were not of unified opinion in this regard. For that, Vorkapić also went on to a long and significant career in films and film schools, and is considered an influential figure in American film, if not the father of the montage sequence — something supposedly once called "a Vorkapićh". (Of particular cinematic interest are the visuals he conceived for "the Furies" in the mostly forgotten thriller, Crime Without Passion [1934 / intense opening sequence], and the 3D sequences in the cult rediscovery, The Mask [1961 / trailer].) 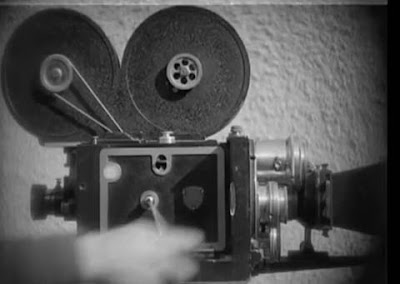 After The Life and Death of 9413, a Hollywood Extra, Florey made a few more shorts in relatively quick succession before concentrating on feature films. Among others, with Slavko Vorkapić he made the now lost short Johann the Coffinmaker (1927), and with William Cameron Menzies (29 July 1896 – 5 March 1957) — he of the original Invaders from Mars (1953 / trailer) and the disapointing The Maze (1953 / trailer) — the not-lost Love of Zero (1928). Flory's last short of note is probably Skyscraper Symphony (1939 / full film), likewise not-lost, which surely must have been a favorite of the Precisionists.

As an extra: Robert Foyer's experimental short with the great William Menzies,
The Love of Zero (1927):
Posted by Abraham at 10:55:00 AM