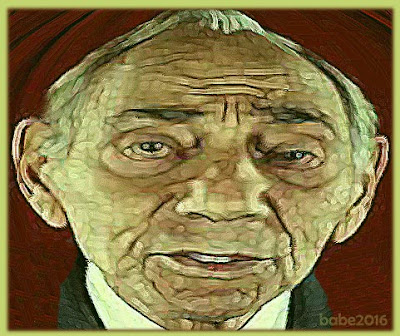 "He seen somethin' different. And he done it."

A seminal force in the world of trash filmmaking, he is considered the inventor of the modern gore film. (In theory, a position he holds with David F. Friedman, but when the partnership ended Friedman's true interest proved to be sexploitation.) To use his own, favorite words: "I've often compared Blood Feast (1963) to a Walt Whitman poem; it's no good, but it was the first of its kind." And a truly fun gore film, too — which makes it "good" in our view.
Unlike Blood Feast and his "better movies", many of the projects he worked on are unbearable cinematic experiences; but more than enough of the others are sublime, otherworldly, like the best of Ed Wood, Juan Piquer Simón  or John Waters. Were it not for innovators like him, A Wasted Life probably wouldn't be.
One of the truly great has left the building. A career review will follow — but first, a few films that may or may not have something to do with the Godfather of Gore. 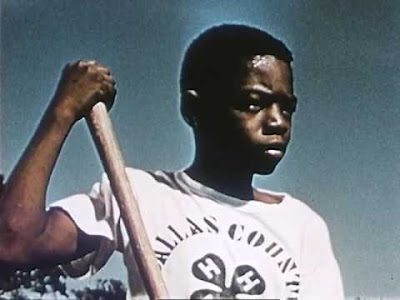 At the Internet Encyclopedia of Cinematographers, on the page for Haskell Wexler (6 Feb 1922 — 27 Dec 2015), they point out that Wexler had something to do on an Encyclopædia Britannica short documentary entitled Look to the Land (1953), one of the cinematographers of which was a "Gordon Weisenborn", the director of this short, who later went on to direct the HG Lewis production The Prime Time (1960). The IEC states: "Gordon Weisenborn (= Herschell Gordon Lewis)".
If GW were indeed HGL, this Encyclopædia Britannica short would be one of the earliest films that HG Lewis directed.
Over at the Internet Archives, they explain the short: "Presents the viewpoint that America has often unwisely used its land and forest resources, that all people are dependent upon the land and must, therefore, be directly concerned with problems of conservation. Documents the misuse of these resources and the resulting problems, as the Wanderer (narrator) visits a New England farm auction, the Connecticut Valley, an Alabama cotton farmer, a Dakota farmer, a Wyoming cattleman, and a timberland region. Illustrates the interdependence of all the people in a river basin. Includes folk songs as background music."
Look to the Land (full short):
But you know what?! "Gordon Weisenborn (= Herschell Gordon Lewis)" is wrong! Gordon Weisenborn (20 Mar 1923 — 4 Oct 1987) was real person of his own, not a pseudonym. 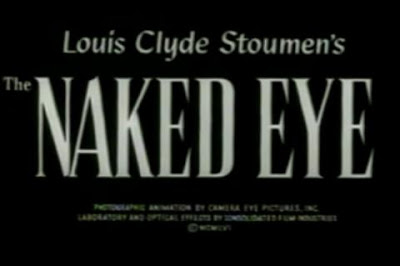 A documentary about photography narrated by Raymond Massey. According to imdb, and various websites that parrot imdb, HG Lewis was an associate producer on this project — something we could not confirm. But if everyone thinks it, it can't be wrong, right?
The Naked Eye was nominated for an Academy Award in 1957 as Best Documentary Feature; it lost out to Jacques-Yves Cousteau's The Silent World (trailer).
The First 9.38 Minutes of
The Naked Eye: 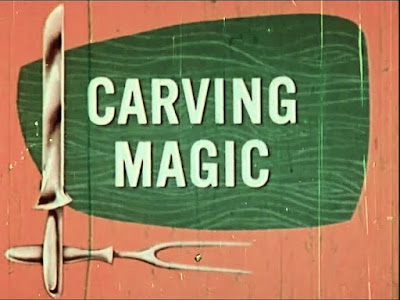 Sponsored film from Swift and Company about how to accurately carve meat. According to Rick Prelinger's The Field Guide to Sponsored Films, this 21-minute or 13-minute film (it was released in two versions) was directed by Herschell Gordon Lewis, making this the earliest film we could find that he directed.
Recognize the men? It's Harvey Korman (Blazing Saddles [1974 / trailer] and Munchies [1987 / trailer] and more) and HG Lewis film regular William Kerwin. Among Kerwin's non-Lewis movies of note are the trash classics Six She's and a He (1963 / half the movie), Sting of Death (1965 / scene), Playgirl Killer (1967 / trailer), Flesh Feast (1970 / trailer, with Veronica Lake), Sometimes Aunt Martha Does Dreadful Things (1971 / credits), Dear Dead Delilah (1972 / Off with her Head), The Single Girls (1974 / trailer), Whiskey Mountain (1977 / trailer), Barracuda (1978 / trailer) and more, more, more.
Carving Magic for 21 minutes: 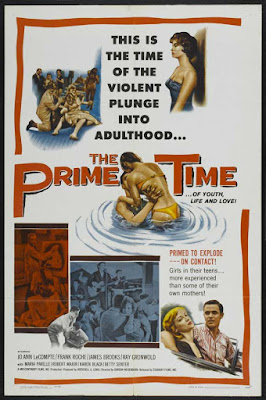 Aka Summer Madness, when later shown as part of a double feature with Lewis's directorial effort, Living Venus (1961).
Plot, at Mubi: "A bored young girl (Jo Ann LeCompte) looking for excitement gets involved with nude modeling, drugs and a rock band." Also features the unknowns: Frank Roche, Ray Gronwold, and Maria Pavelle.
Mildly famous for being the film debut of Karen Black: blink and you miss her role as "Betty - Painted Woman". That's her to your left, below. 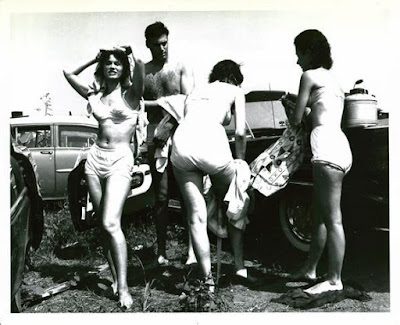 The Gordon Weisenborn page says, "[...] the first feature shot in Chicago in over 40 years  — The Prime Time — with sequences that included skinny dipping, catfights and rockabilly. The film was produced and funded by adman, radio and TV producer, and part-time professor Herschel Gordon Lewis. The directing of the film has been erroneously credited Lewis, who would eventually go on to direct erotica and horror films."
Going by the full plot at TCM, it's a soap opera bad gal trash. Regrettably, we couldn't find a trailer online. But Jo Ann LeCompte (below) does look good. "A jumpin' rock combo plays "Teenage Tiger" (lyrics by Lewis, performed by "The Dodos")" [The Exploding Kinetoscope]. 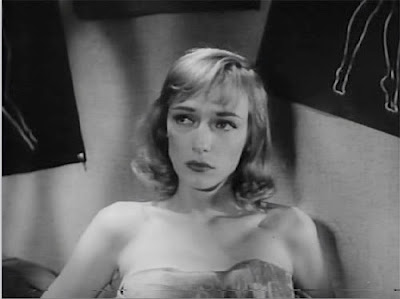 You can get the flick at good ol' Something Weird, where they say: "The Prime Time contains all the makings of a great j.d. grinder. The beat slang and a rock combo belting out the non-hit tune "Teenage Tiger" are alone worth the price of admission. [...] The Prime Time marks the first association of Lewis with David F. Friedman, billed as 'Production Supervisor in charge of Advertising, Publicity, and Exploitation'. Together they would collaborate on eleven more features and change the face of exploitation film history. A.k.a. Hell Kitten."