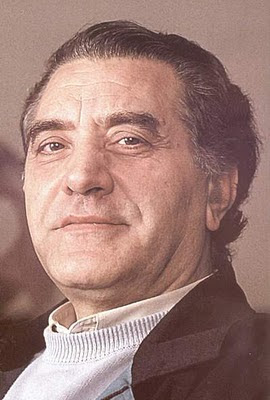 How they keep dropping like flies. This week saw the demise of yet another film personality, this time around a name known by only fans of true trash cinema. The Spanish filmmaker Juan Piquer Simón, born 16 February, 1935, in Valencia (Spain, not California), died at the age of 74 on January 7th, following a long battle with lung cancer. Some time ago, Simón said "I know I've worked in a manner and with a genre that critics do not appreciate much." For that, however, he worked in and with a manner and genre that have pleased many a viewer, particularly those with an appreciation of the mondo or trash aspects of low budget euro film. True, he hadn't directed a film since 1999, and the films of note during the years he was active were all before 1990, but all his films are true experiences that are worth viewing, particular if you’re the type of person who likes Ed Wood films – indeed, try to imagine Ed Wood films in color and with gore, and you come close to how some of his best films look like. Juan Piquer Simón, rest in peace – we will miss you. 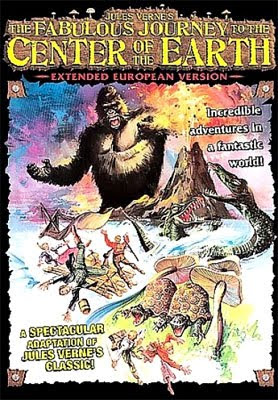 Entitled Viaje al centro de la Tierra in Spain, it was released in the USA as Where Time Began. This film is often called the worst version of the story ever filmed, but it is simply a super-cheap kiddy film and as such should be watched as one. Don't watch this expecting to see the gore and guts of prime Simón trash, watch with an impressionable kid who will enjoy the film as you groove out at the film's patina of shoddy special effects and cheap filmmaking. This one is pure Spanish-imitation Roquefert... 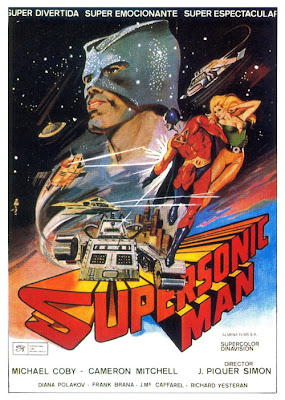 Classic Juan Piquer Simón. Also known simply as Sonicman, this slice of psychotronic weirdness has to be seen to be believed. Cameron Mitchell, one of the great slummers of all time, was really slumming it when he took part in this Superman (1978 / trailer) rip-off. Sold nowadays as a spoof of Superman, don’t be fooled: had William Beaudine filmed a script by Ed Wood, the final result couldn't have been a more enjoyable movie than this serious filmic accident. Tune in, turn on and drop out to total narrative and technical ineptitude – but don’t forget the weed. 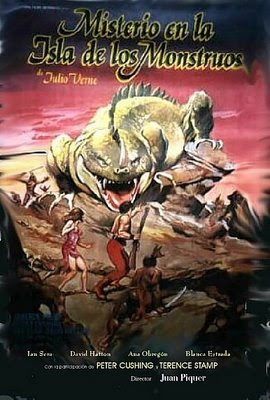 Peter Cushing, Terrence Stamp and Paul Naschy (in a cameo) are all in this wonderful piece of trash. Bad special effects, simple characters, patchwork plotting and creatures that would not have cut the mustard in B&W films of the 30s or 40s (but possibly might have made it into some Japanese Godzilla film): Mystery on Monster Island is truly inane, innocuous and fun stuff, perfect for a rainy day with the kids – though they might not enjoy it as much as the true trash aficionado. Based on one of Jules Verne’s lesser works, Godfrey Morgan: A Californian Mystery, the film tells a typical "lost world" story but with less than typical special effects. Pure cheese! 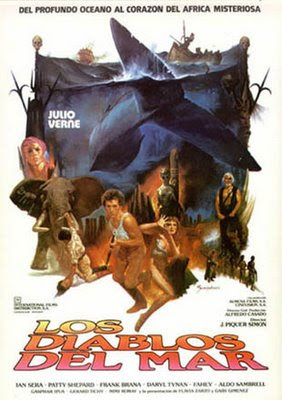 Why bother watching a trailer to a bad film when you can suffer through the whole thing? Boys verses pirates on the high seas and in Australia. Sound good? Nope – and it isn't either. 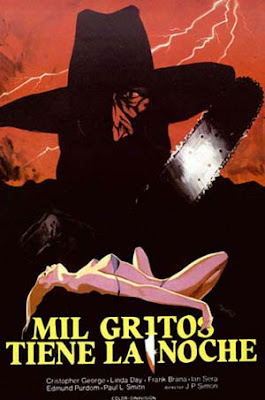 Classic Juan Piquer Simón. The tag line says it all: "You don't have to go to Texas for a chainsaw massacre." The first film that made people start to remember his name: a cult slasher "classic" starring the late, great Christopher George and his wife Linda Day George. Like good wine, this film keeps getting better with age. A young boy punished for doing a jigsaw of a nudie-cutie in 1942 hacks his mother to death. Forty years later, a mad killer is going around a college campus killing gals to make a jigsaw body. Can the police stop whoever it is before there is no one left to play tennis? A wonderfully surreal, sexist and sleazy film – watch it with your girlfriend any day that you want her to finally break up with you. And what a truly jaw-dropping ending. (The poster above is pretty jaw-dropping, too – anyone else see a more than slight resemblance to Mike Kaluta's Bronze Age take of The Shadow?) 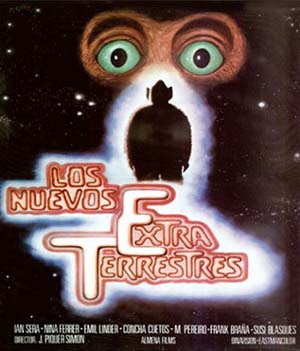 Here at A Wasted Life, this flick is high on our list of unavailable films we would love to see – and no, we don't want to see the Mystery Science Theatre 3000 version, 'cause we see that a bit like making fun of the mentally handicapped. The inanity begins with the aliens of the flick themselves: they have the hairy ape body of "Ro-Man" from Robot Monster (1953 / trailer) and the head of Alf. The film was originally meant to be about nasty, people-killing aliens, but then some film called E.T. (1982 / trailer) cleaned up at the box office and Simón was forced half-way by the producers to change the flick into a friendly-alien film. The result is properly schizoid: half the film features the aliens killing people, the other half follows the friendship of a young twerp and his newfound pod alien, all of it filmed ineptly. Over at Horrorwatch.com, the reviewer claims that the film actually gave him brain damage... Regrettably, no trailer of Los nuevos extraterrestres (its original title) could be found on the web. 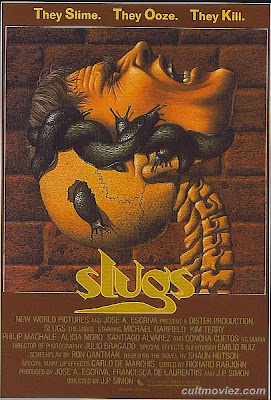 Classic Juan Piquer Simón. His masterpiece. A film that has to be seen to be believed – a description that applies to all his work, actually. Click on the title above to go straight to the review of the film here on A Wasted Life. 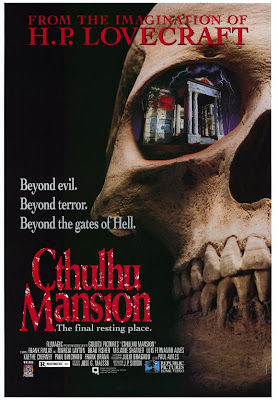 Enjoyable Juan Piquer Simón. Supposedly based on H. P. Lovecraft, which is a bit like saying, dunno, Our Man Flint (1966 / trailer) is based on a book by Ian Fleming. Some thugs at a carnival kill a dealer; to escape they carjack the carnival's magician Chandou and all go to his mansion. Pissed-off demons go on a rampage. Starring the daughter of William "James T. Kirk" Shatner, Melanie Shatner, as Eva. Cheap, cheap, cheap – stupid, stupid, stupid – fun, fun, fun! 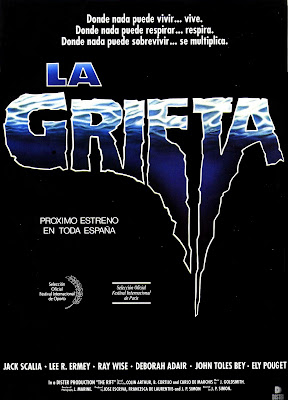 Enjoyable Juan Piquer Simón. In The Rift aka Endless Descent aka Siren 1 aka (in Spanish) La Griete aka (in German) U1 - Tauchfahrt des Todes, Ray Wise, R. Lee Ermey and Jack Scalia join Simón in jumping on the wave of underwater thriller/horror films that came out around 1989, a list that includes such crap as The Abyss (1989 / trailer) and such fine stuff as Leviathan (1989 / trailer), Deepstar Six (1989 / trailer), The Evil Below (1989) and Lords of the Deep (1989). In The Rift, the submarine Siren II is sent down to a mysterious undersea rift to find out what has happened to Siren I, which disappeared there. They find a lot of monsters and the gore flies... 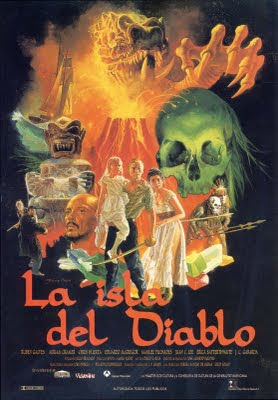 Know absolutely nothing about the film – but it is surely just as entertainingly cheesy as all his other films. Anyone want to fill in the blank? 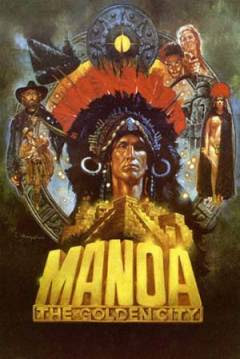 Know absolutely nothing about the film – but it is surely just as entertainingly cheesy as all his other films. Anyone want to fill in the blank?
Posted by Abraham at 8:53:00 AM