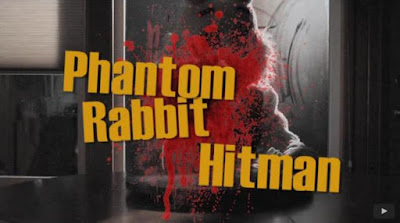 Hey! Happy Easter. Here's a short film chosen not only because we find it funny and entertaining, but because it's that time of year when people think bunnies. And candy. And candy makes you fat. And this short film has a fat man and a bunny — a bunny with guns, actually. And that's a concept we find almost as good as Nude Nuns with Big Guns (2010 / trailer).
Directed by some guy named John Fitzpatrick, who cowrote with some other guy named Tyler McCoy, this version of Lagomorph: The Destructor is the "director's cut". We don't know what's up with Tyler, but John resides in Los Angeles with his wife and producing partner Sarah. (We couldn't find out the name of his wife.)
Lagomorph: The Destructor went on to spawn a web series of short films about the Phantom Rabbit Hitman, image above, which seems to have lasted 13 episodes between 2010 and 2014. (You can watch them here.)
Lagomorph: The Destructor is an obvious homage to that snoozer of a Michael Man film, Collateral (2004 / trailer), but better. (It also includes an homage to Psycho [1960 / trailer], actually: can you find it?)
There's no real story in this short, if you get down to it, but it is fun and weird and seasonally appropriate — which makes it a perfect Short Film of the Month for A Wasted Life. Watch and enjoy. We did.