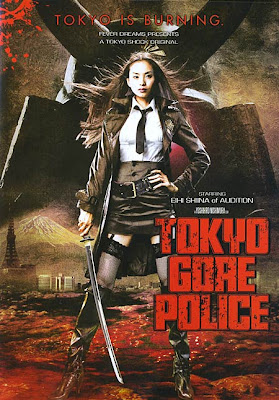 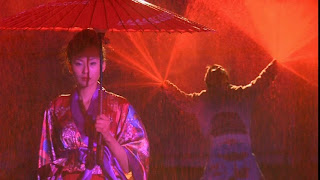 As far as we can tell, Tokyo Gore Police is the first feature-length gore film directed by Japanese special affects master Yoshihiro Nishimura, "the Tom Savini of Japan," who a year later brought us the Pop Art gore masterpiece Vampire Girl vs. Frankenstein Girl (2009) and, three years earlier, was a major player in the special effects of the industrial splatter film Meatball Machine (2005). (True, director Nishimura did direct the feature-length film Speakerman: The Boo [trailer] in 2004, but that low-budget oddity is far more an example of a psychotronic kiddy film than true gore.) Here, with Tokyo Gore Police, he remade his 1995 gore short Anatomia Extinction (1995 / scene), changing the plot enough so that the two films almost come across simply as two narratives set within the same dimension and time-frame. 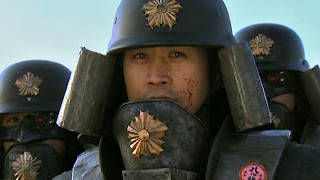 In tone and tale, Tokyo Gore Police is far darker and more of a downer than the oddly joyous splatter fest that is Vampire Girl vs. Frankenstein Girl, but that is not to say that TGP is any less amazing. Like virtually all movies that have Nishimura's name connected to them, TGP is bizarrely over-the-top and creatively unbridled, with no idea seemingly too perverse, too weird or too stupid to be included as long as it can somehow be staged. Thus, this movie — which definitely lives up to its name — includes everything from acid-spraying boobies to an alligator vagina to a massive pink and fleshy bazooka dick to a man using the blood gushing from his cut-off legs as a jet-propellant to fly through the air. Many times throughout the movie, Hieronymus Bosch definitely says hello — particularly the armless and legless doggie-girl that the chief of police keeps is an idea that readily brings to mind any number of the great painter's nightmarish tableaus. 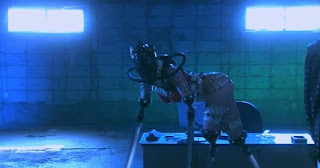 Paul Verhoeven's sci-fi masterpiece RoboCop (1987 / trailer) also says hello in the movie, as Tokyo Gore Police not only shares that film's plot device of a privatized police force but also lightens up the oft-grim events of the narrative by interspersing satirical TV advertisements. But whereas most of the cops in RoboCop are still good guys on occasion, those of Tokyo Gore Police all reveal themselves by the film's end as little more than blood-thirsty killers: the only difference between them and the mutated humans they hunt is that they wear a uniform (a metallic body-armor inspired by the traditional warrior get-ups of centuries past). 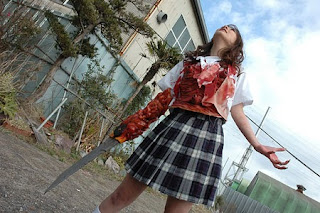 But at the beginning of the movie, this blurring of good and evil is not yet clear, though the tone and setting of the film is immediately clear: in a near future Tokyo, a squad of police convenes on a rooftop to put down a cannibalistic mutant but is overwhelmed by the seemingly unstoppable killer with a bio-chainsaw arm. To the rescue comes the mini-skirted heroine of the movie Ruka, (a lovely-looking but oddly vacuous Eihi Shiina, the demure nutcase of Audition [1999]), who is carrying a lot of psychological baggage due to the killing of her father (Keisuke Horibe) directly in front of her eyes when she was a wee lass... 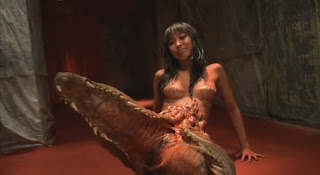 Unlike the average splatter films of the Western world — with the exception of the occasional rarity like Peter Jackson's Braindead (1992 / trailer) — the gore and splatter of TGP, like so many a contemporary Japanese gut-geyser, is seldom realistic and always ridiculously exaggerated. And what you see in the opening scene is pretty much what you get throughout the film: geysers of nonsensical guts and blood, later augmented by oft-perverse and always fascinating and nightmarish bodily mutations. On occasion the film also almost seems to be trying to exercise some sort of social critique by acting as a kind of monstrous funhouse mirror reflecting heavily distorted visualizations of sexual decadence, fascism, social irresponsibility and other less-desirable aspects of contemporary society, but the thin threads of serious commentary are usually lost in the over-abundance of ludicrous techno-gore and bio-splatter. 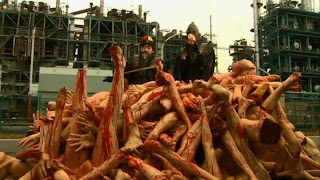 But then, one seldom pops a film with a title like Tokyo Gore Police into the DVD player 'cause one is looking for a socially conscious statement movie. The title promises gore, and the film delivers it — in excess, with hefty dollops of bizarre perversity and surreal black humor. The occasional serious aspects of the narrative might not jell all that well and do little to flesh out the characters (who are all one-dimensional) but they are relevant to the plot. The film could really have used one or two additional likeable characters, but on the other hand that would have detracted from the film's main reason of existence: to amaze and entertain with a glorious excess of blood, gore and insane concepts. 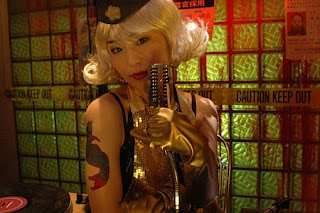 And that TGP does in spades, even as it retains an oddly depressing tone until the end, an ending that promises a sequel that has yet to come... the spin-off short 63 Minutes Later (2009), after all, does not directly follow the events of TGP but rather simply narrates how three characters became the bio-techno monsters that they are in the first film. 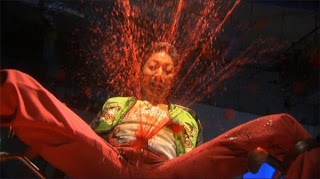 Tokyo Gore Police is heartily recommended to gorehounds and fans of weird cinema and anyone that fits in-between the two — and is definitely to be avoided by everyone else.
Posted by Abraham at 3:37:00 PM