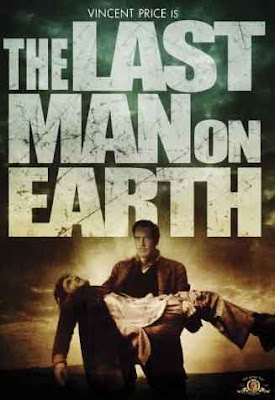 "You're freaks, all of you! All of you, freaks, mutations!"
Robert Morgan 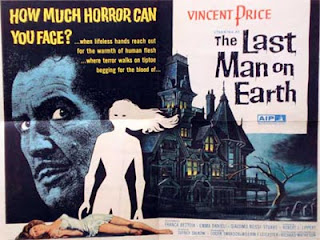 The Last Man on Earth is a minor horror classic well worth watching that was more or less doomed to total obscurity until it fell into the public domain in the US and suddenly enjoyed a massive DVD release by an untold number of cheap DVD firms. Interest in the film was also spurred after it became general knowledge* that the book and film were inspirational to George Romero in the creation of his own full-fledged classic horror film from 1968, the original Night of the Living Dead (full film), which is also now in public domain.

In its positive review of the film, the website Bad Movie Report claims, like many, that The Last Man on Earth is the "Zombie Movie Zero", but even if the film is perhaps one of the key influences of the slow-moving killer zombie genre, the creatures in the film are not zombies, they are vampires – or at least, vampiric, a point worth noting as the fact they are not actually dead (and even capable of reproducing sexually) is important to the original ending of Richard Matherson's 1954 science fiction horror novel I Am Legend and this movie, the first of four cinematic versions to date.

Yes, Virginia, there is a book upon which Will Smith's mostly crappy big budget I Am Legend (2007 / trailer), as well as the exploitive, violent and fun rip-off I Am Omega (2007 / trailer) and the entertaining slice of 70s Armageddon cinema The Omega Man (1971 / trailer), are based. Of the four films, some follow the book more closely, others hardly follow it at all, but only one – The Last Man on Earth – had the balls to follow the depressing and extremely non-commercial ending of Matherson's book, the last line of which is the source of the book's ironic title. 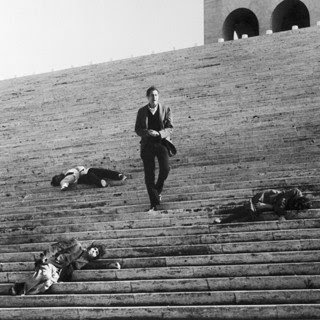 But then, Matherson had his hand in the pie when the film was being made: the film script was written in part by Matherson who, dissatisfied with the end version, used his occasional nom de plume Logan Swanson for the credit. He also felt that Vincent Price was miscast as Robert Morgan, the lead character of the film, which this is true: Price, a man capable of excellent acting turns (see Witchfinder General [1968 / trailer], Theatre of Blood [1973 / trailer], The Masque of Red Death [1964 / trailer], Kansas City Confidential [1952 / full film] or Laura [1944 / trailer], to list a few of many great acting turns), is extremely uneven throughout the film and particularly weak in virtually every pre-apocalypse scene. It is a credit to the film that despite Price's less than satisfactory performance, the film still packs a punch… but then, had Price had a somewhat better director than Sidney Salkow, perhaps he would've also given a stronger performance. 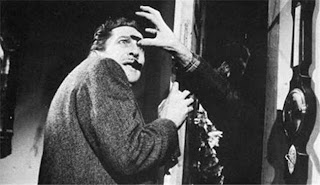 Salkow, who began his career why back in the days of Poverty Row and honed his style doing second features before finding his later niche as a television director, had a relatively staid and immobile style that fit well to TV production methods; along with his other horror film, Twice-Told Tales (1963 / trailer) an anthology film based on the horror tales of Nathaniel Hawthorne, The Last Man on Earth is possibly his only feature film release of any note. But although his rather staid direction does not sink this film, one is left with a feeling that The Last Man on Earth would have been well served with a somewhat less dull camera work, particularly during the final scenes. 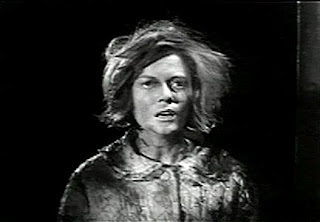 That said, many of his long shots, particularly in the scenes in which Morgan (Price) is pursuing the dog, the first sign of normal life that he seen in ages, through a deserted and properly retro-future deserted city, do capture the loneliness that the last man on earth would surely feel and experience. One wonders, however, who's to blame for the bad and inconstant day-for-night shots; more than one scene seems to flip back and forth due to the lousy grasp of the shooting technology. (Sidney Salkow, by the way, is only credited for the direction in the English-language prints of the film. The direction of The Last Man on Earth, filmed in Italy, is credited to Ubaldo Ragona in the Italian prints, one of the co-writers of the screenplay. Going by past and prior credits, however, it is questionable at best whether Ragona really did anything other than translate the directions of Sidney Salkow to the Italian crew and cast.)

Though filmed in Rome and Lazio, Italy, the events of The Last Man on Earth take place in good ol' USA. Robert Morgan (Vincent Price) is the last man on earth, or at least the last truly human man. The film opens by showing the obviously bored and depressed man go through his daily grind of replacing garlic wreaths and broken mirrors, fixing the boards on the boarded-up windows of his home, taking the dead from his front lawn to the local burning pit, sharpening stakes. By day he hunts and kills those that seek his blood by night, vampires one and all. The life he lives is joyless and, in all truth, rather pointless – but then, what kind of life can one have when one is the last of one's kind and living in a world overrun by somnambulant and less-than-intelligent vampires? 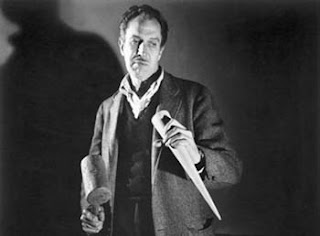 Midway through the film, the flashback kicks in to reveal how Morgan came to be in his situation. A happily married scientist with a loving wife named Virginia (Emma Danieli), he is part of a team trying to find a cure or vaccination for a deadly virus blowing over from Europe that first kills and then turns its victims into vampires, hungry for blood but averse to sunlight, mirrors and garlic. Morgan alone remains immune, possibly due to being bit by a virus-carrying bat many years previously. He loses his daughter and he loses his wife, but it is his former best buddy and coworker Ben Cortman (Giacomo Rossi-Stuart of, among other films, Caltiki the Immortal Monster [1959 / trailer], Death Smiles at a Murderer [1973 / trailer], Die Grotte der lebenden Leichen [1971 / trailer] and the great Mario Bava classic Die toten Augen des Dr. Dracula / Kill, Baby, Kill! [1966 / trailer / full movie]) who later comes banging at Morgan's doorway every night moaning for his blood. (Perhaps one of the most truly Gothic horror moments of the film is when Robert, sitting alone at home after having illegally buried his deceased wife, hears her low rasping voice asking to be let inside the house.) Into his lonely life a dog does cross his path, but the joy of new-found company is short: it, too, is infected. But then, unbelievably enough, he spies a woman walking in the sunlight. Her name is Ruth (Ugo Tognazzi's wife Franca Bettoia), but there is something odd about her: yes, she can walk in the sun and look into the mirror, but garlic makes her ill and she is surprisingly unsympathetic to his vampire-killing activities – and how did she survive for such a long time?
Well, watch the film and find out. 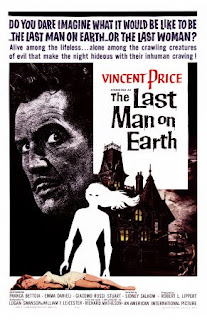 The Last Man on Earth is an interesting film and possibly a seminal film in regards to modern horror, which is why it earns its place as a minor classic. But it is also an uneven film, and though the most true to the original source of all the films yet made, it suffers some glaring flaws. As mentioned above, Salkow's direction and Price's acting are weak and there are some serious technical difficulties in the filming. Worse, possibly, is that the shuffling vampires are never truly threatening – hell, the barricades of the house in which Morgan resides are hardly even worth mentioning – despite their effective slow shuffle. For that, there are truly effective aspects of the film, including the presentation of drudgery of Morgan's life, and occasional moments and scenes of true horror as well as an effectively hard-hitting ending similar to that of the book. (A few other flaws cannot be brought up without fully revealing the big twist, so for the sake of the few who don't know it, those flaws will not be tackled here.) But the sign that The Last Man on Earth is a film well worth viewing is that it remains in your mind long after it has ended, something many better-made films do not – and something that none of the other filmic adaptations of I Am Legend manage to do.

*Just how factual this "general knowledge" is, is debatable: while there are obvious similarities in the vampires of The Last Man on Earth and the zombies of Night of the Living Dead, possibly intentional, as far as I can tell there is no documentable substantiation that the former inspired the latter that, so to say, comes directly from the horse's mouth – just articles about the film that claim Romero has said it without saying where he said it. Anyone out there know the source?

Full film at the Internet Archives:
Posted by Abraham at 5:09:00 PM