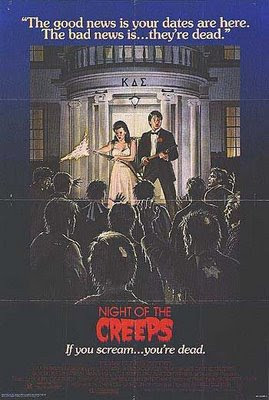 (Spoilers.) Somewhere in the midst of Night of the Creeps, Fred Dekker's directorial debut, Detective Cameron (Tom Atkins) asks, "What is this? A homicide, or a bad B-movie?" The correct answer, in both cases, has to be a resounding "No!" For the dead in Night of the Creeps are not simple homicides, but rather walking dead who have been taken over by mind-controlling slugs, and while the film is indeed a B-movie, it is hardly bad.

No, Fred Dekker's enjoyable homage to the tacky films upon which he teethed as a child is everything but bad—even way back in 1986, when the flick came out and was almost universally panned by critics, true purveyors of skid-row trash theaters could recognize what was flickering across the screen: a truly unique, entertaining, tongue-in-cheek and blood-drenched gem that played with the genre vocabulary even as it delivered the goods. Regrettably, word of mouth hardly stopped the film from being a flop, but it did, over the years, turn Dekker's film into a popular cult film with a (justifiable) lasting reputation. (And an influential cult film at that, as can be seen by such contemporary genre black comedies such as Slither [2006 / trailer].)

The insider references that pepper the film could fill a term paper, but luckily Dekker—who wrote the film as well—was smart enough to know that for a film to be good, it also needs a lot more than just characters named after famous genre directors or a credits sequence typeface cribbed from EC Comics. Thus, in a time-jumping narrative that could easily have fallen apart if incorrectly handled, Dekker manages to stuff some fine characterization, great dialog, and sight gags that still work as well today as they did when the film came out in 1986 (even if the 80s' style comes across as quaint now as the 50s' style).

The opening scene alone is a good example of both what makes Night of the Creeps so much fun and, in turn, possibly un-understandable for the masses when it first came out. How often does a walking-dead flick open with a persiflage of an aliens-in-space flick? In this case, out in space two half-naked pink-skinned midgets with faces no mother could love are chasing a brethren-alien carrying a canister. Luckily the alien-speak is subtitled (in both alien and English), so the viewer can follow that the alien with the canister is the bad alien and those in pursuit are trying to stop him from releasing something terrible. They fail, and next we see the canister twirling through space and down to earth, where it lands in the B&W fifties in a delightful homage to the original Blob (1958 / trailer), only this time around the gal—who has just dumped her loser policeman boyfriend for the college jock—gets axed by a passing-by escaped psycho and the jock swallows a slug from outer space.

With that the flick jumps forward to the (then contemporary) 1980s, where the rest of the film takes place and all the loose ends introduced in the first scenes slowly tie together into a fine crescendo of witty gore and horror laughs full of unexpected and expected turns. Chris (Jason Lively) and J.C. (Steve Marshall) are two collegiate nerds who decide to join a frat because Chris thinks it's the only way to impress Cynthia (Jill Whitlow), a spunky girl dating the college asshole Brad (Allan J. Kayser). Though the frat has no intention of ever accepting a nerd and a "cripple"—J.C. needs crutches to get around—they set the boys up to steal a corpse from the local hospital, which just happens to have a cryogenics lab in it. The corpse they end up stealing is no less than the young parasite-infested guy from the fifties, whom they promptly drop and leave behind as they run away "screaming like banshees" when it begins to move. Mr 1950s shambles back to college before his head explodes, releasing the slithering slug-like parasites into the world. 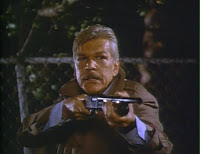 It seems that the parasites take control and lay their eggs in the brains of their victims, where they eventually hatch out in a burst of brains. At this point, the cynical Det. Cameron (Tom Atkins) enters the scene, full of bad attitude and one-liners, hardened by the broken heart his axed ex-girlfriend left him with back in the 50s. Next to be animated in the dead axe-murderer that Cameron secretly killed and buried decades ago, but soon the number of walking dead begins to increase. J.C. kills himself when he is taken over, but not before he discovers and passes on to Chris the method for killing the parasites. Chris and Det. Cameron then join forces to destroy the extraterrestrial threat, which has since managed to infest a busload full of jocks. The big showdown is at Cynthia's sorority, where Cameron, Chris, and Cynthia take on the zombies with a flamethrower, shotguns, and a lawnmower and this following classic dialog is exchanged:


Funny, horrific, quick, intelligent, bloody and complete with a discreet nude scene, Night of the Creeps, a film made by a genre lover for genre lovers, is without a doubt one of the best genre films of the 1980s. Which is not to say that it will only appeal to genre fans. No, in his directorial debut Dekker manages to walk the fine line between film geekdom and delivering teensploitation goods and thus delivers a film that can easily entertain both the genre novice and the hardened genre old-timer. 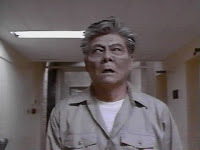 If you haven't seen Night of the Creeps yet, you should, for you are truly missing a great film. And it really doesn't matter which ending you see: The scrapped original ending of a burnt Det. Cameron stumbling into a graveyard before his head explodes and a spaceship starts searching the ground (which actually makes a rather pleasing full circle in the narrative), or the more depressing (and slightly dissatisfying) cheap-scare ending that made it to the theaters back in '86 in which Chris and Cynthia obviously don't live happily ever after. 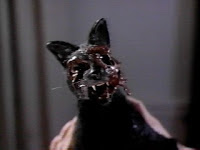