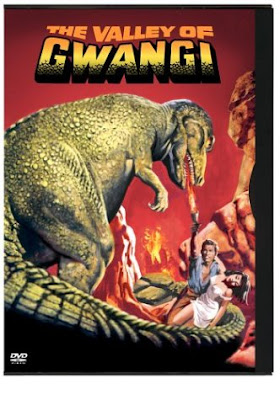 "Don't you see... we must follow the gypsy trail to the forbidden valley because where there is one eohippus there must be others. At least two, the sire and the mare, possibly more. Just think what you and Miss Breckenridge could do with a dozen eohippi?"
Professor Bromley

(Spoiler alert.) There seems to be an unwritten rule amongst film fanatics that any production touched by the magic hands of Ray Harryhausen is sacred, almost beyond critique. Well, although the man who produced such wonderful and timeless masterpieces as The Seventh Voyage of Sinbad (1958 / trailer), Jason and the Argonauts (1963 / trailer), The Golden Voyage of Sinbad (1974 / trailer) and Sinbad and the Eye of the Tiger (1977 / trailer) really did know how to create magic with stop-motion animation, there is a reason why The Valley of Gwangi has remained one of his least-known film, and it is not just due to the supposed fact that upon its original release it was relegated to the bottom half of an adult-oriented double bill despite obviously being a kiddy film. This film has remained an obscurity primarily because it simply isn’t very good. Even when given leeway due to its intended audience, the movie still reveals itself as substandard in regards to script, direction, acting, character development and logic.

Legend has it that the idea of the movie comes from an ancient, unproduced script written by Harryhausen’s mentor Willis H. O’Brien (best remembered today as the man who brought the original King Kong [1933 / trailer] to life) entitled Valley of the Mist that Harryhausen found amongst his stuff when cleaning out the garage. Fact is, however, a low-budget cowboys vs. dinosaurs flick was indeed made from the O’Brien's idea in 1956: entitled The Beast of Hollow Mountain (trailer) and shot back to back with a Spanish-language version, the film is virtually forgotten today and commonly referred to as "not as good as The Valley of Gwangi" — which means it must be pretty bad. For as appealing as the plot concept is in itself, the version that made its way to the big screen in 1969 is not. Whether due to the ancient source or the final script delivered by television scribe William Blast, the film is an unpalatable muddle.

Of course, the Harryhausen sequences of animated dinosaurs are top notch and fun to watch, but the film itself is such a painful dull mess that the movie is often a painful bore. But to the film’s disadvantage, the production itself is just good enough to also prevent the film from slipping into the realm of cheesy fun, of being so bad that it is good. Okay, maybe the kiddies might like it, but if you plan to watch alongside them, then you would be better served to rent one of Harryhausen's mythical swashbucklers. In regards to Harryhausen magic, The Valley of Gwangi has too little, too late — and in between, there is nothing but predictability, right down to the racist evil stereotypes.

Filmed in Spain, the story takes place at the turn of the century somewhere south of the US border. After a dark, badly filmed intro in which Carlos (Gustavo Rojo) defies the curse of the forbidden valley and disappears with an eohippus (that’s the great-great-great-great-great-great-great granddaddy of the horse, for those who don’t know), the credits roll and a third-rate Wild West show arrives in town — showing a lotta leg during the parade, considering the time frame, but that’s OK. Tuck Kirby (b-movie veteran James Franciscus, who displayed a great bod two years later in Beneath the Planet of the Apes [trailer] but died of emphysema in 1991) is also in town. An ex-stuntman of the show and one-time main squeeze of the show’s owner TJ (a talentless Gila Golan who, smartly enough, married well and retired directly after this movie), Tuck wants to buy the show’s talented performer Omar, The Wonder Horse for Buffalo Bill. At first TJ is all injured emotions, but after Tuck gets scratched when saving Lope (Curtis Arden), the movie’s mandatory child, her muff warms up again. She shows him El Diablo, her great white hope and future savior of the show — nothing less than the little eohippus, which Carlos, hot to jump on her bones, has given her as a sign of his affection. Of course, Prof. Horace Bromley (Laurence Naismith), a tippling paleontologist just happens to be in the area, and when Tuck shows him the four-legged wonder the plot finally begins to move a little. Carlos refuses to reveal where he got the tiny critter, so the two go to the unfriendly neighborhood gypsies — led by the blind gypsy Tia (Freda Jackson, best remembered as the evil servant in The Brides of Dracula [1960 / trailer]) — who are just as unhelpful. Behind Tuck’s back, Bromley instigates the gypsies to steal the wonder horse so as to follow them to the place they return it. 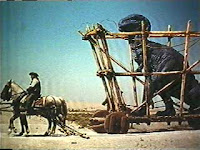 Tuck catches them in the act and, unable to stop them, sets off in hot pursuit. Carlos lays the blame of the theft on Tuck’s shoulders — one can only assume he does so out of spite, for truly, Carlos must be able to recognize his own brethren — so soon TJ, her partner Champ (Richard Carlson of It Came From Outer Space [1953 / trailer] and The Creature from the Black Lagoon [1954 / trailer]), Carlos and two others are hot on his trail. Before long they are all in the forbidden valley, where they promptly run into three dinosaurs and find out that they, stupidly enough, have only brought the blank-shooting prop guns of their western show. (The first dinosaur that they run into is a pterodactyl which, although previously strong enough to make off with a donkey, is too weak to successfully fly off with Lope in his clutches. Carlos ends up killing the creature by twisting its neck.) 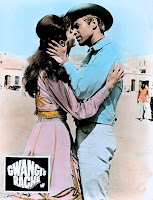 All this leads up to the movie’s most famous scene of six cowboys on horses trying to lasso Gwangi, an allosaurous. Of course, the first attempt to capture the mad meat-eater fails and Carlos ends up being dinosaur food — but then he was a rat anyways, and maybe even a Mexican. When Gwangi tries to follow the survivors out of the valley, he ends up knocking himself out, so before you can ask “Hey, where did they suddenly get all that equipment?” he is being trucked back into town to take part in TJ’s wild west show. Tia does not take kindly to this, and at the creature’s premiere she has her faithful dwarf (Jose Burgos) servant release the angry allosaurous onto the audience of the full arena. (The dwarf gets eaten for his trouble, but Tia simply falls over and disappears, possibly trampled to death by the fleeing masses.) People run hither and wither, and the Professor gets flattened because, like an idiot, he runs towards the creature rather than away. Everyone who doesn’t become allosaurous lunchmeat runs into the local cathedral, the critter hot on their trial. Exiting the back entrance, Tuck plays tag with the critter before it is locked into the cathedral and barbecued. Lope cries for some strange reason and the film ends…

That Lope un-understandably cries is one of the more logical aspects of the film. Why do the gypsies steal the miniature horse halfway through the flick instead of stopping Carlos in the opening scene? Why does Tia release the creature? How can the dwarf get close enough to do so? Why does the Professor run to the cage instead of away? Why don’t the pterodactyls ever fly out of the valley? How could they ever even originally start the pursuit with prop guns? Why doesn’t anyone simply lock the gates of the arena and thus stop Gwangi’s mad rampage from even beginning? Why are there no real weapons around at that time as well? Why are Mexicans in older westerns always evil? Etc, etc, etc. As mentioned before, the script is lacking. But it is the fact that everything else is also lacking that harms the film most of all…
Posted by Abraham at 1:58:00 PM