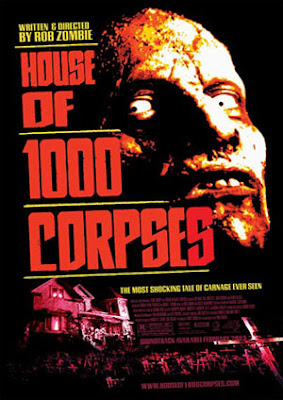 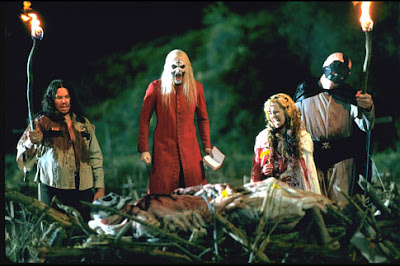 It is a mistake to come to House of 1000 Corpses by way of The Devil's Rejects, Rob Zombie’s 2005 sequel to this, his debut horror film (which was shot in 2000 but released in 2003). The Devil's Rejects is a mean, lean slab of Americana horror: a morally indefensible and nasty road movie that wallows in its torture-porn predilections as much as it does in its often arty visuals, pop aesthetic, and nihilism. A gaudy, graphically and unrelenting violent film with a sly sense of humor and streamlined narrative, The Devil’s Rejects is a well-made film of no socially redeeming value that easily whets the viewer’s appetite for the director's initial cinematic foray—for surely, if the sequel is that good, then the first film to feature this family band of psychotic, murdering hicks has to be just as good or better, doesn't it? 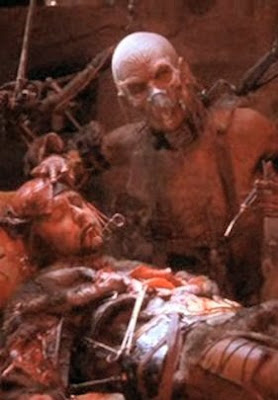 Well, no, it doesn't. And, in fact, it isn't. A good twenty minutes shorter than its sequel, House of 1000 Corpses nonetheless seems twice as long. And why? Well, although Zombie's talent with actors and the camera is also very much evident in his first film, what is missing is the narrative proficiency of the sequel. Like The Devil's Rejects, House of 1000 Corpses is mean, but unlike Zombie's second film from 2005, it isn't at all lean. It's an incomprehensible and meandering mess that loses its way in a cascade of citations and film homages, and which, in the end, can't seem to decide if it's a hick-horror film ala the numerous The Texas Chainsaw Massacres (to which it owes much of its plot) or a supernatural-killers-in-the-basement movie. In this sense, it fails on the same level as Mike Mendez's first film The Killers (1996 / trailer) does: too many ingredients. And though the ingredients might be good on their own or when mixed more selectively, thrown in all together and in excess they never manage to harmonize. As a result, unlike in The Devil's Rejects, all the interesting visual tricks of the trade that Zombie picked up as a music video director—slow motion, stock footage, split screen, solarization, filters, etc.—seem less like an added attraction than a smokescreen meant to hide the film's narrative flaws. 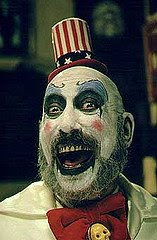 After an inanely entertaining but out-of-place robbery-gone-wrong scene, two couples in a car stop at a cheesy roadside attraction run by an obviously wacko man named Captain Spalding (cult fave Sid Haig) who regales them with the tale of the nearby location of the tree upon which the legendary Dr Satan was hung to death. Like the idiots that they are, the four victims-to-be follow the map scribbled by Spaulding and drive out into the dark and stormy night to find the tree—and even pick up a hot blonde hitchhiker along the way (the delectable Sheri Moon Zombie as Baby Firefly). A shot-out tire later, the four teens get to meet the entire crazed Firefly clan, a family that turns out to be as sadistic as they are murderous. Needless to say, no idiot gets out alive—but before the four teens (and a few other secondary characters) all meet their maker, two get treated to an underground hell full of mutilated nutcases, an oversized half-naked and axe-wielding killer, and the mutated Dr. Satan himself. 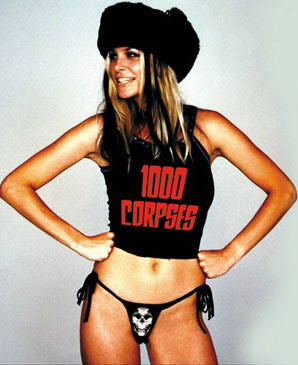 In the end, although House of 1000 Corpses shares many of the traits that work so well in The Devil's Rejects, in Zombie’s first film they never properly congeal at any level. Despite the skin and blood and violence and nihilism and aesthetics and the obvious good hand with actors, the film not only gets lost in its overly referential and scattered story but—worst of all—actually begins to bore. But to give credit where credit is due, although House of 1000 Corpses may be a failure on the whole, it does nonetheless offer evidence that the director himself is indeed talented and is probably capable of doing something much better—which is exactly what he did with The Devil's Rejects. 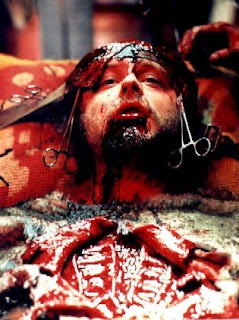